No shortage of the freckled fish in Terrebone Parish

While anglers on the southeastern end of the state are grinding their teeth over the scarcity of speckled trout caused by the freshwater deluge from the Lake Pontchartrain Spillway, anglers in the Cocodrie area are unaffected and enjoying the best speckled trout action they’ve seen in years.

Capt. Tommy Pellegrin of Custom Charters (985-851-3304), says the whole area is teeming with the freckled fish.

“Right now the action is incredible,” Pellegrin said. “We’ve usually got our limits by 9 – 9:30 in the morning, and often even before that.

“The trout are actually everywhere from the Ship Channel and throughout Lake Barre and Terrebone Bay, at every wellhead, island, reef and point. I tell everyone the easiest thing to do is just look for the birds and fish under them. You’ll find some birds feeding over gafftops, but there are plenty trout under other flocks. And it doesn’t have to be a big flock of birds. We’re catching fish where we see just one or two birds diving, because where they’re diving, shrimp are jumping.” 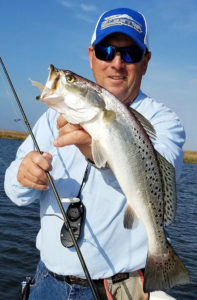 Pellegrin said all the trout are smaller this time of year so you’ll have to cull through  the undersized fish, but there’s plenty keeper size in the mix.

“I love seeing so many smaller fish because that means we’ll have a fantastic fall and spring also,” he said.

Pellegrin said right now the winds and tides don’t much matter, and while live shrimp is always a good idea, the smaller specks will inhale plastic as well.

“Carlis over at Outlaw Baits has live shrimp, and we’re also using the Berkley Rattle Shrimp in the Coastal Candy color with great success, and we fish everything under a popping cork,” he said. “As for winds and tides, we’re catching fish on incoming and falling tides, and even on slack tides. And they’re eating up bait on winds from all directions, and even on windier days as long as you can safely fish, you’ll find them.”

About Rusty Tardo 359 Articles
Rusty Tardo grew up in St. Bernard fishing the waters of Delacroix, Hopedale and Shell Beach. He and his wife, Diane, have been married over 40 years and live in Kenner.