Zach Dubois, owner of Cajun Lures, really likes consistently catching fish, mostly speckled trout, on one of the soft-plastic artificial lures he has been designing and producing for about five years.

Dubois, from Kaplan, and other serious anglers like it so much he decided to make it even better a few months ago when he had the mold retooled for the Mad Minna, a cocahoe-style, soft-plastic swimbait with a pronounced “boot tail,” as he describes it, that really thumps. The new, improved version should be available this month.

“Yeah, I’m in the process of redesigning it. I’m not changing the action or the profile shape of it. I’m simply improving it,” Dubois said. “I’m adding more features to it. As we speak, I’m going back and forth with the machine shop in Lafayette,” noting that was important because the new mold will be able to handle color combinations.

The Mad Minna is 3 inches long. It has proven ultra-popular among speckled trout and anglers chasing them across the Gulf Coast.

“I’ve been (at) it a while now. It was probably one of my first baits when I started in 2015,” Dubois said, adding that, at the time, his lure-manufacturing venture was known mostly for its bass-fishing soft plastics, or, as he called it, “freshwater stuff.”

“It didn’t really take off until about a year or two later when more people started using it for saltwater fishing,” he said. “It’s always been a good bait. It’s got a different tail action than some other baits on the market.”

Dubois’ mindset in retooling the soft-plastic bait was to improve it. The change will allow him to produce laminated Mad Minnas and different-colored tails for Mad Minnas.

When Dubois targets speckled trout and/or redfish, he can switch colors first before going to another lure, he said.

It isn’t all about the new mold.

“Another feature I’m adding is a little hookfin at the top. That way, when you run the jighead along the body of the bait, you know exactly when to come out and rig it perfect-center every time,” he said.

He believes the feature should appeal to anglers casting to a school of speckled trout. After catching a fish, they will be able to impale their Mad Minna inline to keep it running true and get back to casting quicker, which can make all the difference in the world.

The “boot tail” is an integral feature of the Mad Minna.

“It’s a paddletail, but it has a curviness to it for more of a hard thump. You can feel it in your rod when you’re reeling in,” Dubois said. 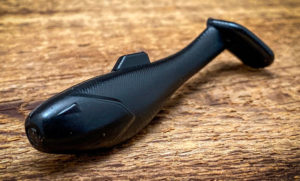 The Mad Minna is one of his favorite go-to baits when fishing for speckled trout and redfish, he said. Many others feel the same way.

“Quite often, whenever I’m speckled trout and redfish fishing, that’s what I start with. I switch colors until I get bit,” he said.

The bait also takes a toll on the bass population, he said from personal experience.

“It’s a pretty good pond bait. I’ll use it quite a bit in the fall for bass fishing, as well as for speckled trout,” he said.

For more information on the Mad Minna and other Cajun Lures products, go to cajunlures.com or contact Dubois at cajunlures@gmail.com.