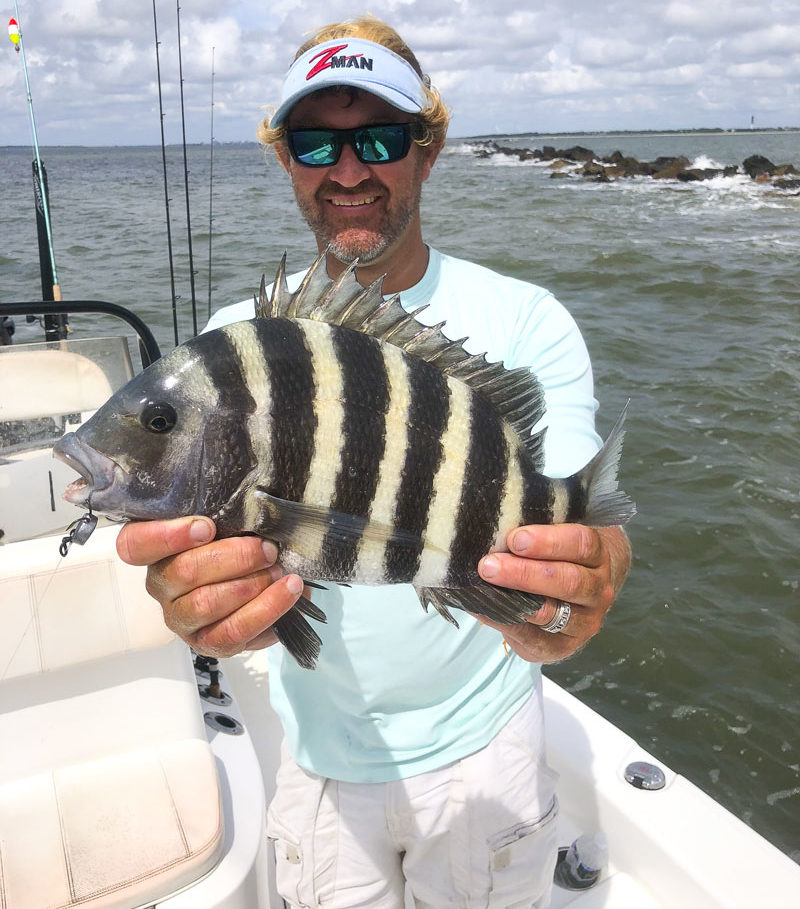 Live bait is where it’s at for most sheepshead anglers, but there are a couple of fake baits that will put these toothy critters in the cooler.

For every fish that swims in the ocean, there’s an artificial bait designed to catch it. For redfish, trout and even flounder, that’s a no-brainer. The market has tons of lure varieties for inshore fishing —

until it comes to sheepshead.

If the local bait shop is out of fiddler crabs, a few anglers may opt for live shrimp, and a few old salts may grab a shovel and go knock some barnacles off a dock or dig up some sandfleas. But if bait is unavailable, most anglers target something else, because there just aren’t any artificial baits designed to target sheepshead.

One of the biggest reasons for this is that sheepshead are picky eaters. True, they eat crabs, barnacles and a variety of small crustaceans, but how do you make a replica of a hardshell bait that doesn’t move much, if at all?

Enter Justin Carter, a kayak fishing guide who traded in his paddleboat for a powerboat in recent years, but not before his international kayaking adventures introduced him to an Australian bait called the “Cranka Crab.”

Later, Carter was approached by a Eye Strike Fishing, a tackle company based in North Charleston, S.C., to test a prototype bait that integrates live bait into a jighead specifically designed for sheepshead, the “Jail Bait” rig.

Made in Australia, the Cranka Crab is made from durable plastic with articulating arms that are replaceable. The bait is designed for the arms to float up in a realistic, defensive posture when the bait lands on the bottom.

“The original Cranka Crab has treble hooks in the arms,” Carter said. “That’s great hook placement, because the first thing a sheepshead does is grab a crab by the claw to disarm it. So on the first touch, it’s got the hook in it’s mouth.”

Carter said he contacted company director Steven Steer to ask about stronger hooks. This led to a different bait that had stronger, single hooks in the claws.

“If a redfish grabs the bait, or a good-sized sheepshead, it was breaking the treble hooks,” Carter said. “The new, single hook is both sharp and strong and will hold much bigger fish than the original would.”

Carter said one thing he has noticed about the Cranka Crab is that color makes a big difference to sheepshead. The bait is offered in eight different colors, but Carter said chinaback fiddler and muddy fiddler have been his two most-productive colors.

“Sheepshead are sight-feeders, and many times, while sight-fishing for them in clear water, you can see the fish swim up and look at the bait,” he said. “The actions on the baits are all the same, but if it’s not a natural color they’re used to seeing, they tend to shy off from it.”

The Jail Bait Rig is a hybrid artificial bait that works as a jighead to present live baits like fiddler crabs and shrimp to sheepshead. The bait is produced by Eye Strike Fishing and marketed and distributed in conjunction with Z-Man, another South Carolina manufacturer.

The Jail Bait Rig has two hooks instead of just one, and the weighted “eye” provides a platform to settle the bait, most likely a fiddler crab, but other baits can be used. A small rubber band is strung through the hook’s eye and looped over the twin hooks to hold the bait in place.

“David Fladd and I spent some time testing the prototype of the rig,” Carter said. “I thought it works best around inshore waters where the depths are shallow. The rig really doesn’t weigh enough to get a good feel of what’s happening in deeper water at the nearshore reefs.”

Carter applauds the rig for the increase in hookups compared to a single bait hook, citing a much higher bite-to-hookup ration. He also said the shine from the brightly colored eye molded into the bottom of the bait definitely gets a fish’s attention.

Both baits fish similarly, according to Carter. The first thing to try is searching around docks and pilings where sheepshead typically congregate. Drop the bait straight down on a tight line around pilings and slightly lift and shake it to mimic a crab popping up and settling back to the bottom. If casting the bait, work it like a Carolina rig with a drag-and-bump retrieve, occasionally lifting the rod tip and shaking it.

Carter’s favorite tactic is sight-fishing. He fishes the lures on clear, high water when sheepshead are up on the top of structure hunting crabs and shrimp. When he sees a fish, he casts the bait 10 feet past the fish’s location and lets the bait swing or slowly work back toward the fish.

Another productive trick is again a high-water situation when sheepshead invade grass flats to eat periwinkles. He rigs a bait under a small cork with a 6- to 8-inch leader and drifts it over the grass so it mimics a crab slowly swimming along the surface. The cork suspends the bait without it hanging up too much.

The land down under?

Carter once guided out of a kayak while competed in tournaments around the country; he performed quite well and won more than his share. In 2013, he was invited to join the USA team in the world championships in Australia.

‘I didn’t quite know what to expect fishing on the Bemm River in Australia,” he said. “The targeted fish was what the Australians call a bream, a fish that’s similar to a sheepshead. I spent countless hours researching the area and the fish and figured I’d just do the best I could.”

The effort paid off. Carter, fishing off a hunch he had about where Aussie fish would be spawning during a seasonal cold front, led the pack after Day 1 and ended up finishing seventh in the 3-day event — the leading American finisher behind six Australians in a field of more than 250. It was the bait that beat him that really got his attention after the dust settled.

“All six of the Aussie guys were using a Cranka lure; that’s where I first saw the bait,” he said. “It was a tiny bait, but an almost perfect replica of a fiddler crab or small sand crab.”

With visions of redfish and sheepshead going nuts over a bait they’d never seen before, Carter got several and took them home. The verdict? The baits worked exactly as predicted.

“The only problem was the hook issue,” he said. As it turns out, the folks at Cranka had several requests from customers for some stronger components for landing American saltwater fish. Now, with single hooks and even replacement parts for the arms and body as the fish wear the bait out, you can replace the worn parts and keep on fishing.”