Drop a shrimp and pull the lever

When you pull the lever on a slot machine, you never know what will come up. The same goes for dropping a dead shrimp in January.

Due to salinity and hydrology changes over the last several years, many areas in coastal southeast Louisiana now offer kayak anglers an un-precedented diversity of species. The lower salinities in these areas are the byproduct of coastal restoration and hurricane protection projects which have caused a mixing of fresh and saltwater species.

While many areas across southeast Louisiana are experiencing this diversity of fishing, the marshes of St. Bernard and east Plaquemine parishes are particularly flourishing. Shell Beach, Hopedale, Delacroix and east Pointe-a-la-Hache are all prime destinations for kayak anglers and each offer easy access via commercial marinas. Winter fishing in these areas is as good as it gets. All have mixed features offering ponds, bayous, lagoons, canals and pipelines for a variety of bottom structure and water depths.

Getting bites in winter

On a recent trip in St. Bernard Parish, a total of seven species were caught all within a one mile stretch of marsh. Fishing a simple bottom rig with a small treble hook and a one ounce lead sinker, dead shrimp proved to be the ticket for a tasty mixed bag. The species caught were speckled trout, redfish, bass, channel catfish, sheepshead, croaker and a black drum. Same rod and reel, same technique, and the same general area.

Slowly worked artificial lures are certainly effective in winter, but fishing in cold months like January can sometimes be slow. Fish are cold blooded and therefore more lethargic in the lower water temperatures. Soaking bait on the bottom is as slow a presentation as you can get, and is often the ticket for getting bites in the winter. Live cocahoes also work, but dead shrimp is a universal attractant and draws bites from any fish, be it fresh or saltwater species.

You can try to target specific species by concentrating on certain features and structure, but what bites is always a gamble. Want more sheepshead and catfish? Fish docks, pilings and rock piles. Bass? Stake out in front of small drains where water is falling into a bayou or pond. Trout and reds? Anchor up near the outside turns of a bayou and fish the ledges and deep holes. While these are general tactics, rest assured that sending down a bottom-rigged natural bait at this time of year has a chance of catching any of the above mentioned species — and others.

The key is patience

The key is patience and slowly fishing an area. Use an anchor or stake-out pole to get the kayak in position to fish a specific area, Using dead bait relies on smell rather than movement to attract the fish. The bait has to sit for enough time for the fish to locate it. As you catch fish, more and more smell is added to the water column as the action of the fish biting the bait squeezes oils and bits of flesh from the bait. Also, fighting fish often spit up other prey they have recently eaten. This all acts as a chumming effect to stimulate and attract fish to the area. When a fish is caught, work as quickly as you can to get a line back in the water. Long lulls between casts can often cause the bite to slow or even turn off. This is common on solo kayak trips where there are no other anglers to constantly keep the fish interested.

For consistent hook-ups, using a small, strong treble hook is key. All of these different species have different mouth structures and the small treble has proven universally effective for each. Sheepshead have a relative small mouth that is full of teeth. They are notorious bait stealers, but can easily be hooked on a small treble using a small piece of shrimp.

Winter bottom fishing is great for kayaks due to the minimum gear required. Since little casting is needed, two rod and reel combos are all that is needed. The second one is really only as a backup or in case you want to fish both at the same time.

Pre-make several bottom rigs and place them in small Ziploc bags for storage. Make up a few with one and two ounce sinkers to account for different current flows. Bottom fishing inevitably leads to snags, so you need to have replacements handy to retie and quickly get back to fishing. If you commit to a day of bottom fishing, this and a couple pounds of dead shrimp are all you need.

If you are looking to put a mixed bag of tasty fish in the kayak, head out to southeast Louisiana for a day of winter fishing that can’t be beat. The technique is simple and the gear is basic, but the rewards are delicious. 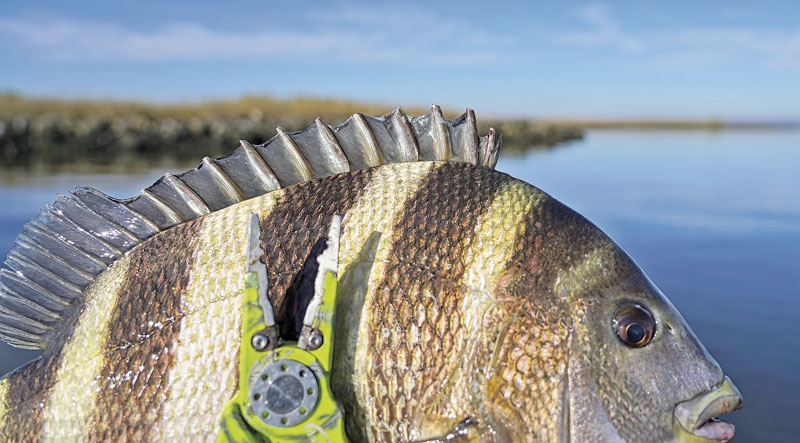 About Chris Holmes 238 Articles
Chris Holmes has kayak fished in the Gulf of Mexico, the Atlantic and Pacific oceans and many places in between.