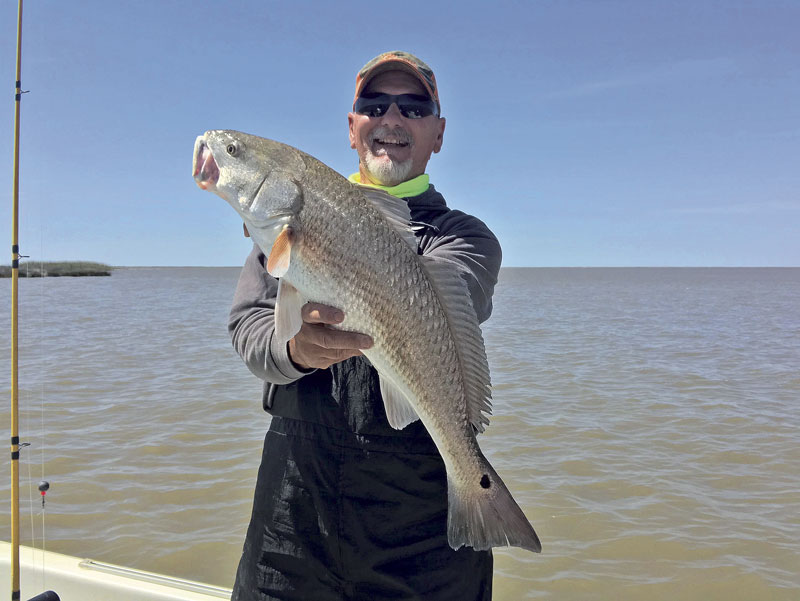 One veteran saltwater fisherman goes to lots of spots he’s learned over the years to reel in a mess of “spots” close to Vermilion Bay. He proved his approach works again several weeks ago.

Eddie Toups of New Iberia doesn’t fish spots like so many others do. Never has. Probably never will. He doesn’t have to as he catches redfish big, small and in-between.

Toups’ fishing buddy picked up on the difference in the plan of attack pretty quickly. Fishing from Toups 22-foot long Carolina Skiff, he noticed the glaring absence of a trolling motor on the bow of the boat soon after they launched at Quintana Canal Boat Landing out of Cypremort Point. The boat had Power Poles in the back and what looked like a seldom-used anchor on the bow.

There’s a good reason. He works over likely hotspots in the shallows rather than gliding to and from along the shoreline with a trolling motor.

“I spot fish,” Toups said while two to three foot seas pounded the boat and drenched its two occupants while crossing Vermilion Bay to Bayou Blanc on the east end of Marsh Island.

The 66-year-old retired shaft worker who spent 44 years at the Cargill Salt Mine on Avery Island, planned to fish his favorite spots where the Gulf of Mexico meets the southern shoreline of Marsh Island. Muddy water, thanks to spring Atchafalaya River discharge at the Calumet Cut and Atchafalaya Bay, and high northerly winds foiled his plans to hook redfish on Carolina-rigged shrimp or shrimp under a Four Horsemen Popping Cork on either side of Mound Point.

On this trip, his tried and true spots were unfishable, extremely low and muddy, despite his best efforts for a few hours after sunrise. The Delcambre native learned how to fish waters in and around Vermilion Bay as a boy with some of Acadiana’s top saltwater fishermen — his father, the late Jay Toups, Barry Semar and Charlie Myers.

And Toups learned much more on his own as he grew older. He fished around Boston in Vermilion Parish, where his father’s camp and boat landing were obliterated by Hurricane Rita in 2005, Marsh Island and Southwest Pass.

What he and so many other Acadiana saltwater fishermen realize right away is they are behind the 8-ball much of the year because of freshwater runoff from the Atchafalaya River. Each spring the swollen river delivers muddy water to what otherwise are prime fishing grounds, er, water.

“It’s not the same for the guys in the east,” Toups said. “We’ve got the Basin to deal with. They’ve got good water to stay on. It’s hard to stay on fish half the time when you can’t get on them.

“The boys to the east got it easy. We’ve got to fish bad water all the time.”

Toups, who eschews targeting speckled trout in favor of redfish, knows how good the redfish fishing is to the east. At a Bridge Side Marina Rodeo years ago, Toups and his wife, Liz, finished first and second in the redfish division with 44- and 40-pound redfish, and first and second in the drum division while fishing Coup Abel Pass. His in-laws had a boat slip at Pirate’s Cove. That 44-pounder remains his PB. They still fish the Grand Isle area often.

On this trip, Toups soon had had enough of fighting north winds, which blew the water out of Marsh Island, and muddy water at mid-morning.

After retreating inside the island to fish drains along Bayou Blanc, then parts of the north shoreline of Lake Tom to no avail, he said, “You got time? We’re going to Southwest Pass. I’m going to my bread-and-butter.”

The bumpy ride across the bayside length of Marsh Island ended when he stopped just past the point on the north side of Southwest Pass. While Toups waited for the tide to come in he coaxed a line-burner redfish. It was the first of the day at around noon and he got him to bite a headless, tailless shrimp, his peculiar way of hooking them.

He released it and said, “He hit it good. Real good.”

About 30 minutes and as many casts later he left for another spot he hoped would offer greener, and grassier, pastures as the water rose. He motored to where he, his wife and grandson, teenager Maverick Broussard, won a Southcentral Fishing Association regular-season tournament with two “slots” weighing 15.95 pounds in May 2021.

Toups started his milk run around midday on the south shoreline of Southwest Pass. He stayed long enough at the first stop along the broken marsh to boat the day’s second redfish on shrimp under a popping cork at 12:41 p.m. About 45 minutes later, a 24 ½-inch redfish made the mistake of mouthing and moving off with the shrimp. Toups’ hookset interrupted its travel.

“She’s fat, she’s heavy. That sucker was in that (grass),” Toups said.

Six minutes later, he boated an 18-incher on the C-rigged shrimp on a straight shank hook under a ¾-ounce weight. He fishes with a 7-foot-4 Lew’s fishing rod with 20-pound test Trilene Big Game monofilament line spooled on an Ambassador baitcasting reel and a 1 ½-foot long leader on 60-pound test monofilament line.

His former bass fishing days, which included wins in bass club and other tournaments, showed as he fished the C-rig. After a cast, he retrieved the shrimp through and 10 to 15 feet past the cover like it was a plastic worm, shaking it through the strands of grass in the water.

“Another thing, if you fish the grass, if you throw it (shrimp behind the weight) in the grass where you’re supposed to throw it, you’ll never catch a hardhead (catfish),” he said. “If you cast in front of the grass, you’ll (often) catch a hardhead.”

His hookset is a powerful one and always to one side.

“I feel the weight go through the grass,” he said. “When I get to an open spot, I stop it. They just pick it up. You can feel it. In that grass you’ve got to let them take it good, you know?

“I like to feel the weight of the fish before I hit on it. I want him to load up. I tell my wife and grandchildren you never want the tip to be between you and the fish. Let it bend the rod.”

Toups’ average stay at each spot was approximately 10-15 minutes, depending on the action, or lack thereof.

“If I don’t catch more than two or three fish in the grass (a particular grass bed). I move on. I don’t sit down there and wait until another little school moves in. I go hit the next one,” he said after depositing a 20-inch long redfish in the boat’s ice chest on the C-rigged shrimp, then idling to a grassy area nearby.

The next spot was a golden grass bed. At 2:15 p.m., Toups cast and within a minute he swung the fishing rod to set the hook on what proved to be an almost perfect “slot” redfish – a 26 ½-incher. That really fired him up and he kept jumping to spots.

“Oh, talk about a tournament fish. That sucker hit it good. He jumped on it,” he said after measuring it. Eligible “slot” redfish are 16 to 27 inches in SFA tournaments.

He devoted more time to that underwater grass in front of a well-defined point of grass. His next cast was the most rewarding of the day.

Before Toups went on point again, lowering the fishing rod’s tip and taking up slack, he said, in anticipation of what was about to unfold, “Uh-oh. Uh-oh.”

And he set the hook hard. The hooked redfish took off as he played it.

“I’ve got another one, boy. Look, it’s going all the way to the end over there. Look at where it’s at way over there,” he said as the redfish took off.

He deftly worked the redfish to the boat, where it met the net. He admired the 29-incher, too long for a “slot” redfish but a beautiful specimen.

Toups hooked and reeled in another keeper redfish at another grass clump near the one that gave up the two nice redfish minutes earlier. That was it. He called it a day, satisfied redfish were still in their spots for upcoming SFA tournaments and fun fishing trips as well.

Summer is here and you can partake in the fishing and camping at two facilities, Jimmie Davis State Park and Chicot State Park. […]

Ian Carter, a Sterlington High School junior, has emerged as one of the most consistent bass anglers in the Sportsman’s Paradise. […]