For most Louisiana kayak anglers, trout and redfish are the prime saltwater species, while largemouth bass are the favorite target of those paddling in freshwater. However, across the state, catfish are readily available in both fresh and brackish water and offer great sport and table fare in areas easily accessible to kayak anglers.

Rod and reel fishing for catfish is great fun, but not the only method. Jugs, limblines and trotlines are also legal fishing methods and easy to do from a kayak. Many anglers are using a combination of these methods to increase their catfish catch. Setting a trotline or limblines is a great way to add to your catch and they are easily carried and set with a kayak.

A good tactic is to set lines either the evening before, or on the morning of a fishing trip. This allows the lines to fish unattended and increase the number of fish caught while later fishing with a rod and reel. The lines are generally checked at the conclusion of the trip.

Free-floating jugs are a great way to catch catfish, but require constant attention to keep track of the jugs as hooked fish can pull them around and change their location. Unless fishing a confined area like a farm pond, the jugs need to be closely watched. However, simply adding an extra attachment line allows for jugs to be tied off to limbs, poles or other stationary objects. Trotlines and limblines are similarly tied off and passively fished while the angler is not present or is nearby actively fishing with a rod and reel.

Many coastal areas are seeing an influx of catfish due to the introduction of freshwater via diversions or other hurricane and coastal protection projects. Big catfish are showing up in areas of southeast Louisiana like Delacroix and Lake Pontchartrain in locations where they have not been seen in many decades. Most of the catches are accidental while pursuing other species, but kayak anglers are quickly learning to target catfish to expand their catches. 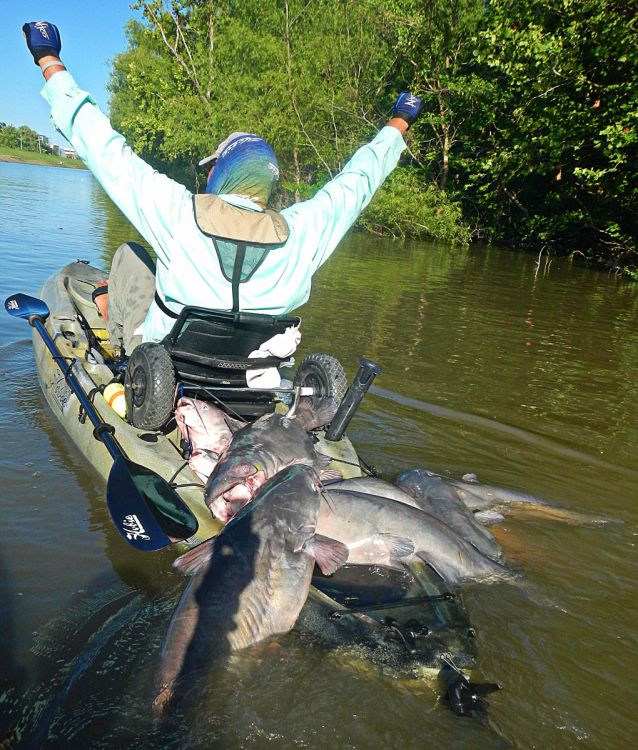 Catfish are primarily caught using live or dead baits, but many kayak anglers are reporting surprising catches of aggressive catfish hitting artificial lures like spinnerbaits and spoons. Once you know catfish are in a particular area, a few changes in techniques can put you on these tasty fighters.

Like any species, a match-the-hatch approach is best when deciding what baits to use. If you inadvertently catch a nice catfish, be sure to inspect its stomach contents when cleaning the fish.

Catfish in freshwater dine on shad, crawfish and other small baitfish. However, some areas of the Mississippi river near grain elevators you’ll find cats that have gorged themselves on spilled grain. While impossible to fish with grain, chumming nearby areas with dry dog food or sacks of soured grain helps attract cats to your fishing hole.

Catfish living in the brackish areas are often found with bellies full of shrimp, pogies and small crabs. All of these natural baits can be used to catch catfish. Often thought to be strictly bottom feeders, catfish are readily caught on suspended baits, so don’t rule out using a cork when fishing with a rod and reel.

Circle hooks work particularly well for fishing catfish. They are preferred on stationary lines where the fish hooks itself by taking the bait and trying to swim away. Firmly set as designed, a circle hook can easily hold a big cat that may be hooked and thrashing for several hours before the lines are checked.

Using a circle hook on a rod and reel does take a bit of getting used to. The instinct is always to set the hook when a bite is felt. However, this usually results in a missed fish. All that is necessary is to start reeling against the fish and the hook will slowly turn and set as designed — usually in the corner of the fish’s mouth. Sizes are not universal across different manufacturers, but 5/0 through 12/0 generally covers the range from small cats up to record setting brutes. Don’t overload the hook with bait and leave enough of a gap in the circle to ensure the hook can set as designed.

Kayaks are great for getting into areas where catfish prowl. Backwaters and areas with lots of flooded trees and stumps are generally good. Setting lines in such areas is easy with lots of natural places to tie off to.

No special gear is necessary to fish catfish from the kayak, but a small gaff usually works better than a net. In areas of heavy cover, it can be difficult to work a net without getting it hung up and big catfish require the use of a large net. The gaff can be easily stowed and quickly gets a catfish under control.

Catfishing is good sport and they make for great meals. Don’t overlook kayak catfishing as an adventure to add to your kayak fishing pursuits.

About Chris Holmes 236 Articles
Chris Holmes has kayak fished in the Gulf of Mexico, the Atlantic and Pacific oceans and many places in between.