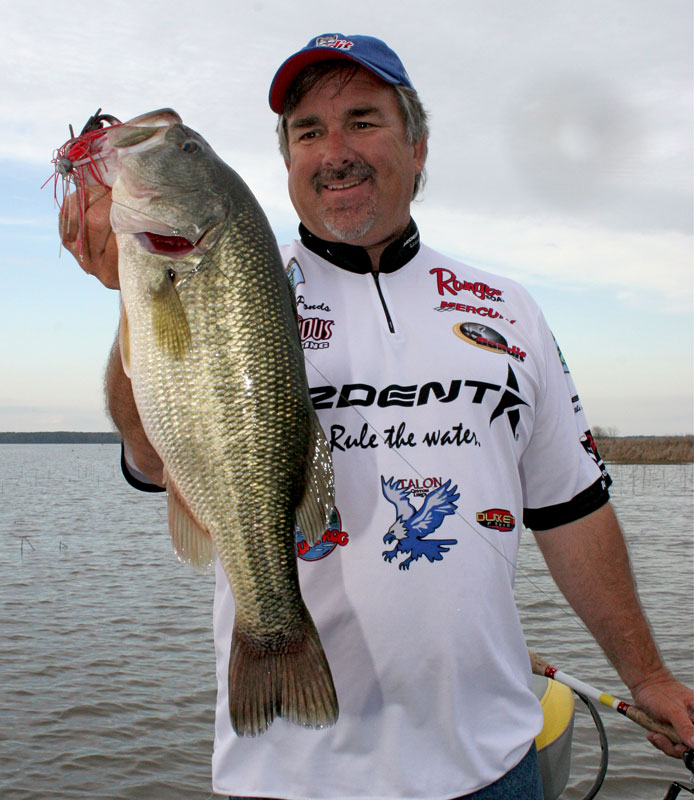 Swim jig is a perfect lure for bass when it seems like nothing else is working, and it doesn’t take a genius to tie one on and fish it effectively.

After patrolling the shallows in a popular prespawn area of Barnett Reservoir on a warm March morning, bass pro Pete Ponds of Madison had put dozens of small, buck bass in the boat with a swimming lizard and a buzzbait.

No lunkers were to be found.

“I think we’ve proven that the big sows haven’t moved up to the shallow beds yet, but the water temperature says they ought to be,” said Ponds, as he turned to look back at the deeper water. “It was 56 when we got here, and it’s 58 now, and 58 has always been the magic number for the females to start. I think we’ll try the edges of that old creek that runs back in here to this spawning flat.”

It was the right move.

Within 10 minutes, we got two timid strikes, Ponds on a buzzbait and me on a lizard. They fish didn’t take either one.

Ponds again made the correct call, bending down to the front deck of his boat and grabbing another white Duckett rod, this one armed with a silver and red prototype swim jig. He added a soft plastic crawfish trailer.

He launched the lure just past the spot where a bass had swirled on my spinnerbait just 30 seconds earlier and began a slow, steady retrieve out of the ditch up onto its edge, lined with pad stems.

“Whoa,” Ponds yelled as he bowed up hard against a fish. “This is a big one.”

The 4-pounder was swung quickly up in the boat.

I was already tying on a swim jig and adding a 4-inch, soft-plastic swimbait, trying to relocate the spot where Ponds had a swirl on his buzzbait. He pointed to the spot with his rod tip, and I launched.

The lure passed the spot, and I could see the water bulge just before there was a huge swirl and splash.

“I got him,” I hollered, quickly pulling in a 4-pound female fat with eggs.

My introduction to and instant infatuation with the swim jig continued throughout that morning. We put about a dozen sows in the boat over the next 2 hours that would have allowed us to easily cull the 3- and 4-pounders, had it been a tournament.

Less than a year from that day, Ponds and Talon Lures introduced the Pete Ponds Series Finesse Swimming Jig.

“There’s so many uses for the swim jig,” Ponds said later. “What you saw that day was just one. Those fish were on the move shallow to spawn but were timid. The other lures were spooking them. I don’t think the bass were swiping at the buzzbait as much as running from it. If you remember, they acted the same way with the spinnerbait you had been throwing.

“The swim jig is a little more subtle. It is basically the body of a spinnerbait or buzzbait, a lead, conical-shaped head with a hook and a skirt but without any blades. You add the trailer of your choice, just like you would either with a buzzbait or spinnerbait, and you cast and reel. It’s pretty much the same thing.”

Ponds said a swim jig is effective in several situations:

Ponds put a whopping on feeding largemouth with a white swim jig and pearl grub trailer.

“Reel it like fire to get in the middle of the frenzy, then pause and let it fall,” he said. “The smaller fish always seem to be up on top doing the work; the bigger fish are usually under them, picking off all the shad that are either injured or shaken up and sink below the frenzy.”

That same action was magical that fall when big striped bass were schooling on Barnett Reservoir. My lake-best of 13 pounds, 11 ounces came on a swim jig I let flutter down through a school.

Ponds is expert at skipping a bait under wooden structures and is adept with any lure. The swim jig is no exception.

“I can bounce that as far as or further than anything else and then start bringing it back,” he said. “There’s a lot of lures that will produce on that in the summer when the bass are hiding so far back under a dock, but a swim jig is really effective when the fish are finicky. It’s just subtle.”

Gene Bishop of Ridgeland, a 2016 Bassmasters Classic qualifier, loves that pattern on Eagle Lake, where boat houses and piers are the primary bass habitat in the summer and fall. Bishop, who regularly posts YouTube fishing shorts online, made a video on the pattern.

“You can take a swimbait and add it to a swimming jig and throw it up under those piers, and bass can’t stand it,” he said. “They see so many lures. You have to change up. The lure is also extremely structure-friendly. It’s weedless, and you can get in and around those pier pilings and cross beams where the fish are.”

Ponds likes a swim jig around vegetation where options are limited.

“You can swim it in, around and through pads, around thick grass mats, through sparse vegetation, and above heavy bottom vegetation,” he said. “A lot of lures can’t get through all those scenarios without grabbing greenery or slime that comes out with it, but the swim jig can and will. In the fall, when the shad start migrating out of the river into the backwaters, they stop and hang out on pad points. The pads are starting to thin out at the same time, and they open up just perfectly for the swim jig.”

Angler Ricky Johnson of Brandon uses a swim jig similarly in the pads on the main upriver and secondary points on Barnett from early March through May.

“Those points are staging areas for bass moving back into the backwaters for spawning, and again in the post-spawn period as they move back to deeper water,” he said. “I catch so many fish on those points with pad stems in late February and March, then turn and hit them again in the blooming pads in May. There’s always a swim jig with a 3-, 4- or 5-inch swimbait trailer on the front deck of my boat when I’m on the river in the spring. I just cast and reel, usually keeping the lure about a foot to two deep in the sparse pads. I absolutely love it in the scattered pads when the fish are in there.”

Ponds likes the swim jig along rocky banks both at Barnett and a subdivision lake near his home.

“What’s great about the lure in that situation is, once you establish the depth that fish are holding, whether it’s a foot or 18 inches, right on the rocks, or 5 or 6 feet or even 8 feet, you can reel the swim jig and trailer at that depth and keep it there,” he said. “You keep that sucker in the strike zone long enough, and it will make you happy.”

Swim jigs come in weights ranging from ¼- to 1/2-ounce, with 3/8-ounce providing the most versatility. The 1/4-ounce lure is usually reserved for sparse cover or shallow, grassy coves or bays where the lure must be kept above submerged vegetation. The 1/2-ounce lure is a great pick for the rip-rap scenario where you might want or need to fish deeper. The 3/8-ounce action is great for shallow structure and skipping situations.

Spinning gear is great for skipping, but a short rod is necessary. Otherwise, any medium-heavy action rod works fine.

A killer redfish bait, too

Capt. Tommy Sutton of Slidell, La., was introduced to swim jigs on a redfish trip in the Biloxi Marsh that needed a mid-morning rescue.

“I won’t ever leave the dock again without some of those in the boat; you can be darn sure of that,” he said.

Sutton was talking about a swim jig, a bass bait that has exploded on the scene over the past decade, that saved that day’s trip.

It had started with a perfect, rising tide that by 9 a.m. had turned into a dead tide. For those first 2 hours, Sutton, Dan Smith of Ridgeland and I stayed busy hammering slot and bull reds on spinnerbaits. Rarely did 10 minutes pass without one or more of us tied into a redfish. We boated at least 35 or 40, releasing all but the legal limit.

Then the tide stopped, and the bite did, too. We could see the reds in the clear water, but we couldn’t entice even a casual look-see at one of our offerings.

“That redfish right there just ran from my spinnerbait,” Sutton said, pointing with his rod tip as the fish swam past the trolling motor. Smith tossed a grub out in front of it, and the splash caused the fish to turn and race off in another direction.

“It’s about over y’all,” Sutton said. “We should have picked up some live bait. They’re running from everything else.”

Our options were limited. The shallow water was full of slimy moss that rendered grubs and spoons useless. As soon as one hit the water, it instantly transformed into a baseball-sized clump of green, with several inches trailing behind it in the water.

Desperate and looking through my gear, I came upon a bag filled with ¼-ounce swim jigs. I passed them around and we tied them on with 4-inch swimbaits for trailers.

“Throw them and fish them just like a spinnerbait but keep them up out of the slime,” I said. “This might reduce the spooking.”

We were stunned. Not all the fish reacted positively but most did. We went back to catching fish. The baits produced in many different scenarios, including points, shoals, broken grass, mossy shallow ponds and oyster beds.

The tide really started falling 2 hours later, and, as would be expected, the action hastened. All three of us stayed with the swim jigs.

Sutton took us to the outer edges of the marsh where the bayous met the open water, and we fished points. It was magical.

“Not many days that you spend more time reeling in fish than you do just casting and reeling, and we did that today,” Sutton said. “We were able to keep fishing through the dead tide, catching fish when usually you have to throw in the towel or switch to live bait.”