When Greg Hackney ties on a lure he believes will catch bass from late January to early March, based on years of experience, you can bet he’ll cinch the knot on a Strike King Thunder Cricket.

Without hesitation, Hackney said, “It is the best prespawn lure out there. Strike King’s is the best version out there. You can fish it in 6 inches of water or 6 feet of water. It’s really versatile.”

Hackney, a 46-year-old MLF Bass Pro Tour angler and the host of Sportsman TV, said the bladed jig is ultra-effective across Louisiana. At a time when the opportunity is great to catch large bass, a time when some big girls are spawning or thinking about spawning, the Strike King Thunder Cricket coaxes big bites, according to Hackney, who pointed out the correct soft-plastic trailer can help with achieve the depth he wants to fish.

“All I do is throw it and wind it. Throw the right weight and right color and throw it by cover,” he said. “I like a slow to medium retrieve when it’s cold. Fish are ripe for a moving bait. They aren’t locked onto cover. It’s a great bait for covering water.”

His presentations do vary. When the water’s warmer and it gets into grass, he rips it out. When the water is cold, he pulls it out of the grass. Otherwise, sometimes he’ll pump it on the retrieve, pull it with the rod tip and let it go down.

“It’s great on deep fish in dead-ends in the middle of the canal,” he said.

Depending on the water depth, he’ll cast a 3/8- or ½-ounce model, he said, adding the lure manufacturer is coming out with ¾- and 1-ounce models later this year.

The two soft-plastic trailers he uses with the bladed jig helps with the action desired, either slowing down or speeding up the vibration. His across-the-board favorite is a Strike King Perfect Plastic Blade Minnow, which, he said, shimmers behind the bladed jig.

As for the hookset, Hackney doesn’t pull the trigger right away when a bass mouths the Strike King Thunder Cricket.

“It’s better for the reaction time to be slower than faster,” he said.

One of Hackney’s favorite colors is white with a chartreuse trailer. He’s also partial to black/blue and green pumpkin. 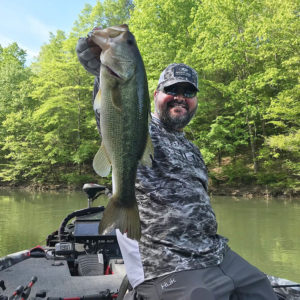 “I’m a big fan of colored blades rather than a shiny one,” he said, adding that if bass are feeding on shad or the water conditions are tough — stained to very stained — he’ll use a model with a silver blade.

There’s another feature that appeals to Hackney.

“One thing about the Thunder Cricket … the hook is longer,” he said, noting the 4/0 Owner Jungle Flipping Hook is at least ¼- to ½-inch longer than hooks on other bladed jigs.

Plus, he said, he can catch 20 or so bass on the hook and not dull the point.

He fishes a Thunder Chicken on either 20-pound monofilament or fluorocarbon. He rules out braid because it’s too fast.

“I’ve found that monofilament on a bladed jig is more user friendly” and results in more hookups, he said.

Hackney spools the line on a Lew’s BB1 Pro 6.6:1 reel seated on either a 6-foot-10 Lew’s Hack Attack spinnerbait rod or a 7-foot Lew’s Hack Attack all-purpose rod, both with medium-heavy action and a soft tip.