Extended periods of low water on the sprawling Sabine River reservoir have usually been followed by tremendous fishing for lunker bass. Will anglers’ focus on those huge fish during the 2020 prespawn and spawn be rewarded?

February is here, and that usually means it’s prespawn time for bass on Toledo Bend Reservoir on the Louisiana-Texas border.

The prespawn is chiefly defined as the beginning of the migration when bass move shallow, slowly, by first staging in deeper areas where submerged creek channels, ditches and sloughs meet the runways leading to the many coves and small lakes on both sides of the 185,000-acre reservoir on the Sabine River.

Darold Gleason of Many knows how to catch Toledo Bend’s big prespawn largemouths. Last Feb. 22-23, Gleason, a 37-year-old guide on Toledo Bend, won a BASS Central Open there with a two-day total of 10 bass that weighed 40 pounds, 2 ounces.

“Without a doubt, the final day was the best day of tournament fishing I experienced out there at the time,” Gleason said. “On that day alone, I brought 25 pounds, 3 ounces to …  the weigh-in.” 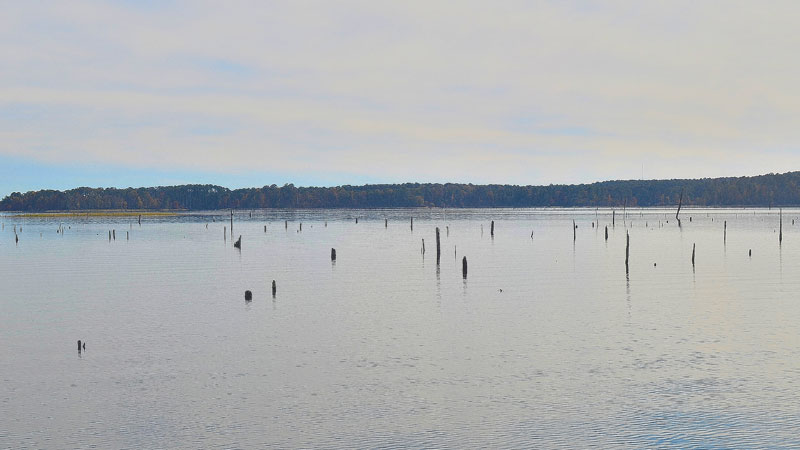 Gleason’s win was worth $42,800 in winnings and earned him a berth in the 2020 Bassmaster Classic next month on Alabama’s Lake Guntersville.

Gleason said that water temperatures at the lake weren’t terribly cold early in 2020, with 55 degrees in early January being the coldest water he found.

“We all know bass begin spawning in the low 50s … therefore, anglers may wish to schedule fishing around the full moon in February and even look to the shallows, especially if these warm water temperatures continue. We could experience an early spawn this year.”

Despite the continued woes expressed online by bass anglers about finding and catching Toledo Bend bass, Gleason’s 40 pounds over two days is nothing to snub your nose at. Neither was the five-fish limit weighing 25.21 pounds caught during the Keith’s Toledo Bend Tackle’s Battle on the Border fishing tournament last February.

The major complaint voiced by anglers catching fewer bass appears to be related to lower water levels the lake has experienced for the past 18 months during spillway repairs. For most of December 2019 and early January 2020, the lake level has remained at or near 165 feet, some 7 feet below normal-pool stage of 172 feet. Also, a lack of submerged vegetation continues and doesn’t appear to be going away anytime soon.

“The work on the spillway repairs is over, and pallets were being removed in early January,” said biologist Villis Dowden, who oversees Toledo Bend for the Louisiana Department of Wildlife and Fisheries. “All we are waiting on now are winter rains to begin filling the impoundment up to full-pool stage later in 2020.”

No doubt, many Louisiana and Texas anglers have been mesmerized by the many bass 10 pounds and better taken over the years at Toledo Bend. The numbers have been quite startling and were noted by Bassmaster magazine when it ranked Toledo Bend as the No. 1 lake nationally in 2015 and 2016.

From May 2018 to May 2019, 42 bass weighing between 10 and 14 pounds or better were recorded in the Toledo Bend Lunker Bass Program, conducted by the Toledo Bend Lake Association. The Association awards anglers free replicas of bass 10 pounds or more if they are brought to specific weigh stations and eventually released alive back into the lake.

In February, March and April 2019, 22 bass in that category were recorded, including a huge 14-pounder, the largest of the season, taken March 2 by DeQuincy’s Sean Kennon.

Patrick Bonin, former editor of Louisiana Sportsman wrote stories about 19 of those lunkers, including the general location where they were caught and the lures that fooled them. Although precise locations were difficult to pinpoint, the general areas remain important for anglers who want to land the bass of a lifetime. 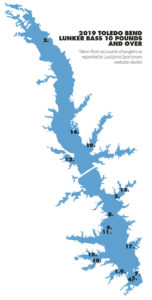 Will Toledo Bend ever again reach the level when 139 bass entered in the program during the 2015-16 season? That possibility depends on the success of periodic drawdowns. Dowden pointed out that increasing numbers of lunker bass taken over the years after periods of doubts or drawdowns.

“In the years following these low-water drawdowns, there were increases in lunker bass recorded in the Toledo Bend Lunker Bass Program,” Villis said.

“The 139 bass recorded by the program in 2015-16 occurred following the lowest-ever recorded lake levels in 2011, when about one-third of the lake’s bed was exposed — the lowest drawdown on record.”

“Periodic drawdowns are very important to lakes as they expose the lake bed to sunlight, enabling new growth to eventually be submerged and offer rich habitat for baitfish and bass.”

As for the health of the bass fishery at Toledo Bend, Dowden is very optimistic.

Dowden also said that gill-net samples have been great, with two bass netted that weighed more the current Louisiana state record of 15.97 pounds.

Dowden emphasized that the main purpose of stocking Florida-strain fingerlings is to affect the genetic pool of bass in Toledo Bend.

Gleason’s strategies for fishing the prespawn and spawn at Toledo Bend depends chiefly on where anglers decide to fish in February and March.

“Anglers tend to find shallower waters north of Pendleton Bridge during the prespawn and therefore will fish this area differently than the deeper waters south of the bridge,” he said.

“North of the bridge, anglers will be targeting waters 4 to 8 feet deep, and bass will react well to Rat-L-Traps in red and crawfish colors and slow-rolled spinnerbaits. Plastics used in the northern waters also include Texas-rigged lizards.”

On the southern end, anglers will find prespawn bass using submerged creek channels and ditches leading to shallower spawning waters in the coves, and successful depths include 12 and 18 feet of water. South of the bridge, Gleason will have a variety of lures tied on depending on how the bass react on any given day.

“What I used during the February tournament is a fine example of what I will continue to use during this prespawn,” he said.

When bass are on the shallow beds, Gleason uses a different strategy.

When he finds a bedded bass, Gleason will often use white lures, such as V&M’s J-Bug on a 4/0 flipping hook under a ¼- or 3/8-ounce tungsten sinker on braided line.

“Bedding bass are notoriously wary, and I may have to change up presentations a few times before getting the female to bite the lure,” he said. “Being patient with bedding bass is the key to catching them.”

Gleason has had the most success of any Toledo Bend angler when it comes to big bass over the past decade or so. He has caught seven bass at 10 pounds or better since 2007.