Cliff “Cajun Baby” Crochet of Pierre Part has plenty of them. One is about why he depends on a jig to catch bass in February.

Crochet was an avid fisherman in 2002, and the big team tournament circuit at the time was Doiron’s out of Stephensville. He was fresh out of the police academy, working for the sheriff, when his brother, Corey, asked him to fish a team tournament.

Crochet, 36, found some bass in the Spillway. The brothers caught all their bass on a jig and won the February event with better than 20 pounds. The bass that munched on the jig were either in hydrilla or on wood.

It was Crochet’s first tournament win.

Eleven years and one month later, Crochet used a similar one-two punch to win $10,000 in a Bassmaster Elite Series tournament on the Sabine River, his first-ever trip to the Texas River. He used the jig like a swim jig early in the day around cypress trees, then flipped isolated cover and caught his biggest bass, a 4-pounder

“I always have a jig tied on,” Crochet, who’s entering his second year on the MLF Bass Pro Tour, said. Counting B.A.S.S. events, it’s his 11th year as a bass pro.

Which brings us to February 2020. Wherever Crochet fishes this month, he’ll fish with a Crusher Lures Grass Assassin swim jig. More than likely, it will be a ½-ounce model, either black/blue or green pumpkin/orange, and he’ll swim it or flip it with the old one-two punch.

“When you combine the two techniques (flipping/punching/pitching or swimming), it seems you get more bites. I know there have been times I keep a jig in my hand all day,” he said.

Sure, other artificial lures, like Rogues, come into the limelight this time of year, especially in Louisiana. At the same time, when bass are cruising the shoreline, sometimes that hookset and the possibility of landing the bite can be iffy with treble hooks, especially on big bass. 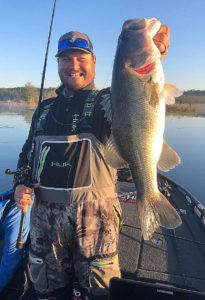 He loves to swim the jig, holding  the rod at about the 10 o’clock angle, swimming it and twitching it, reeling and twitching.

“Another thing I like about a jig in February, especially in the (Atchafalaya) Basin canals, is you get that sparse grass, barely sticking up, and just flipping it traditionally, flipping those little pieces of hydrilla. Look, if there’s 3 to 4 feet of water right on the edge, flip the bait right past the grass,” he said.

When flipping, punching or pitching, he said emphatically to watch the line or you’ll miss the bite most of the time.

‘Line watching is very important, because a lot of those bites, you won’t feel them,” he said. “It’s great when it bumps or jumps and the line swims up. … But when the line lays down and you’re not line watching, you pick it up and he’s spit it, or when you pick it up and it’s heavy, he’s got it … I swing. I flip to the bottom and 10-count. If it only sank to four, he’s got it.”

And a bass-on-a-bed’s bite is just as critical. If you miss, go right back to the fish with the jig. On the next hookset, don’t swing as hard, just short, sweet, crisp and hard, Crochet said.

Crochet said he doesn’t cut the weed guard but sometimes does flare it out. He also trims the skirt only if there are some long strands “to square it a little.”