If it’s September, it’s time for winding down, or better yet, cranking time with a Strike King KVD 1.5 squarebill crankbait.

Billy Billeaud of Lafayette loves to catch bass cranking. He retrieves the KVD 1.5 around any kind of structure, bouncing it off wood and such to get bit, especially when it counts in tournaments he fishes.

Billeaud has been fishing the KVD 1.5 the past several years and has plenty of bass to show for it, especially in and around Cajun Country — namely the Atchafalaya Basin and Henderson Lake — each September.

“It seems everybody in south Louisiana throws a creature bait,” in late summer, he said. The KVD 1.5 triggers reaction strikes from bass apparently turned off by so many soft plastics. 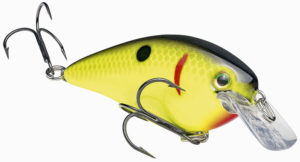 “I have so much confidence in the crankbait, especially in summer and fall,” he said. “When crankbaits fly by their noses, they can’t help themselves but just jump out and grab it, just latch onto it. I like the way it’s kind of erratic when you reel. It turns on its own, always kicks out trying to find center, takes off to the side every 3 feet or so and gets back on center.”

Billeaud, 59, who fished the old Bassmaster Invitational circuit starting in 1996, then fished a couple of Bassmaster Opens each year until 2015, when he began fishing the full schedule as well as FLW events — wants the square-bill in his hand this month.

Billeaud fishes the KVD 1.5 on 17-pound Seagaur fluorocarbon on a Daiwa Tatula reel with a 6.3:1 gear ratio. He said he found the perfect crankbait rod when he tried a 7-foot OCR medium-heavy rod made by Craig Olivier at Olivier Custom Rods in Lafayette. He was using his only one for a bladed jig, he said, but he liked it so much for cranking that he now has three.

He’s partial to the Daiwa reel because he burns the crankbait through the water, mostly targeting 2- to 4-foot depths.

“You can reel them really fast and slam them into stuff. They don’t tend to get stuck as much,” he said.

Billeaud makes one modification to the KVD 1.5, changing out the treble hooks and replacing them with Mustad KVD 2/0 Triple Grip trebles. Those deliver solid hookups, he said.

If he isn’t throwing a KVD 1.5, he’s chunking a balsa crankbait, particularly around cypress trees, he said.