Corey Harris stopped his truck at the top of his driveway in Chatham and pulled out his phone to check the weather Monday morning, Dec. 16. He figured he had three options based on how far away the approaching front was — go sit on the deer stand by his house, take his boat to Caney Lake and fish awhile or just go in the house and get in the bed. He had just worked off a 12-hour graveyard shift at Graphic Packaging.

Fortunately for him, he decided he had time to make the 10-minute run to Caney and get in a little bass fishing before the storms arrived.

Make that a little big bass fishing. He had only been at the lake a few minutes when he threw his 3/8-ounce green pumpkin jig out across a shallow hump and caught a 13.57-pound largemouth. It was the biggest fish of his lifetime. And the wake up call from the lunker made him forget he hadn’t been to sleep since the day before.

“It was just one of those ‘Wow’ moments for sure,” he said. “I thought that the fish would be biting with the pressure dropping and a storm front approaching. Fortunately I had a window to get in a little fishing before it arrived. What’s funny is, I had never fished this spot before. I found it earlier in the fall and when I was motoring nearby, I remembered it. It was a high spot right off the creek channel in one of my favorite areas of the lake.”

“I went over and made a few casts across it with no luck, then trolled across it to go to another spot,” he continued. “I just decided to turn around and cast back across it one more time and the bass nailed it. No telling how many times we leave a spot one cast too soon, is there?” 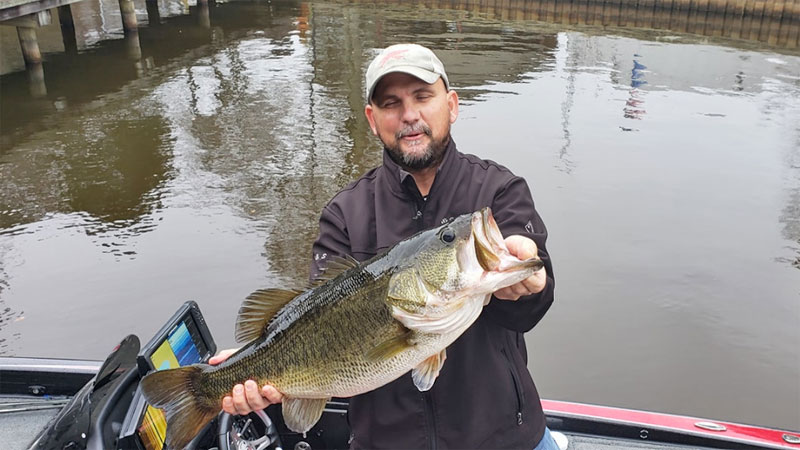 Corey has landed probably 20 bass between 10 and 11 pounds, but he knew this one was bigger. He started trying to figure out the best place to weigh it, but realized everything was closed on the lake this time of year on Monday. Then he remembered a fellow fisherman named Robert Albright who lives on the lake and puts on tournaments. He called him, met him and weighed the fish on his certified scales right on his boat dock. He then turned back to the lake and released the fish to be caught again another day. 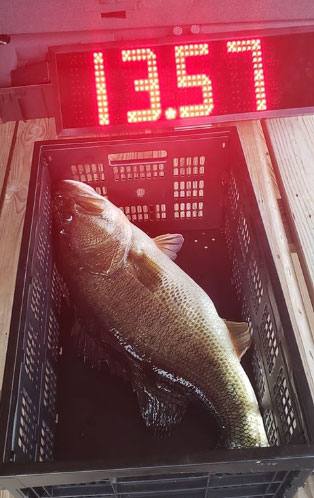 “I never hesitated to put the big fish back,” he said. “There is no reason to keep a fish that size. We got pictures and talked a minute and I headed back to the lake to fish a little bit more. But I didn’t care if I got another bite or not. For one of the few times I can remember fishing, I was totally satisfied.”

Harris planned on posting his catch on social media, but Robert beat him to it, posting on the Caney Lake Bass Club site. Within minutes, Harris’ phone was blowing up with phone calls and text messages.

“I hadn’t even gotten out of sight of the dock when people started blowing up my phone,” he said. “So I just decided to go back to the dock and come on home.”

And all this transpired before 8:30 a.m. It was the only bite he got for the morning. And another funny thing was, he didn’t see another single fisherman on the lake. Just one fisherman and one big giant largemouth bass.

Harris said Caney’s big bass bite has really been great this year and due to grass growing back in the lake, he sees it only getting better.

“Caney’s hard to beat for really big bass,” he said. “The last several trips I’ve made we caught fish over seven and eight pounds.”

Corey Harris is no novice when it comes to catching big bass on Caney Lake. Check out this story from last year when he and buddy Hunter Freeman caught a 36-pound stringer.