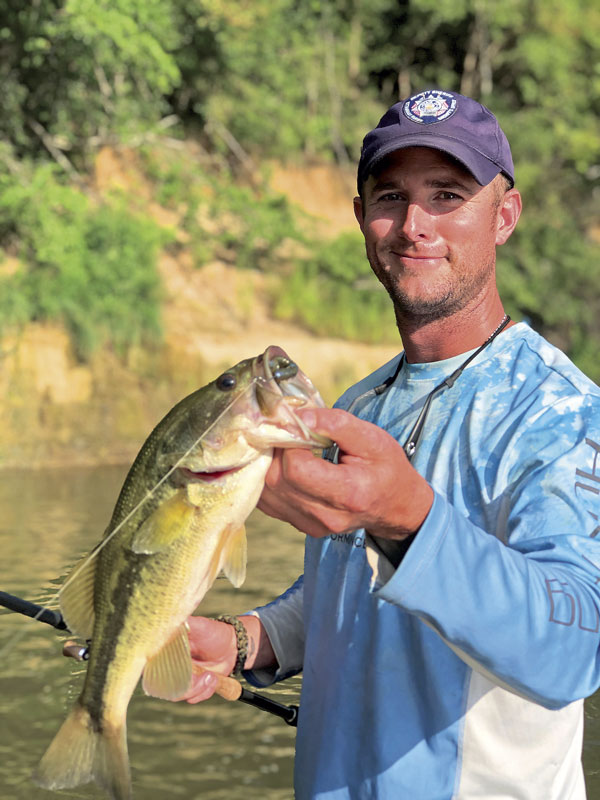 Barry Galloway uses the information he learned as a diver to help him catch bass.

With the advancement in electronics in the world of bass fishing, anglers are now learning more than ever about how bass behave underneath the water’s surface.

Barry Galloway of the small community of Enon in Washington Parish fishes the Bogue Chitto River and doesn’t have a single transducer under his boat. What he does have however, is something that most bass fisherman don’t — diving experience.

Galloway was raised in Franklinton and got his start fishing the Bogue Chitto River when he was a young boy.

His knowledge of the fast moving river grew with every trip that he made. At age 20, he started spearfishing the river and became very knowledgeable as to how the fish use structure as a current break. His subsurface training didn’t stop there however. When Galloway turned 24 he was given the opportunity to learn even more about the river when he was hired on with the Washington Parish Sheriff’s Department. Galloway was recruited to be part of the dive team and received training in swift water recovery on the Bogue Chitto. It was during the training that he learned the physics between moving water and structure.

The 36-year-old has since then fished the river hundreds of times and along with the knowledge learned from diving, he’s meshed together a strategy to regularly put plenty of bass in the boat. While finding the right spot to fish is important, maneuvering the river to get to your first spot can be a challenge.

Galloway fishes the section of the river from the Mississippi state line down to Isabel. Galloway said when operating a boat on the river it’s important to follow the bubbles.

That’s because the water that’s flowing in the deeper sections of the river is traveling the fastest. This results in more air mixing with water through a whirlpool affect caused by large logs and submerged stumps. Galloway uses a 15-foot flatboat with a 40 horsepower jet drive engine and said the jet drive engine is worth its weight in gold on the Bogue Chitto because of all of the underwater structure.

When choosing which spots to fish, Galloway looks for large objects that are located in the deeper sections of the river. Logs and root systems are the primary target when casting.

“When I was diving almost every big piece of structure that broke the current had a fish behind it,” he said. “I’ve spent so much time underwater that I can visualize where a fish is going to be by watching how the water is flowing around the wood.”

While structure is the number one target for Galloway, there is a section of the river that holds fish that’s a bit less obvious to anglers: ledges. Galloway said most of the steep ledges are located on outside bends in the river.

In as much as the Bogue Chitto is a unique river, it requires a unique setup. Galloway recommends fluorocarbon line and stays far away from braided line.

“There’s just not enough time to react when you get hung up with braid,” Galloway said. “A few years back there was a gentleman fishing the river and he got hung up on a limb. His line tightened up on him so fast he couldn’t pop the bail. There was so much tension on the line that when it popped back it struck him in the leg. Both the sliding weight and the hook was embedded in his leg and had to be surgically removed at the hospital.”

That’s not what anyone wants as the outcome of a day of fishing.

As far as what fishing pole he prefers, Galloway answered with a resounding, “No comment!” It seems the seasoned veteran has been through his fair share of broken rods due to overhanging limbs and debris.

“Sometimes all it takes is leaving my spinnerbait in the water while resting my pole on the bow and the current will pull it overboard,” he said.

When it comes to lures, there are two favorites of Galloway’s: Spinnerbaits and craws.

“When I’m covering a lot of water I like a spinnerbait because it allows me to cast fast and retrieve fast,” he said. “Most of my casts are behind structure and after a few turns of the handle when that bait gets 3-4 feet away from the wood, I’m reeling in quick to make another cast.”

Galloway really likes using a ¼-ounce white Humdinger. When throwing the spinnerbait he lets his boat float downriver while manning the trolling motor to avoid obstructions in the river.

While covering a lot of water is efficient, there are some spots in the river that demand more time to fish. Large bends in the river that create eddies with calm water is where Galloway ties on a Rage King Rage Craw in the Blue Crab color and starts flipping.

The Bogue Chitto has a healthy population of Kentucky bass, also known as spotted bass. Galloway said there’s a clear difference in where he catches these fish.

“The Kentucky’s tend to tolerate the current better where as the largemouth’s are always in the still water,” Galloway said. He catches more Kentucky’s in the river than largemouths by a 3-1 ratio and while the fish are smaller on average than largemouths, he prefers the fight that the fish give.

With years invested in diving and fishing the river, Galloway said it’s by far his favorite river to fish in Louisiana. And while he has a “sixth sense” due to his past history with the river, he said it’s never too late to start learning and recommends every bass fisherman give it a try.

“After you start putting the pieces together the rewards far outweigh the risk,” he said.

The Bogue Chitto River flows into Louisiana from Mississippi. The name of the river is derived from the old Choctaw language, meaning “big creek.”

In Louisiana, the river meanders through the Bogue Chitto State Park in Washington Parish, Louisiana. It closely parallels La. 25 and 16 for a considerable distance. Unimproved access to the river is available at several Louisiana Bridges, Highway 438 at Warnerton, Highway 38 at Clifton, Highway 16 at Franklinton, Highway 437 at Enon and Highway 21 in Sun (St. Tammany Parish).

The entire length of the river is part of Louisiana’s Natural and Scenic Rivers system. While it is a great place to fish, its beauty above the surface is often considered a hidden gem of the Louisiana outdoors.

Some areas of the southern end of the river are also popular for tubing in the summertime. The Bogue Chitto eventually flows into the Pearl River canal north of Bush.