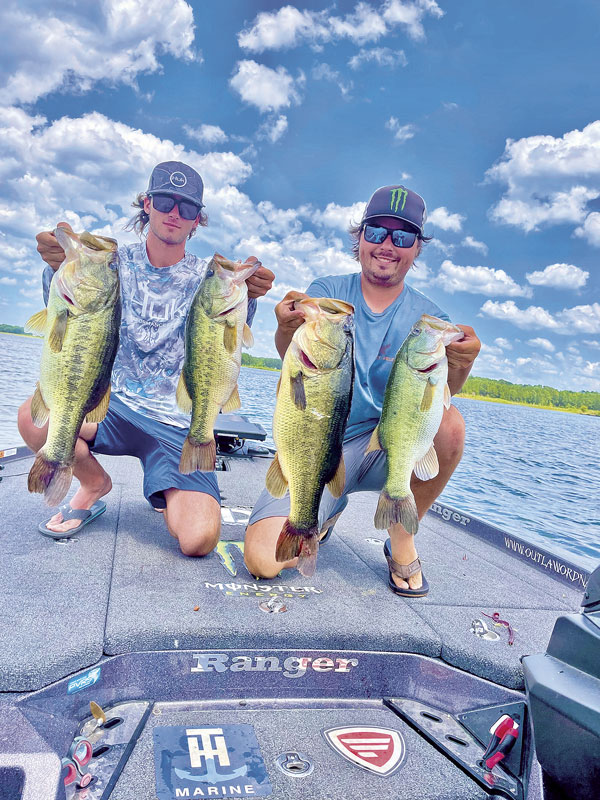 A guy cleaning out his attic contemplates going to his school reunion. A band considers whether or not to play a show in Idaho. And a company salesman just has to show up to close a deal. They all ask themselves, “Should I stay or should I go” in the iconic Choice Hotels TV ad that first aired in 1995. Remember it?

The right choice, according to the ad, is to go and get the right reward!

Believe it or not, the same thing applies to bass fishing.

Very seldom do fishermen pull up to a spot, or a stretch of bank, start casting and catch a limit of bass in one spot. And even if you are catching a few, your mind knows there’s a spot right up the lake where the big ones are probably biting and there are probably more fish. Perhaps you should run up there before somebody else hits the spot.

Should you stay or should you go?

Or perhaps you idled around a bend in an old creek bed and there on a little hump, there are a dozen or so fish showing on the screen of your electronics that you’re pretty sure are bass. You make a cast and catch one, then get another hit and miss the fish. Things slow down, but you still see the fish on the depth finder. The lake’s pretty crowded and you sure don’t want to leave and let somebody else get your spot. Besides, they might not be biting anywhere else. But, there is this spot just a couple hundred yards away that probably has more bass on it.

Should you stay or should you go?

It’s almost as important a decision, and sometimes more so, than what bait to throw or what technique to use.

Bass pro Tyler Stewart from Dubach, La., has seen just about every situation you can imagine. The young pro who fishes the Major League Fishing Tackle Warehouse Pro Circuit quite successfully knows the feeling.

“So for me, basically the most important thing is timing,” Stewart said. “You want to make sure you try and get the timing down to where you are on a good spot when the fish are feeding. What usually happens is that initially, in the first 10 minutes you start on a spot with fish, you are going to catch the best fish of the day. But after you beat up a school of bass for 10-20 minutes and they see your bait over and over, they figure out something just isn’t right.

“They’ll shut off and no matter what you do, you can’t buy a bite. If it’s a really good spot, the best thing you can do when they stop biting is give them 20-30 minutes to recover, maybe even go to another spot for an hour or longer. That way maybe you can come back and duplicate what you did when you first got there.”

Stewart admits that when you are in a tournament, or even just fishing for fun, it’s hard to leave those fish. But he personally has trouble and knows a lot of others that can’t just sit on a spot all day and expect them to react even if you do something different. And if you leave, there’s always the chance somebody else will pull up on the spot and sit on them till they bite or it gets dark.

In the pro fishing game, big bass are most important and when Stewart pulls up on an offshore hole, he always goes big to start.

“When I see a school of fish down there, or I come up to a spot that I know holds fish, I always throw a big fish bait in there first. A big crankbait, a big worm or a spoon — something to trigger a big fish bite,” he said. “Catch those big fish first if you can.”

He fishes a variety of makes and models of lures. For crankbaits, he likes shad color or chartreuse patterns and for worms he chooses Zoom or Googan in plum or green pumpkin colors 90 percent of the time. He likes to fish big flutter spoons in silver or gold. The reason for big baits is that big bass don’t want to chase down a lot of little bites when they are hungry. A big old gulp all at once keeps them from spending too much energy getting supper. And, frankly, it just gets their attention quicker.

If fishing is tough and you need to get one more bite or two out of a spot, he recommends taking off a few minutes to let the school rest and replenish, then going with more of a finesse approach like a shaky head or a drop shot.

Stewart keeps his lure selection pretty simple and that helps him focus more on technique, presentation and staying on fish. Those are the keys to catching them, he said.

And to answer the overall question, “Should I stay or should I go?” Stewart said there’s no textbook answer to that. You just have to go on your experience, and the more time you spend on the water, the more experience you have. You develop instincts and you have to trust them.

“I’ve learned a lot in the pro fishing game and one thing I can tell you is that there are some guys out there that are not only good fishermen, but they are so good when it comes to making decisions like where to fish or how long to stay there,” he said. “The guys that win or place a lot, it seems like they always make the right decisions when it counts the most. It isn’t luck.”

Stewart said there are always bass shallow and if you can figure them out, it’s a whole different ballgame. In that situation, it’s more of “blow and go.”

“Some people don’t think that is the case, but it’s been proven over and over in fun fishing and in tournaments. A good number of bass — and good bass — stay shallow or suspended right off shallow water pretty much all the time,” he said. “When you are bank fishing, there are two approaches as to whether you should stay or you should go.

“If I’m fishing shallow and catching fish in a certain depth of water or type of structure, I’ll just put the trolling motor down and cover as much bank as I can. I’m always looking for new water and don’t stop on an area just because I caught a fish. The other approach, again when things are tough, is to find a stretch of bank you know is productive and just go back and forth on it. If the fish slack off, you can try another lure and sometimes that helps. Again, every angler has to develop patterns that work for them.”

Tyler says one of the most remarkable things about bass fishing is that you can locate a good school of fish and fish it hard without a bite. You can leave, come back and the fish do the same thing again. But the third or fourth time you try, you might go from zero to catching 20-30 pounds.

“I don’t know how to explain it other than something has to trigger them to bite. It’s a reaction to the bait or it’s just time to eat,” he said.

This time of year, bass are generally schooling and chasing bait on most lakes. While most fish in schools are in the one-three pound range, Stewart said occasionally a six or seven pounder is lurking under the school and you can catch them. Even if big fish aren’t busting the surface and chasing shad, if there’s a lot of action going on and they are close by, they are triggered to bite.

“In a tournament, you aren’t going to get the kind of fish that you need to win by chasing schooling bass unless it’s something very rare,” he said. “But they are fun and I won’t turn up my nose on schooling fish. I’ll go mess with them. I can’t help it. But I won’t stick with them very long unless there are some real good ones biting in there.”

Whatever he is doing, Stewart said he always tries to learn something every day on the water. He suggests even weekend fishermen take the same approach. You can always learn something, he said. His goal is to go home every day as a better angler. Sometimes even when he knows the fish are biting on a certain lake or river, he’ll go somewhere else just to work on a certain technique and to make himself better.

There’s one “stay or go” answer that is easy. Should you go fishing? Yes. Always. If you get the chance, go.

Don’t just go when they are biting or when your buddy caught them. Go whenever you can, in different bodies of water and in different conditions. That’s how you learn to be a better bass angler.

Stewart has only been on the pro tour for a few years and he already has one major tournament victory under his belt and six top 10 finishes. He’s fished a total of 52 total major events and earned two national title appearances, including $170,000 – plus in cash winnings.

Joey Coco caught this incredible yellowedge grouper that weighed 42.6 pounds in the Mississippi Canyon off the coast of Venice. […]

After fighting a series of mishaps, Jared Serigné and his buddies put it all together and caught some bass on topwaters. […]