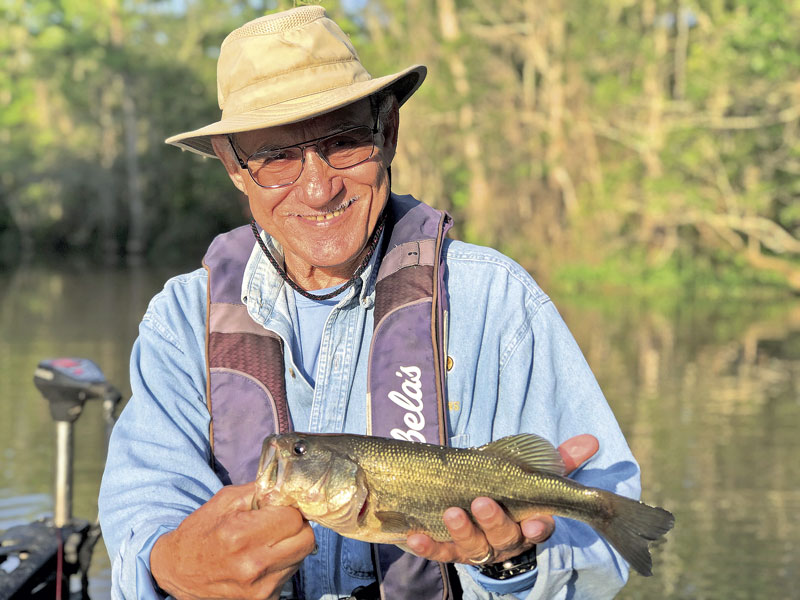 Find the right spots, and fishing off-color water can still be productive

It’s an all but universal deterrent to bass fishermen across the country. Here in Louisiana, muddy water takes on a life of it’s own because of our state’s rich soil-lined river banks and silty marshes. It seems fishermen are always on the lookout for a heavy downpour that can turn the water from gin clear to chocolate milk within hours.

Personally, I’ve spent half my years avoiding muddy water for the simple reason being that I thought the fish couldn’t see my lure.

That all changed when I was 23 years old in summer of 1996. It was on a fishing trip to the Rice Field Canal just off of the Tchefuncte River in Madisonville. The canal was a favorite of mine for catching bass, especially during the morning hours when bass were aggressive and chasing shad on the surface. Armed with a full arsenal of crankbaits, I backed down my flatboat into the main river and within minutes was turning into the canal ready for an exciting morning of catching bass.

My level of excitement took a considerable nosedive as I pulled into the canal, however. It seemed the water was falling considerably, which was a plus, but the chocolate milk coloration was going to make things tough. I threw down the trolling motor and started casting towards the shoreline while I scanned the waters surface in front of me for baitfish. After fishing for 30 minutes with no bites or sign of shad, I thought about turning around and heading back, but then decided to push further down the canal to see if the water would clear up.

I trolled the shoreline for another hour but the muddy water was a constant. I reached what the locals call the bulkhead; a simple wooden structure that spanned across the entrance to a large duck pond. I noticed water spilling through an open section of the bulkhead into the canal. Then, as if someone flipped a switch, there were a number of explosions on the water’s surface as shad skipped in every direction including up. This was quite a refreshing sight being that I had gone over two hours without seeing any surface action.

As I positioned the boat a little closer I cast into the swirling clean water pouring out from the duckpond into the muddy canal and immediately hooked up with a bass. As I frantically unhooked the fish from the treble hooks, I heard another set of explosions happening in unison. I tossed the bass in the ice chest and casted out into the same place and after three turns of my reel handle, I had another bass on! I finished off a limit of 10 within an hour and headed home with a cooler of bass, but more importantly my fear of fishing muddy water seemed to be quelled, at least for the time being.

As years passed, my hatred for muddy water evolved into a tolerance. I learned, after numerous trial-and-error trips, that the key to fishing muddy water was to locate clean water and target the mixing line. My understanding of this grew a little more after a bass fishing trip with a gentleman that fishes what is probably Louisiana’s muddiest river: the West Pearl River.

Originating in Bush and emptying into Lake Borgne, the West Pearl is a beast of a waterway. It collects runoff from numerous tributaries which results in a persistent flow. Joe Picone of Covington has been fishing the river for over 24 years and has learned to embrace the chocolate milk colored water that the river generously offers 12 months a year.

While fishing with Picone, he told me that the best thing about fishing muddy water is the consolidation of fish in one spot.

“When I fish murky water, I know if I can find a drain with clean water coming out, there’s a pretty good chance I can catch 12-15 bass off that drain. When I’m fishing clean water, they’re more spread out along the shoreline and not nearly as concentrated,” Picone said.

The 75-year-old also shared his thoughts on how bass relate to dirty water.

“Muddy water isn’t something that these fish run from — they just acclimate. I’ve looked at tagging studies showing bass don’t travel far distances like say a specked trout will. Bass are ‘homeboys’ and will typically stay in the same area for months at a time if the food is there.” he said.

As we picked up batches of fish at each drain the subject turned from catching fish to questioning what the scene looked like from beneath the surface. There definitely seemed to be some strategy on the side of the bass in the way they ambushed the baitfish.

Ambush beneath the surface

Upon arriving home the wheels in my head began to turn. Could it be done? I certainly had the camera equipment to film underwater so that wasn’t an issue.

The only problem would be finding the right spot to preemptively place the camera where this feeding phenomenon would happen. I decided on a local spot that I knew very well. It was a run-off drain that consistently spewed clean water into a relatively new lake. It was a man-made lake in my neighborhood that hadn’t quite cleared up from some work on a dam that was done about a year ago. I’ve encountered bass feeding along the mixing line routinely in this spot numerous times days after a hard rain.

My plan was to wait until the next downpour and set the camera up in the middle of the alley of clean water that spilled out of the cut.

Four days went by and that downpour came. Before the storm rolled in, I mounted the camera, an underwater motion sensor camera made by Trail-cam. Unfortunately, I placed the camera just off of where the clean water spilled out and was forced to relocate it the next morning. After making sure that it was set up near the mixing line, I left the camera for the day to see what it might capture. I returned back to retrieve the camera that afternoon and headed home to review the photos.

I loaded the SIM card into my laptop and scrolled through the files with the anticipation of capturing bass wreaking havoc. The first photo taken was a school of shiners swimming against the current in the clean water that was spilling out of the drain. The camera continued to snap pictures of the shiners as they settled in where the clean water flowed from the drain. After scrolling through a few, my attention transitioned from looking for bass, to trying to figure out what the shiners where doing. As they darted around in the clear water it looked to me like they were feeding on something; possibly small organisms or tiny bugs.

As I turned from photo to photo, my attention was focused on the shiners and then it happened! I was looking at a still shot of a shiner swimming by taken at 9:32:05 a.m. When I opened the next file the unassuming minnow was hit by a tank of a bass that looked to explode across the mixing line.

My camera takes pictures one second apart so within the span of three seconds the bass hit the minnow and was gone out of view. I sat in awe and after reviewing the sequence of photos what felt like 100 times. And while I only captured one bass on film, the information I’ve learned from observing the shiners was invaluable as far as fitting another piece into the puzzle that is the mixing line.

The Barnett HyperTac 420 crossbow packs a wollop in a compact package. It is one of the most portable hunting crossbows on the market. […]