Thane Aucoin saw what he had caught, but he barely believed his eyes.

The Luling man had been running a few crab traps off the wharf nearby his Morgan City home, with typical results. But what he found on the afternoon of Sept. 28 was anything but typical. He took a look at it and called his wife over.

“I just stared at it … ‘Hey, I just caught a blue crab,’” Aucoin said. “She says, ‘oh, ok,’ probably thinking it was just a blue claw or something. But then she sees it and goes, ‘Oh my goodness’ … it was a shocker. Neither of us have seen anything like that.”

Nor have all that many others. This crab was blue from shell to claws, front to back, and that’s a rarity, as the typical blue crab only has blue legs and a beige shell.

But a blue crab like Aucoin found, at least based on appearance, comes once in a blue moon. According to a 2018 report by the Virginia Institute of Marine Science (VIMS), two Virginia crabbers found one that year, and it was the first reported to the institute in 11 years.

There are also albino crabs and purple crabs in existence. Those colorations can be caused by a parasite that affects the crab’s muscles and shells. But a full blue crab is thought to be caused by a color variant and not an infection, according to VIMS professor Jeff Shields in the same report. Crabs have a trait allowing them to change color and fool predators.

One in a million? 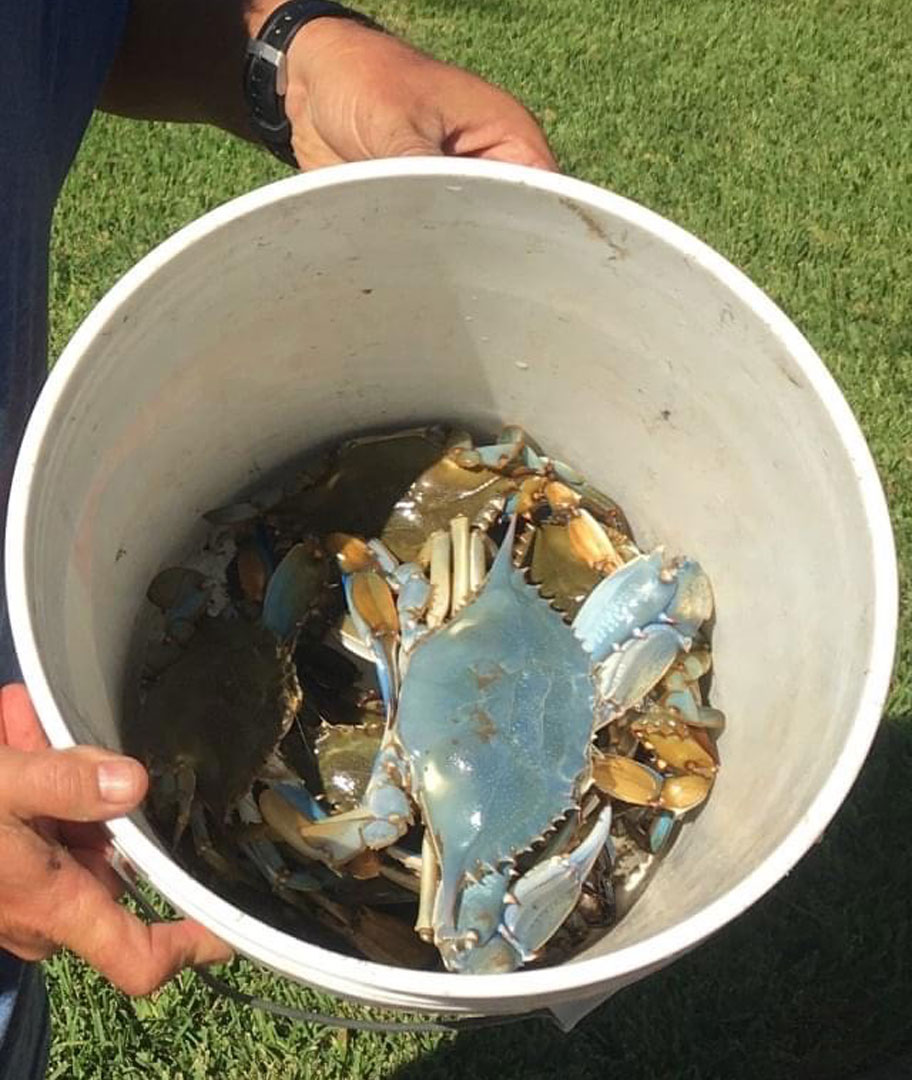 While different shades of blue yield different estimates on a crab’s comparative rarity – for example, a very bright, dark blue crab caught in North Carolina last year was called a “one in a billion” catch with a very rare genetic mutation – Aucoin’s catch certainly stands closer to the very few than the many.

“My sister googled it, and said it came back as “one in a million.” I don’t know if that’s the case, but I know it’s pretty rare,” Aucoin said. “I’m 59 years old and this is the first I’ve ever seen. There were a couple of crabs I’ve caught that we had pictures of, and you can see the clear differential between this and one of the green crabs. It was pretty exciting. I got lots of calls about it. It’s definitely exciting. It was just a regular crab trap we caught it in.

“We were both astounded. We kept it alive a day or two … I wasn’t sure if someone was going to contact me about it. I posted the picture on Facebook and got 198 shares. And I’m not a regular Facebook participant … it’s just one of those things where you’re right place, right time.”

Aucoin said he was having the crab mounted. It’s a milestone for a man who notes he’s crabbed throughout his entire life. Since he began setting the traps this year in July, the crop has been getting progressively better.

And, in this case, bluer.