Beau Johnson, a 46-year-old offshore petroleum employee, works so many days on; so many off. On Oct. 27, during his off-work period, he made good use of his time away from work when he had an encounter with a big 9-point buck he had been after.

“I belong to Goodson Creek hunting club in Sabine Parish; a club I joined before last season,” Johnson said. “This club practices good management for deer and there are some quality bucks on the club. In fact, I was able to take two good bucks last season.”

While hunting a year ago, Johnson found photos on his trail camera of a really good buck, one that was an 8-point, probably four years old and would score in the mid-140s. He actually had a chance at the buck a year ago. 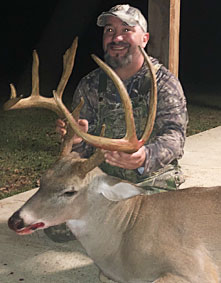 “I was on my stand one day when a friend invited me to join him for dinner, so I got down an hour earlier than I wanted to,” Johnson said. “As I was walking out, I jumped the big buck that likely would have come out by my stand had I remained there.”

This year, Johnson’s quest was to have an encounter with the big buck. He climbed aboard his two-man lean-to ladder stand around 4 p.m. on the afternoon of Oct. 27 and settled down for the evening hunt.

Sitting in his stand, Johnson has a view of thinned pines behind him, pines that connect with a clear cut with growth approximately chest high, an ideal area for deer, especially mature bucks, to feel safe. In front of his stand is a long food plot next to one of five fingers of a creek with adjacent ridges that bucks like to travel during the rut when they’re looking for receptive does.

“I was texting a buddy on another stand who said he was watching some deer out from his stand and told me to get ready because he predicted I would begin seeing some action around 6 p.m.,” Johnson said. “At 6:05, I texted him back kidding him that 6 p.m. had come and gone and I hadn’t seen my deer. At 6:06 I looked up and there he was with his nose to the ground coming my way.”

Getting over the nerves

The buck stepped into a clearing at 120 yards and Johnson identified him as the big buck he was after. Nervousness and excitement created some problems for him, however.

“I was so nervous that it took what seemed like five minutes to get the hammer on my .350 CVA Legend cocked and to get it on the shooting rail,” Johnson said. “The buck was still in the clearing so I finally got a bead on him, hit the trigger and he bolted and ran into the clear cut. I saw him topple over and knew he was down. I looked at my watch which read 6:07.

“I immediately went crazy and started texting everybody I knew telling them what I’d done. I gave the buck 15 minutes to be sure he was down before leaving my stand and heading toward where I had seen him fall. The brush in the clear cut is about head high and I’m only 5 feet 4 inches tall, so as I walked toward him I kept jumping up to see over the brush until I got to him,” Johnson laughed.

When he got to the downed buck, he said he shed a few tears, hit his knees and said a little prayer of thanks.

The buck, sporting 9 points with some stickers too small to measure, had an inside spread of 16 ½ inches with the main characteristic being the mass which measured at least 4 inches throughout the antler length. Main beams were over 24 inches each and the buck, estimated to be 5 ½ years old, weighed in at 220 pounds. The antler measurements revealed 156 4/8 inches of bone.

As a side note, Johnson’s 15-year-old son Tucker hunted a few days later on another stand and downed a 125-inch 8-point. Interestingly, Tucker shot his buck at 6:07 p.m., the exact time his dad had bagged his big buck.