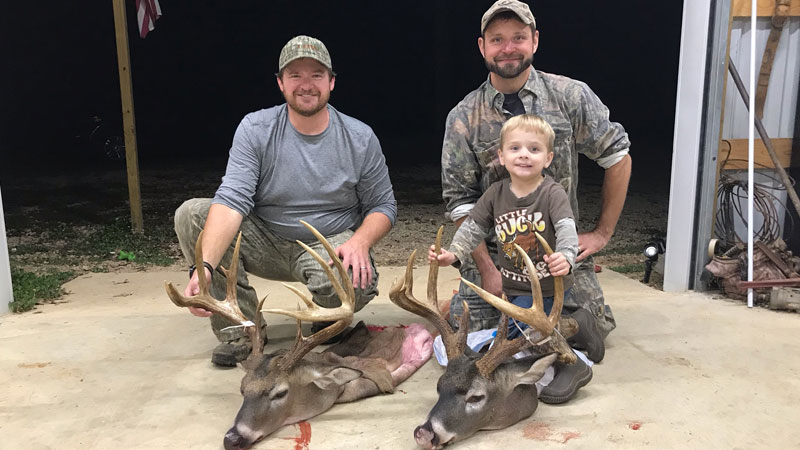 The Hooks and Horns hunting club in Jackson Parish covers 6,300 acres, so it’s no surprise that it’s home to lots of trophy bucks, but having two of them killed the same day was a big deal.

All in all, quite a day on the club land, which used to be part of the Jackson Bienville WMA before Weyerhaeuser Co. elected to divide the property and offer it to groups interested in forming hunting clubs. Kelpe and Wood were among the first to come aboard and form a club.

Kelpe, 35, climbed into his box stand early in the morning on Oct. 25 and settled down with what he called his “good luck charm,” his 4-year-old son, who took a seat in his dad’s lap. He was looking for one buck in particular.

“This nice buck we estimated to be a 3½-year-old deer was a good one last season,” Kelpe said. “We had several chances at him then but elected to give him another year. I’m glad we did because, he really improved between last season and this year.”

As it started to get daylight, Kelpe looked through the trees where he had a corn pile and saw a big-bodied deer at about 100 yards.

“As it started to get lighter, I could see better and realized it was the big one we had on camera,” he said. “I eased my son down on the floor, told him to cover his ears, put the scope on my .35 Whelan on his shoulder and shot.”

Kelpe called Wood, who came and helped recover the buck, which weighed 240 pounds and measured 145 5/8 inches. It featured 11 points with an inside spread of 15 3/8 inches.

That afternoon, Wood, 35, who has been Kelpe’s friend since the eighth grade, climbed into his box stand across the lease from where Kelpe downed his buck hours earlier.

“My stand sits in the middle of mature pines that have been designated a sanctuary for the endangered red cockaded woodpecker,” Wood said. “I had gotten word from Weyerhaeuser that they were going to come in and do some thinning in the protected woodpecker area. I had been getting photos of this big buck, but because of the thinning operation, I had not been able to trim shooting lanes or bush hog. Once Weyerhaeuser began their logging operation, there were no more photos of the buck, but soon after the operation was over, he started showing back up on my camera.”

Wood saw a couple of does and a small buck come to feed on the corn he had out. With the end of legal shooting hours approaching, he was worried that he wouldn’t get a chance at the buck.

“I looked at my phone and saw that legal shooting hours ended at 6:56,” he said. ”At 6:50, I looked up to see the 6-point (buck) my big buck had been running with step out. Right behind him was the big boy so I got my .35 Whelan on him, hit the trigger and heard him run off. I looked at my phone; it was 6:54, two minutes before legal shooting hours ended.

Kelpe returned the favor and came over to assist in the recovery of Wood’s buck; the deer went about 80 yards from where it was shot before dropping. The 5 ½-year-old buck sported 10 points with a 19 3/8-inch inside spread. It scored 157 6/8 inches.

About Glynn Harris 405 Articles
Glynn Harris is a long-time outdoor writer from Ruston. He writes weekly outdoor columns for several north Louisiana newspapers, has magazine credits in a number of state and national magazines and broadcasts four outdoor radio broadcasts each week. He has won more than 50 writing and broadcasting awards during his 47 year career.