A cold front was passing through Concordia Parish on the afternoon of Oct. 29, with winds that threatened to dislodge Ben Brallier, 35, from his climbing stand 20 feet up a tree. He hung on and when the big buck he had been getting photos of for the past three years stepped out, he was able to get the sights on his Horton Havoc crossbow on the deer’s vitals and squeeze off a shot that resulted in the downing of a magnificent buck.

Brallier formerly worked in the oil field, but because of the pandemic he was laid off. Currently, he works part-time for the Concordia Parish Sherriff’s office, which as a consolation gives him more time to deer hunt.

“I had been having this deer on camera for the past three seasons and this year I started getting trail cam photos of him in June and July,” Brallier said. “He had grown up a lot since last season.”

Deciding to hunt the afternoon of Oct. 29 in spite of a cold front that was passing through accompanied by significant winds, Brallier elected to mount his climbing stand some 20 feet above the area he felt the buck might show up.

“On one side of the stand was a palmetto thicket and small saplings,” he said. “To my left are two big tanks of a salt water disposal well. Straight out in front is an opening where I had placed a pile of corn.”

Up for the challenge

Climbing into his stand around 3 p.m., the winds were swaying the tree he had climbed back and forth and he wondered if this was such a good idea to be sitting 20 feet high under these conditions. Fortunately for him, he made the right decision.

“I had sat up there rocking and rolling for an hour when some does and yearlings stepped out of the thicket to begin feeding on the corn,” Brallier said. “They hung around for about an hour before they finally left.”

More than two hours passed with no more activity as he continued to fight the wind and waited until later when he felt he might have the best chance at seeing the big buck.

“At 6:15, two small bucks came to the corn,” he said. “Five minutes later, I looked up to see the big buck I was after step out of the woods and head for the corn pile.”

Brallier wasted no time in getting his sights on the buck’s vitals, squeezed off a shot that he felt was right on target. 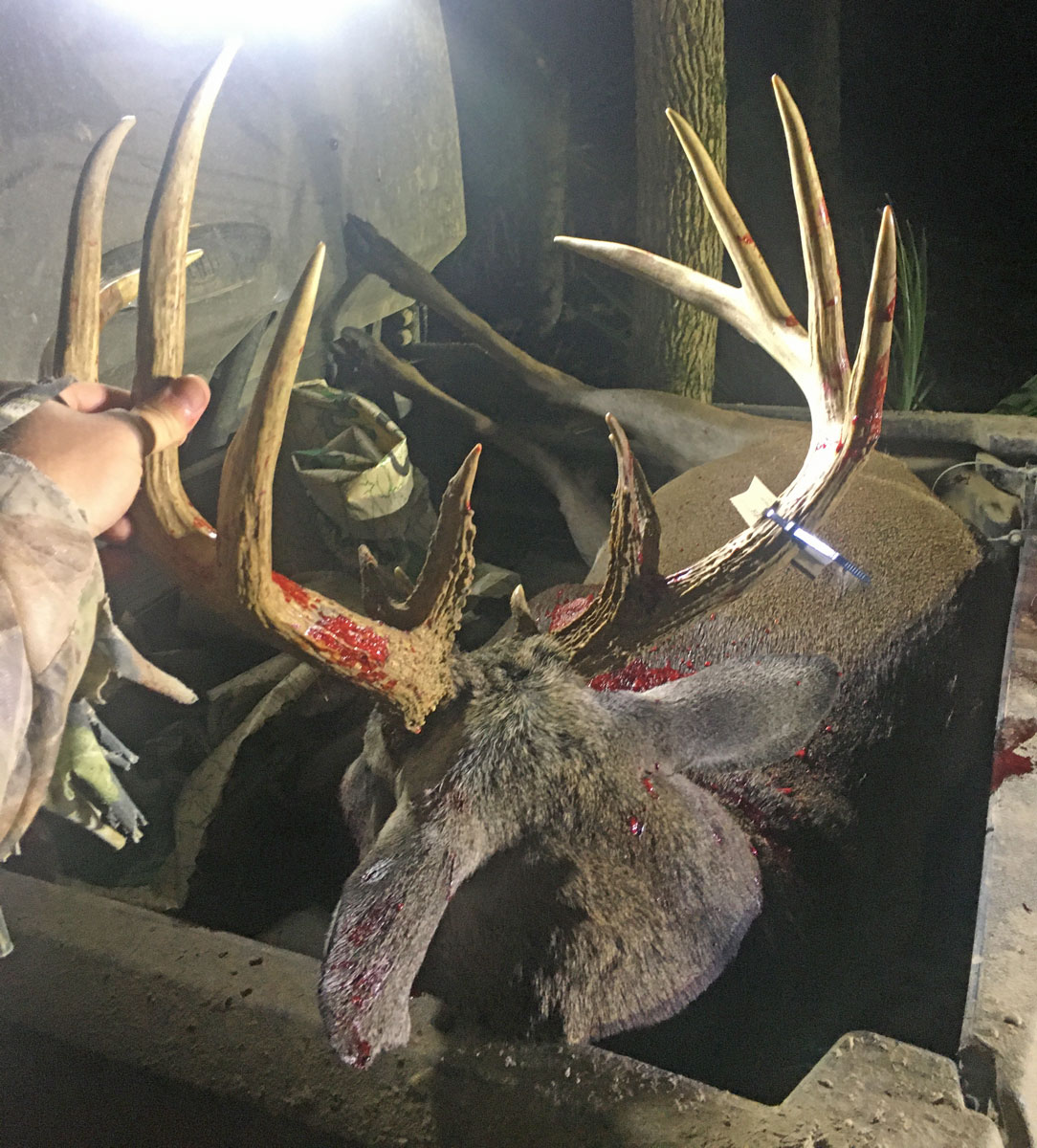 “The buck took off and when he ran between two saplings, his antlers hit the saplings and it sounded like a shotgun blast; I was afraid he might have broken one of his antlers off,” Brallier said. “He ran over next to the palmetto thicket, stood there with his tail flicking and I’m saying to myself, GO DOWN….GO DOWN! Finally he just fell over and I was relieved that I had finally gotten him. When I got down and went to where he lay, there was no ground shrinkage; there was ground growth.”

The buck was a genuine trophy tipping the scales at a whopping 265 pounds and was estimated to be 6 ½ years old. His rack was a main frame 10 with measurable stickers resulting in 14 points overall. Inside spread was just over 18 inches, main beams measured 26 inches each and bases were an astounding 6 and 5 ½ inches with measurements of four inches all the way out.

Taking the buck to Bastrop to enter it in Simmons Sporting Goods big buck contest, the rack scored a whopping 172 5/8 inches of antler mass.