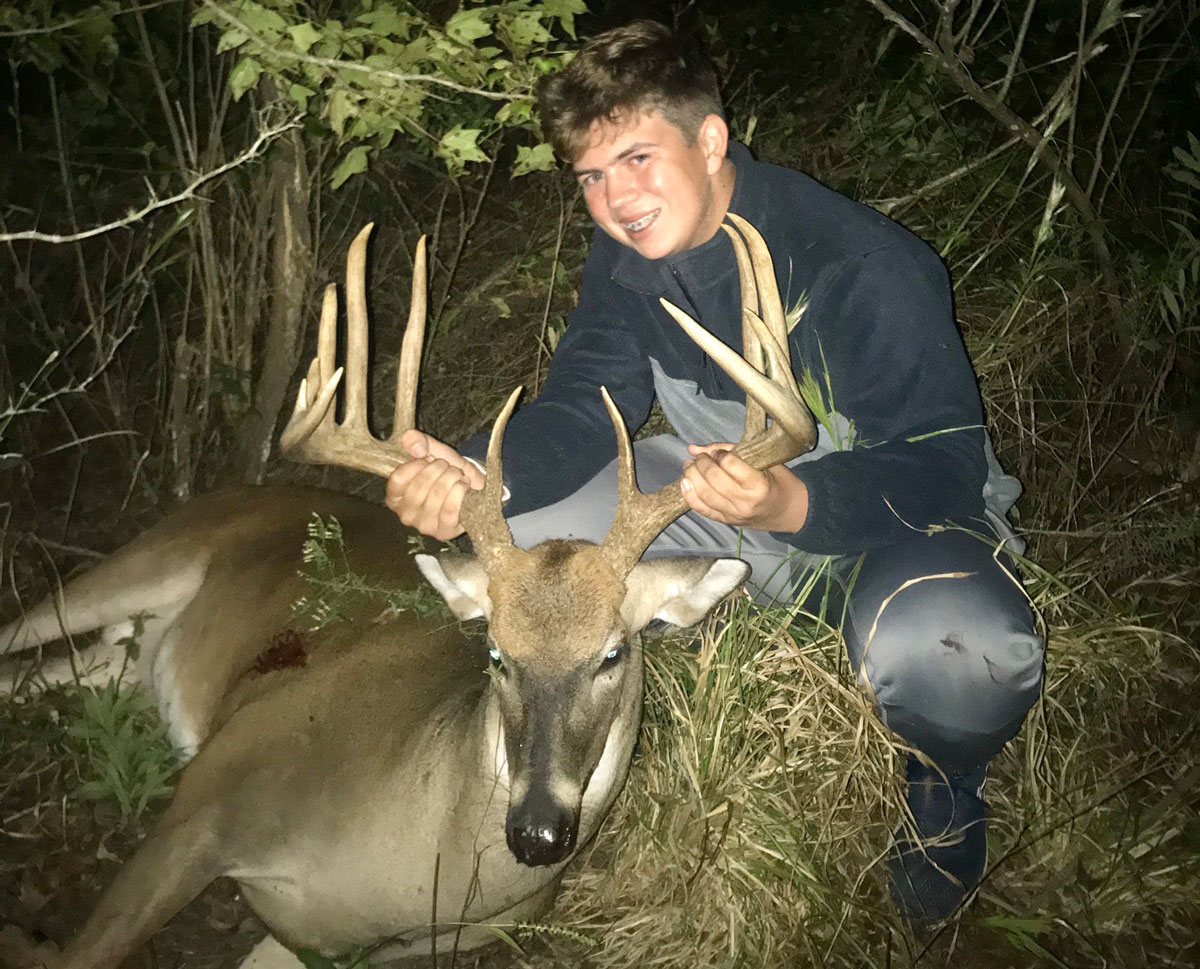 On Oct. 31, 14-year-old Daniel Chautin, a freshman student at Westminster Christian Academy in Opelousas, had a big decision to make. All his friends had plans to head out for a night of trick or treating. Daniel gave it some thought and decided to go sit in the deer blind with his dad instead.

“We put a camera out a couple of days before deer season and found images of a really nice buck on our farm,” said Daniel’s dad, Brady. “Daniel decided he’d rather go deer hunting than head out with friends to go trick or treating.”

The Chautin’s, who live in Arnaudville, own a 10,000 acre farm in St. Landry Parish where they grow rice and soy beans. The farm adjoins the Atchafalaya Basin levee.

“The part of the farm where we hunt is in a swampy area, a portion of the land that was not cleared for farming,” Brady said.

The father/son duo climbed aboard their box blind around 3:30 p.m., but as the afternoon waned, the temperature started declining and it became chilly.

“We have hunted this stand off and on all season but had never seen a deer, not the first one,” said Daniel, who was probably wondering about all the treats his buddies were hauling in while he sat in a chilly deer stand.

His luck was about to take a marked upward swing, far better than if he had gone trick or treating and found his bag overflowing with Reese’s Peanut Butter Cups and Three Musketeers. The first and only deer he had seen all season stepped out of the brush at 120 yards and began feeding on the Buck Forage oats planted in the food plot out front.

“When we first saw the buck, he was feeding on the oats but was facing away from us. I started getting so nervous and shaking I was afraid the deer could see me shaking from that far away,” Daniel said, laughing.

After feeding along some 30 yards, the buck finally turned broadside at 150 yards giving the nervous teen a chance to settle down and get the scope on the buck’s vitals. Daniel was shooting a Browning 7 mm mag and was finally able to calm his nerves enough to take the shot.

“When I shot, the buck jumped and took off into the thicket,” Daniel said. “We thought we heard him crash down but decided to give him some time to be sure he was down for good.”

After waiting 20 minutes, the pair left the stand and walked over to where the deer was standing when Daniel shot.

“We found a few drops of blood and started following the dim blood trail,” Daniel said. “I was afraid I had not made a good shot and he’d get away. However, we followed the trail up to where he was laying, a distance of only about 40 yards. When we got to him, he looked a lot bigger than I thought he was.”

The buck was estimated to be 4 ½ years old and weighed in at 196 pounds. His rack carried 13 points with inside spread of 18 inches. Bases were 4 ½ inches each with circumferences of 4 inches running the length of the rack. Main beams were 23 inches each.

Daniel and his dad took the rack to have it scored by Buckmaster scorer Greg Hicks, who put the tape on the antlers and came up with a score of 165 7/8 inches.

“Getting a buck like that,” Daniel said, “beats trick or treating any day.”

About Glynn Harris 405 Articles
Glynn Harris is a long-time outdoor writer from Ruston. He writes weekly outdoor columns for several north Louisiana newspapers, has magazine credits in a number of state and national magazines and broadcasts four outdoor radio broadcasts each week. He has won more than 50 writing and broadcasting awards during his 47 year career.