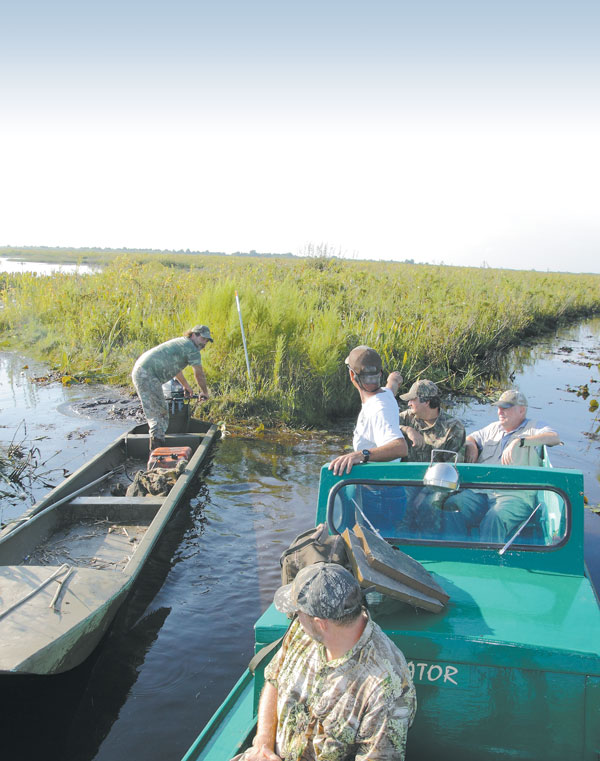 There are few guarantees in life, which in itself is somewhat of a gamble. But if I were to advise someone to bet on a sure thing, it would be to put in for the White Lake Wetlands Conservation Area Teal Season Lottery this month.

Though the drawing-out part of the lottery is taking a chance and no sure thing, beyond any doubt those who are fortunate enough to be selected are going to leave this hunt with a smile on their faces — and that’s guaranteed.

Looking for a few more guarantees? Let me add that the White Lake WCA teal hunt is the easiest, most comfortable and well-guided trip you’ll ever take a chance on.

My partner, Sloan McCloskey, who willingly accepted my invitation to put his name below mine on my lottery application, stood next to me in the predawn darkness waiting for legal shooting light. I had done my part. We were selected for the 2010 lottery teal hunt; now all that was needed were birds.

The word coming from the Dakotas in 2010 indicated Mother Nature had done her part too. There were plenty enough teal making the early flight in September to provide hunters with lots of opportunities to have great harvests. What’s more, according to breeding surveys, teal were 36 percent above the long-term average, and that equated to a liberal season length as well.

McCloskey cradled an unlit cigar between the crook of his thumb and index finger, supporting it with his middle finger. With it, he pointed to a direction from which he guessed the birds would come, and rhetorically asked our guide, Peter Breaux, what he thought.

I got the feeling what Breaux really was saying was it didn’t matter. White Lake is simply a duck mecca, and even on the slowest of days — bluebird with no wind — hunters are going to harvest teal during their hunts.

Seemingly, all three of us were enjoying the quiet as we reflectively looked toward the east, where slivers of orange and yellowish amber color kissed the edges of darkness.

I could make out teal decoys spread out in little bunches on three sides of the blind — nothing I hadn’t seen before. But I didn’t have to lift a finger to put them out, and that was something I was unaccustomed to when it came to waterfowl hunting.

Breaux had all of the preliminary stuff covered when we arrived. He even had the blind rigged with a courtesy lamp, much like a porch light, that really helped us see what we were doing as we passed guns and gear to each other. Neither McCloskey nor I had ever seen such a thing in the middle of the marsh.

Breaux solicited a few laughs from us, clearly having practiced his delivery numerous times before while helping hunters get situated in his blind.

“We’re like Motel 6 around here — we’ll leave the light on for you,” said Breaux, a retired rice farmer.

With legal-shooting time moments away, Breaux gave us the green light to load our guns. Years of familiarity with our firearms didn’t require any light for us to load. Simply by touch, the familiar size of shot shells slid into our gun’s actions as we looked out over the pond straining to see anything flying.

It was time! Suddenly they came, seemingly out of nowhere, followed by the sound of air lifting off of their wing feathers. The clamorous report of our shotguns chased the wings over the pond. Silence followed the echo as it drifted off in the distance.

From the blind, we counted only one bird lying on the water.

“Let me go pick up this bird while y’all reload,” Breaux said.

Located approximately 7 miles south of Gueydan in Vermilion Parish, White Lake WCA is in the heart of Southwest Louisiana duck and goose country. The 70,965-acre conservation area is utilized for both consumptive and non-consumptive activities including wildlife research. But it’s the stellar waterfowl hunting that comes to mind when most people hear the name White Lake.

“People love it – the ones who come,” said White Lake Manager Wayne Sweeney. “Everything is set up. You don’t have to worry about putting out decoys and setting up a blind. It’s all done for you. The guided hunts on the marsh are really easy too. And we try to make sure that everybody has a good quality hunt and leaves happy.”

One of the added attractions if selected to hunt White Lake is the opportunity to ride in vintage mud-boats built specifically for the conservation area when it was owned by Amoco. Built over 40 years ago, the boats are meticulously cared for, according to Sweeney.

“Going out in those antique mud-boats really makes the trip popular too,” he said. “A lot of people love that more than anything. There are two that were built in the early ’50s and two in the early ’70s. They go through them every year, because those old wooden boats will go down on you fast if you don’t So, there’s a lot of maintenance to be done on them in the off season.”

Sweeney has been associated with the White Lake WCA for 31 years, previously working for Amoco prior to the holdings being transferred to the state.

Separated by a generation, McCloskey and I both weren’t spring chickens, having paid our dues in the marshes of South Louisiana. My partner had a duck lease in his younger years in Buras, and I still hunt one in St. Mary Parish. However, White Lake, we both agreed, is nothing like what our diehard hunting is like back home.

In short, it’s hard to believe there really are hunting opportunities like this available to the general public.

The state goes to great lengths ensuring there is not only public opportunity to participate in a White Lake WCA hunt, but also the level of quality is the same for everyone.

“We have a good bunch of staff down there and a good foreman in Roger Cormier,” Sweeney said. “That’s our goal — to make everyone happy. Of course it helps when they are killing birds too. But it’s a good place for dads to bring their sons to make a hunt. We always like to see the kids come along with their parents. We get quite a few who do that. It’s great to get the younger generation involved and let them know what it’s all about.”

McCloskey and I watched birds that passed both close enough to shoot, too far to shoot and some that came from out of nowhere impossible to shoot. Though Breaux blew a teal call as good as anyone, it probably wasn’t necessary. Teal that were supposed to work the pond did and those that weren’t didn’t. Either way, there were plenty to see, and we shot those that were intended to be targets and marveled at the numbers that were going someplace else.

Teal fly early. Oftentimes if you haven’t put the allowable four birds per hunter on the water in that first half hour of shooting light, you have to wait them out the rest of the morning. Such was the case for my partner whose wingshooting was a little on the rusty side from not hunting in several years. However, by 8:30 he had redeemed himself, and we both had a White Lake limit of teal.

The marsh in White Lake WCA looks entirely different in early fall than it does in later months during the big duck season. Spatterdocks and fragrant water lily cover the pond’s edges and boat roads leading out to the blinds.

With teal flying so early and taking a limit too often the measurement of success, it’s easy to miss the abundant beauty the conservation area has to offer.

There is no doubt that taking a chance on the special teal season lottery hunt at White Lake WCA is a gamble. But if you’re selected to participate, there’s no doubt you’ll be more than satisfied and glad you did. That’s guaranteed.

The Duck Camp Dinners crew is back in the bayous as Chef Jean-Paul Bourgeois wraps up his last hunt of the season. […]

The Duck Camp Dinner crew heads west to the cajun prairies of Louisiana where specklebelly geese are king of the sky. […]

About John Flores 148 Articles
John Flores was enticed in 1984 to leave his western digs in New Mexico for the Sportsman’s Paradise by his wife Christine. Never looking back, the author spends much of his free time writing about and photographing the state’s natural resources.