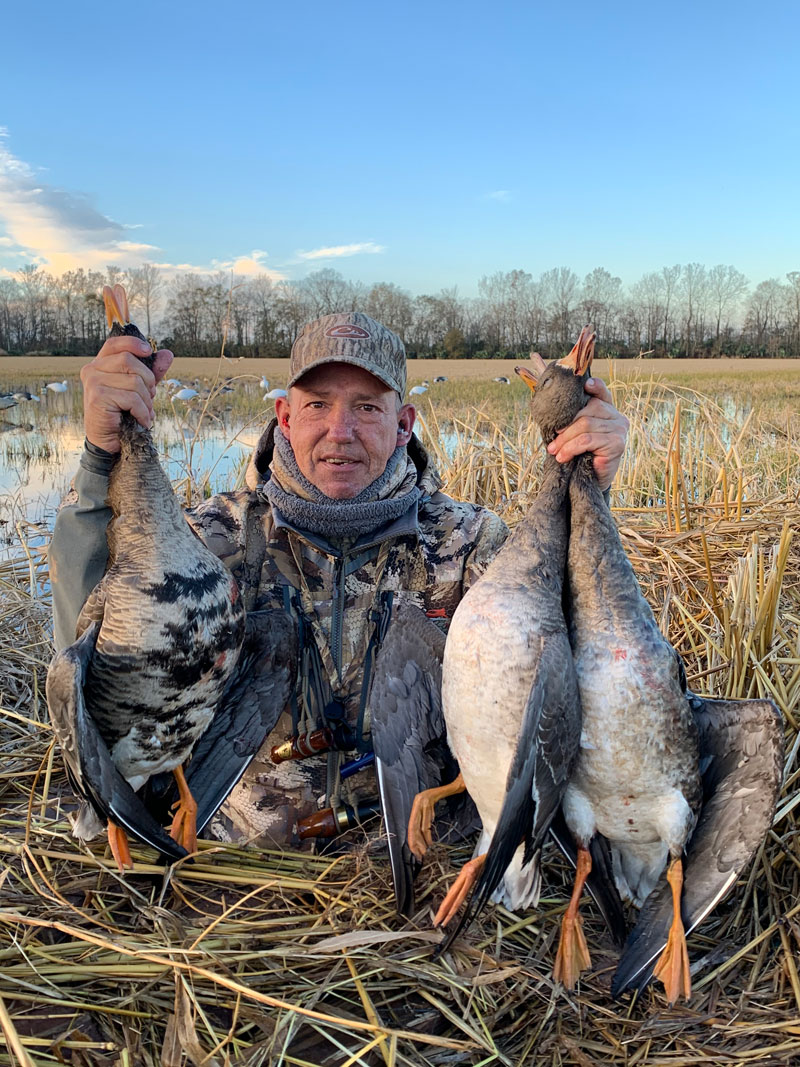 When duck numbers thin, specklebellies put hunters back in the action

The cries of airborne lulu chickens were barely audible above the howling wind as the few minutes to shooting time crept by one agonizing second at a time. Silhouettes of cupped wings went this way and that, in and out of our periphery as northerly gusts shifted their flights in almost kamikaze fashion. It looked to be one of those days where right place intersects right time, bringing hunters bliss only true fowl weather can deliver.

Indeed, ducks made their appearance as we’d hoped, though the action with them seemed to fizzle within the hour. Once our surroundings and beyond were well lit, it was apparent that there just didn’t seem to be much for ducks using the complex of farms surrounding us.

On this particular morning, though, the geese were active with raucous barks and growls filling the air. Snows and blues did what they do, seeming to know full well the effective range of modern shotguns and minding that distance without fail.

However, the white-fronted geese or “specklebellies” continue to show far more propensity for the caller, skilled and even less so, and were giving our modest spread a long look. And thankfully so, as hunters setting up shop at the last stop of the Mississippi Flyway have come to rely on these birds more and more for bulking straps when duck activity is scarce. And with tremendous value on the dinner table, coupled with the reward of picturesque approaches when the hunter is on his game, specklebelly goose popularity with hunters is higher than ever.

Haiden Richard with Southern Parish Outdoors has tried plenty of different approaches to ducks and geese over the years spent chasing these birds across the greater Gueydan area, as well as Arkansas. Though his calling prowess speaks for itself as the reigning world duck and speck calling champion, not to mention Louisiana’s current speck calling champion, Richard credits a key change in decoy philosophy to putting more geese on the strap lately.

“For years we hunted a lot of duck decoys with relatively few full body goose decoys, but we’ve changed over to mostly floater goose decoys lately,” Richard said. “With so much more crawfish water all around these days compared to the past, we’ve had to adapt to be successful.”

Indeed, as consumer demand for our native crustacean continues to grow, so does the acreage of managed water and rice stubble.

While at a glance this practice might seem friendly to visiting waterfowl, it’s really of minimal value to them, especially ducks, given it’s usually deeper than their preferred water depth and is under constant disturbance. Nonetheless, with the right decoy approach and effective calling, it can still be a productive habitat to hunt.

According to Richard, the decision to ditch most of the duck decoys in favor of more goose floater decoys has a number of advantages and has proven to produce geese while still being attractive to ducks.

“When the wind blows, we’re getting a lot more motion on those goose decoys floating rather than on stakes,” he said. “Most ducks will gladly work a spread of goose decoys, there’s really no reason to even have many duck decoys at all.”

To the contrary, it can often be difficult to get a goose to work a spread of mostly, if not solely, duck decoys.

“Those larger floaters really stand out from a distance, and we’re seeing great results with the specks,” Richard said, noting that wind is critical to getting motion in the floating spread. Without ample wind, floaters can really suffer with a lack of realism given no rippling in the water. As a result, hunters should prioritize any means possible of getting motion into the water when the wind won’t do it for you, be it jerk rigs or motorized decoys.

The author is also a recent convert to emphasizing floating goose decoy spreads after years of fighting overnight water level changes from a big rain when chasing ag land ducks and specks in Avoyelles Parish. This conversion came from a strategic change after observing a good wad of feeding specks in a crawfish pond late one morning driving in the area, as well as a matter of convenience.

Since properly anchored floating decoys will readily adapt to changes in water levels on their own, it makes for far less work on each hunt compared to tending full bodies. Too many mornings we’d show up at the blind only to waste precious pre-dawn time chasing down full body decoys that had blown off their stake from a big storm’s wind, or floated off their stake from a spike in water level.

Changing over to a mostly floating spread of geese gives our setup a new look for working geese while also being attractive to ducks, with unmatched visibility from a distance.

Beyond the decoy strategy, Richard notes how critical properly brushed blinds are to hunters looking to capitalize on specks if the duck flight is slow. His operation is constantly refreshing cover at their pit blinds to leave nothing to chance when specks come low and looking.

“You’ve got to double down on your cover, even add panels over the top,” Richard said, noting that ducks will often let hunters get away with poor cover, but specks leave much less room for error. That can’t be over-emphasized.

In general, hunters accustomed to chasing ducks that are interested in upping their specklebelly game need to mind the details. Scrutinizing decoy placement and quality, blind brushing, and calling combine with greater importance when it comes to getting geese in close.

Speck hunters are often quick to show off their call prowess in stacking what they claim to be mature birds sporting “barred up” chests, perceived to be the mark of old and wise birds.

Today’s social media hashtags that include derivatives of “tarbelly” account for thousands of posts, seemingly all in an attempt to depict one’s hunting expertise having fooled the old birds that earned their stripes from many a trip down the flyway.

But those who closely study the bird, though, might beg to differ with such an assertion. Research seems to indicate that a heavily blotched specklebelly is hardly a sure sign of maturity.

“We know they’re not like growth rings on a tree. It’s not incremental with age,” said Paul Link, LDWF’s Research Program Manager at the Rockefeller Refuge. “Picture comparison one year to the next on our collared birds can even reveal fewer bars appearing on the bird’s chest from the prior year.”

As part of his exhaustive research efforts involving banding, collars and transmitter systems, Link has handled thousands of specks and notes there really isn’t an easy way for most hunters to discern maturity on a harvested bird in hand.

“An older bird can just as easily be without bars entirely, though a young of the year speck will certainly be without any bars or patching on its first trip southward,” he said, noting that it’s not until its first molt on return to the breeding grounds that bars will begin to show.

Though the bars tend to get all the hunter attention, it’s in fact the bird’s mandible strap that is visible where the beak meets the head that gives the namesake “white-front” to the bird’s appearance. Link notes that sometimes that band of white can bleed further up on to the bird’s face in older birds, but even then is still not a definitive indicator of maturity.