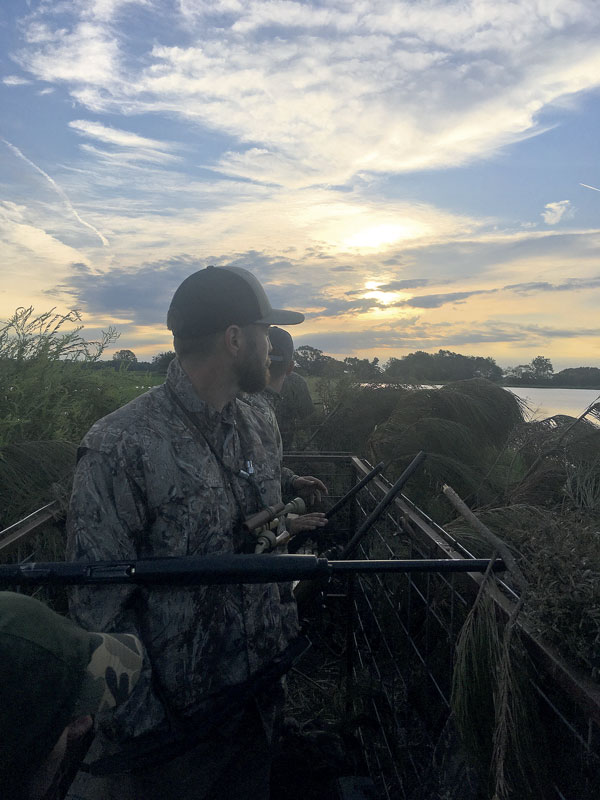 Falling duck numbers in Louisiana have hunters looking for ways to stop the decline or offset it.

It used to be so easy. Before the start of duck season, we would make a trip or two to our lease or favorite public-hunting area, get our blinds and equipment ready, then show up on opening day to enjoy great duck hunting.

Some years were better than others, and there was always a lot to complain about, but we always seemed to have plenty of ducks. Many of us took that for granted.

Things have changed for most Louisiana waterfowl hunters. Some legendary Louisiana duck-hunting areas may have few ducks, and almost all areas are not as productive as a few years ago. Even the sacred ritual of opening morning is only a shadow of what it once was.

Many casual duck hunters have left the sport and turned to fall fishing and deer hunting. But for the remnant of die-hard duck hunters who live and breathe waterfowling, that’s not an option. So, what do they do now? Some knowledgeable hunters from around Louisiana provided some answers.

An old Cajun once said, “You kant keel what ain’t dere.”

When ducks no longer show up in places where you hunt, you will not have much success. The trend over the past few years is clear: fewer ducks are wintering in Louisiana.

This was confirmed by Larry Reynolds, the former waterfowl program manager for the Louisiana Department of Wildlife and Fisheries, who provided information to help understand exactly what is happening in Louisiana with declining wintering waterfowl populations.

The information gathered through aerial surveys over the past few years indicates a significant downward trend in duck numbers, most notably in southeast Louisiana. Fewer ducks are coming to Louisiana, and some areas that have had good numbers for many years have hardly any ducks. According to Reynolds, some reasons for the decline include: changing weather patterns, agricultural practices, declining habitat and the proliferation of invasive aquatics plants.

Mike Benge, president of Delacroix Corp., one of the largest landholders in Plaquemines and St. Bernard parishes — which leases thousands of acres for duck hunting — can’t pinpoint a single thing.

“There is no simple answer,” he said. “Causes include migration issues, which have to do with changing global weather patterns, wet and dry cycles up and down the flyway and historical numbers of spillway openings. Our coast can simply not hold the number of waterfowl it once held.

“While feeding in the midwest has had some impact, I do not believe declining wintering duck numbers can be blamed on that. The most-important issue for us is our coastal habitat decline. I have not seen my lease-holders canceling their leases, but I have noticed that on certain days, the launch parking lot is filled and on other days, not so much. Waterfowlers are eternal optimists and will always hunt, no matter what the circumstances.”

The decline in duck numbers is complex, with many contributing factors, and trends don’t appear able to turn around quickly. Redistribution over Louisiana has also changed. Hunters in southeast Louisiana have been some of the most-affected. On the east bank of the Mississippi River, popular hotspots such as Caernarvon, Reggio, Delacroix and the Biloxi Marsh have experienced a significant dropoff in ducks over recent years. Areas around the mouth of the river have continued to be the top spots for ducks in southeast Louisiana, but they have not held nearly as many ducks as in past years. The west bank of the river has been in decline for many years due to habitat loss, and it continues to hold few ducks. Southwest Louisiana has fared better, but the number of wintering ducks remains below long-term historical averages.

To be successful, you must find ducks and hunt where they are. Moving to areas ducks were using was once as simple as moving across the pond or to another pond close by. Now, it might mean moving to another part of the parish, or the next parish over, or across the state, or even out of state.

Finding ducks will take effort, and you may have to reallocate your resources. Money spent on leases and duck boats could be redirected to pay hunts. It might even be time to try some public-land options. Remember those ponds on public land where you started duck hunting? It might be time to give them a try again. Being open-minded and creative will be the key for hunters who do not want to give up the sport.

If the skies are empty where you hunt, you’ll need to find new options. Now more than ever, the opportunity to network with other duck hunters exists via social media, hunting chat rooms and other online groups; they’re easy places to start. Try forming your own private duck-hunting network, starting with the people you know who hunt waterfowl. Ask them to add their contacts. Soon, you will have a large group of hunters networking, and you should get a good idea who is successful and the best places to find ducks. Hunters can then offer to swap duck hunts, inshore or offshore fishing trips, deer hunts and other outdoor pursuits. Here are some online places to start:

Many accomplished duck hunters cringe at the thought of paying someone to take them hunting. After all, they already know more about duck hunting than almost anyone else, right?

Even though guided hunts may never replace the sense of reward and accomplishment of doing it yourself, adding a few guided trips might add some excitement to the disappointment that many hunters have experienced in recent years. You may even learn a thing or two — but you don’t have to admit that to anyone. Trips to southwest Louisiana, to Arkansas and even Canada have made priceless memories for some hunting buddies.

Duck hunting in Louisiana will probably never be what it once was, but that doesn’t mean we still can’t enjoy it just as much. Success should not be judged by the number of ducks on straps, but by the satisfaction and enjoyment of pursuing the sport. Making memories with family and friends is what will be remembered and cherished. 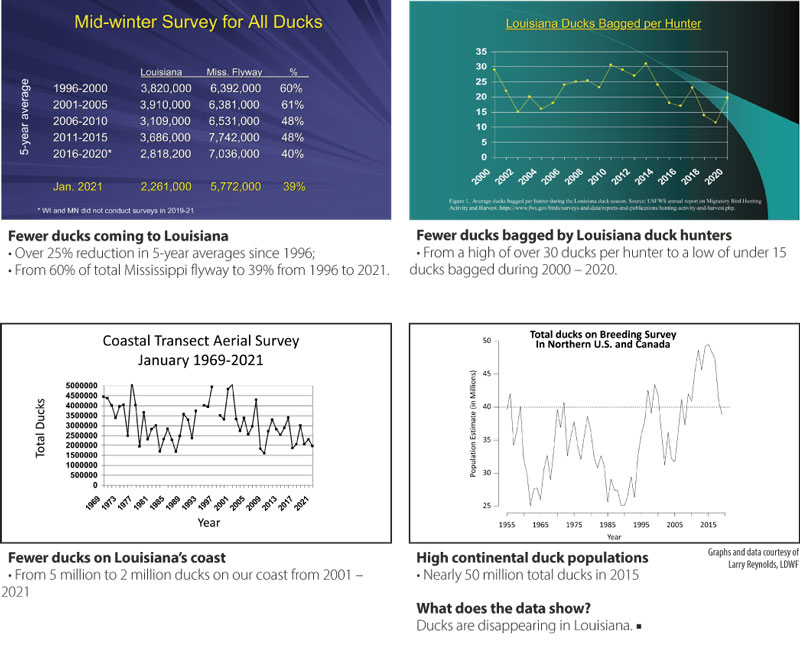 After a disappointing 2020-2021 season in the Caernarvon area, last January, I decided to go west. A fellow hunter recommended Spoonbill Adventures Guide Service in Welsh. The owner, Glardon Hoffpauir, extended an invitation on short notice, so I took him up on his offer.

Hoffpauir cautioned me that this had been a tough season by his standards, but the pintails and specklebellies were still playing in the waning days of the season. We set up in a pit blind overlooking a flooded rice field with a large spread of duck and goose decoys all around us. As legal shooting time arrived, clouds of geese rose into the brisk, late-January wind on their way to feed, a real spectacle. Plenty of ducks and geese were there to watch, and more than a few were interested in our setup, but things are tough in late season, so we had to work for the ducks taken.

“We have definitely seen a decrease in ducks this year and an overall downward trend over the last few years,” said Hoffpauir (337-368-5969). “We see very little migration on cold fronts; the ducks and geese come down and stay. They just move around and get more and more weary as the season wears on.

“We have plenty of fields to hunt, both flooded and dry, and the single most-important factor for birds is a south wind. The birds come in at night to feed in the fields and then head south before sunrise. On a north wind, they have already passed us by the time shooting time comes. When you have a south wind, it slows them up, and we see more birds on those mornings. Days with a south wind and bright sun are the best.”

Hoffpauir’s goal is “to have everyone leave happy. I think I have done that because they keep coming back, even when the hunting is slow. Even though the duck numbers are down, I still have hope.”

About Capt. Steve Himel 70 Articles
Capt. Steve Himel has hunted and fished in Southeast Louisiana for over 45 years. He operates Marshland Adventures, LLC and has been a freelance outdoor writer for the past 16 years. He is a member of the Louisiana Outdoor Writers Association.