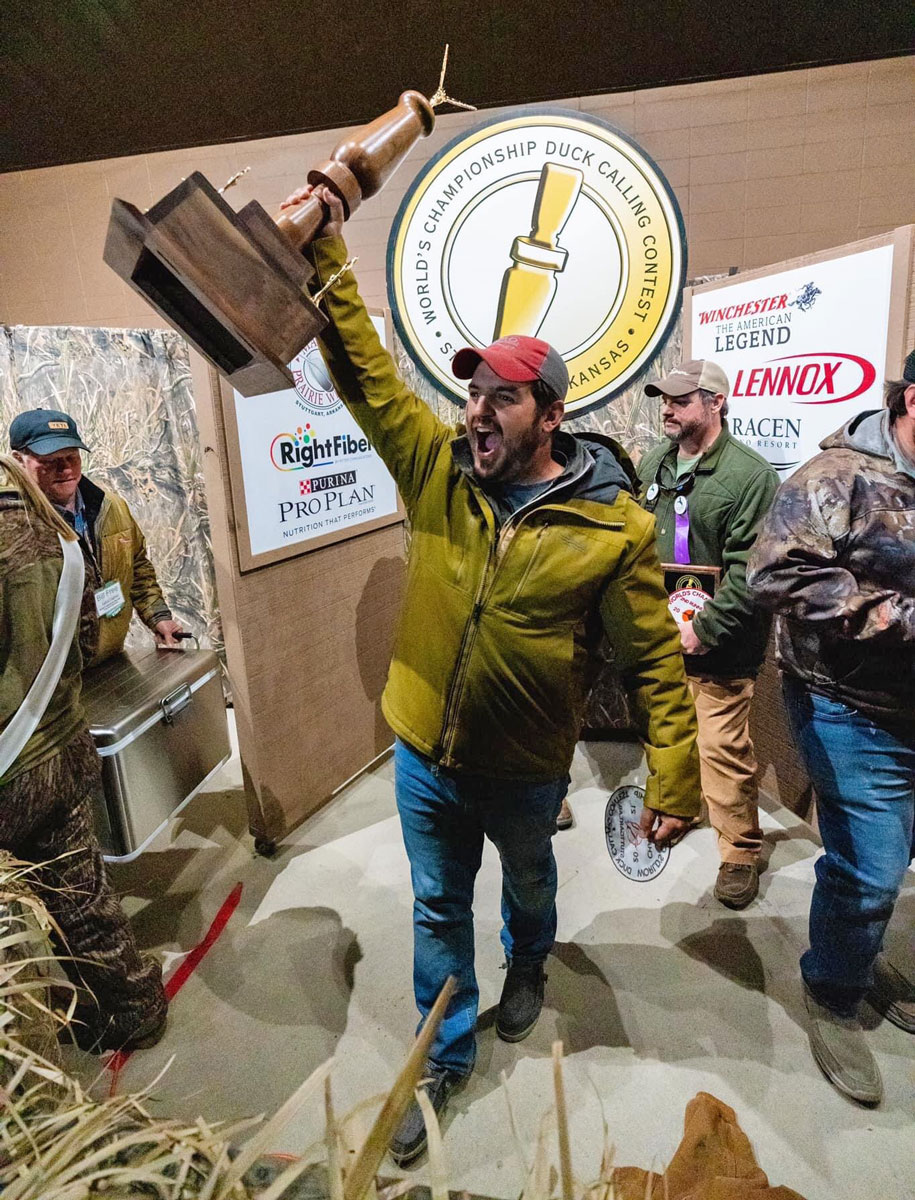 Erath outdoorsman Haiden Richard had a world championship at his beck and call on Nov. 27 in Stuttgart, Arkansas.

Richard’s Riceland Calls duck call, which was in his hands for three pressure-packed 90-second routines (and countless hours of practice the past decade or so) carried the day at the 86th annual World’s Championship Duck Calling Contest. The 31-year-old waterfowl hunting guide known more for his specklebelly goose hunting success became the first Louisiana resident since 1953 to win the coveted title in Stuttgart.

“I’ve been chasing this since I was 19, when I started trying to qualify,” Richard said. “I always wanted to win a world duck calling championship. I keep thinking about it. It’s crazy. It is.”

One of his two sons, Brooks Richard, 17, said about the same thing. He was happy and proud.

“He said, ‘Welp, that’s crazy.’ He knows how much I’ve been wanting this,” Richard said. There were tears, too, tears of relief, happiness and pride.

Brooks Richard, his younger brother, Charles Richard, 3, and Richard’s wife, Amy Morgan Richard, who is pregnant, were unable to make the trip because she was ill. Richard called his wife soon after the coveted trophy was handed to him.

“Ah, my dad. That’s probably the first time I’ve heard him cry on the phone,” his son said.

“You keep banging on the door and sooner or later you’re going to win it,” he said, proudly.

The 2021 Thanksgiving Week duck calling contest is the marquee event of the annual Wings Over the Prairie Festival. Louisiana’s Fred Parnell of Baton Rouge claimed it in 1953, blew his first 90-second routine at 3:30 p.m. as he drew No. 48 in the field of 56 qualifiers from across North America.

“The first round was good. There was one ‘duck’ I felt I didn’t hit as hard as I should have,” he said. He got out of the first round and joined 30 other qualifiers in the second round.

“You’re not going to win it in Round 1 but you can sure lose it in Round 1,” he said. In the second round, he said, “I didn’t hit the three-topper as hard as I wanted to or should have, but it wasn’t bad.”

Going into the third and decisive round and the field cut to 14, Richard was four points behind co-leaders Michael Steinmeyer of Jackson, Missouri, who won the title in 2019, and Jonathan Mortin of Beebe, Arkansas, although he had no way of knowing the judges’ respective scoring cards at the time. In fact, he said, he thought he was further behind than that.

He nailed it in his third routine.

“Everything was good, solid. I did what I wanted to,” Richard said.

Following an unbearable wait for the announcement of the 10th runner-up finisher on up, Richard’s name still hadn’t been called as of the fifth runner-up. He was pleased he made a good showing, his best in four years.

“When they called Jonathan’s name as first runner-up, I knew it was me. That is crazy. I didn’t think it would be me,” he said. Steinmeyer finished second runner-up.

He thanked his father for getting him started as a duck caller. He practiced often.

“My dad’s always been a big outdoors guy, fishing and hunting,” Richard said. “He’s very much attentive to detail. That’s what he’s good at, making everything perfect. That’s what it takes to win these things, right?”

Richard qualified for the championship by winning the Ducks Unlimited Regional Duck contest June 26 in Dallas.

One of the metrics of a great dog is the “blind retrieve.” There will be times when a hunting dog won’t see a bird fall. […]