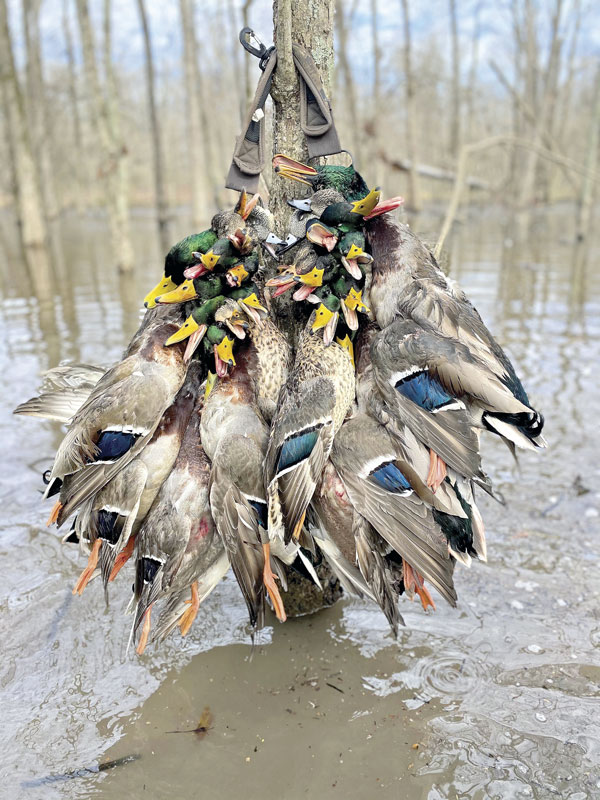 Hunting late season ducks is a whole new ballgame and there’s a lot to consider in adjusting your game plan, including duck love, to make sure you are in the right spot.

If you haven’t learned that, you probably wonder why other duck hunters are still killing ducks at the end of the season and you are not.

Finding and shooting late season ducks is all about location, location, location — the same key factor your local realtor will tell you is the most important thing about buying a house. Some duck hunters don’t have the luxury of going to other spots, but there are other things that you can do.

Late season ducks are picky about their real estate for a number of reasons. First of all they’ve come a long, long way in a relatively short time. Many of the ducks that migrate to Louisiana each fall and winter come from the prairie pothole region of Canada. That’s a trip of more than 3,000 miles. You have to think that they ask the question “are we there yet” more than your kids on summer vacation.

Along the way, they’ve encountered all kinds of weather conditions and threats from natural predators. They’ve been called, decoyed, shot at and harassed at almost every good looking spot they’ve stopped along the way.

And by January there is an even more serious reason for them to be a bit cantankerous. They are in love. Well, at least duck love. They have a chosen a mate and have become a couple. Experienced duck hunters and biologists will tell you that changes everything.

One reason that ducks, especially dabbling ducks like mallards and gadwalls, respond to calls differently and seek out different kinds of territory is that by this time of year, they have paired off. And that isn’t an easy relationship for the ducks to maintain, according to former LDWF Waterfowl Study Leader and avid duck hunter Larry Reynolds of Baton Rouge.

“It is important to note that ducks have chosen a mate by this time and there are several biological reasons,” he said. “First and most obvious, it’s for reproduction. There are a lot more males than females and just because ducks have chosen a mate doesn’t mean the others back off entirely. Take mallards for instance. A hen takes a mate to try and fend off all the other aggressive drakes. The drake often has to fight off other suitors constantly, but it saves the hen from having to do that. It allows her to rest, feed and start the pre-basic molt process and start getting nutrients after the breeding and southern migration season.”

Ducks also sometimes have to contend with losing that mate. Often the hen or drake is taken by a hunter, natural causes or a predator and the process has to start all over.

What does that have to do with successful duck hunting?

“It totally changes what ducks are looking for and how they act,” Reynolds said. “Early in the season, the ducks are new to the area and fairly easy to call and decoy. They are just glad to be here. They fly in bigger groups. Big spreads of decoys in open marshes or big reservoirs will attract ducks. But now that they are paired off, they are looking to get away from the crowd. They start looking for alternate habitats. The drake is much more leery of where they go. They have seen enough pit blinds in rice fields during their migration to last a lifetime. Duck hunters have to start keeping their eyes open and watch for what the ducks are doing. When they start heading to the smaller spots, you better head there, too. The one key above all others in duck hunting is that you better be duck hunting where the ducks want to be.”

Hunters begin to see large groups of ducks right out in the middle of big bodies of water, trying to get away from anything that can harm them. Or they stop seeing many ducks at all, which usually means either they have left the country or they are in smaller groups in smaller bodies of water. Reynolds said more times than hunters want to admit, that is the case.

“Late season ducks, especially mallards, love the little holes in the woods,” he said. “The ducks love the little WRP (Wetlands Reserve Program) lands that are set aside and flood. Old sloughs and river lakes, anywhere they can find to get away from hunters and bunches of other ducks makes them more comfortable.”

Work on that blind

Concealment and hiding movement also become much more important for hunters during the later parts of the duck season. It’s time to take your efforts to conceal yourself to a whole new level.

“We all get tired later in the season and we love to go to our blind on Jan. 20 and we know it needs some work, but we decide we’ve killed plenty of ducks there so it won’t make a difference,” Reynolds said. “We convince ourselves it will be fine and then we don’t kill any ducks and we blame it on something else. But it’s much more important to have your blind in good shape at the end of the season than it is early in the season.”

Reynolds points out that no matter where you hunt in the state, things outdoors look differently in January than they do in November.

“I don’t know about you, but where I hunt it turns from green to brown to kind of decayed looking as the season progresses,” he said. “And it starts changing colors from higher to lower levels. If you don’t match your blind to the natural conditions, you are not helping yourself.”

Cleaning up around the blind is a must. If you don’t think ducks can see 100 empty shell casings of all colors laying out in the shallow grass in front of your blind, maybe you picked the wrong sport, Reynolds said.

Decoy spreads definitely need to change late. Fewer decoys matches what ducks want. Many hunters change their spreads to relate to the ducks mating up, too. They’ll put a mallard drake and a mallard hen together all through the spread. But fewer decoys is a key to keep from discouraging ducks to come your way.

“I’m not a fantastic duck hunter, but I do know that those spinning wing decoys need to be in the closet by Christmas,” he said. “They are fantastic early, but late, they need to be gone or at least set far away from your spread so they can still at-tract ducks from long distances, but not scare them away from you when they get close.”

Setting up a small spread and hiding away from the blind in trees, the edge of a corn field or along the edge of a slough or flooded hardwood bottom is a great place to hunt. If you have to stay in the rice field blind, try setting up a big “fake” spread about 50-70 yards away from you, then scatter just a few decoys out right in front of you. They’ll come look at the fake spread, but then they’ll slide off and come to that small number of decoys more times than not. Ducks are in full plum-age by this time of year, so make sure you use big decoys or at least have yours clean and looking sharp.

Reynolds also said now is the time to back off on your calling. Ducks sometimes don’t need any prodding at all. At best, just hit the call a few times to get their attention, then let your decoys do the rest. That also helps restrict movement.

There is one time when all the extra effort the’s talking about may not be necessary, but it won’t hurt, either. If a massive slow moving cold front moves across the migration path and gets bunches of ducks on the move, they are not going to be as leery. They are just looking for a place to get ahead of the brutal weather.

“When we have a big cold front moving ducks down here in droves, all bets are off,” Reynolds said. “Anything goes. When new flight ducks come our way, that’s when you need to be out there. A big influx of new ducks is always a great thing.”

Even with a cold front, it doesn’t guarantee all the ducks will head further south. Sometimes they will just decide to sit it out where they are. And that led Reynolds and others to a disturbing discovery last year even here in Louisiana.

“When we had the deep freeze across the state in early February last year, a large number of ducks stayed here instead of heading further south,” he said “It got down to zero in north Louisiana and as low as 20 down in Baton Rouge. We had a lot of birds with GPS collars on that died. When we tracked them and went out to pick them up, we found literally hundreds of dead ducks and geese that had also perished due to the freeze. Banking on late movement of birds based on a storm is not a successful strategy for duck hunters in Louisiana in my opinion.”

And one thing Reynolds said to do is never mess with success. If what you are doing is working, don’t quit doing it. If it isn’t working, change tactics. That’s simple, but effective.