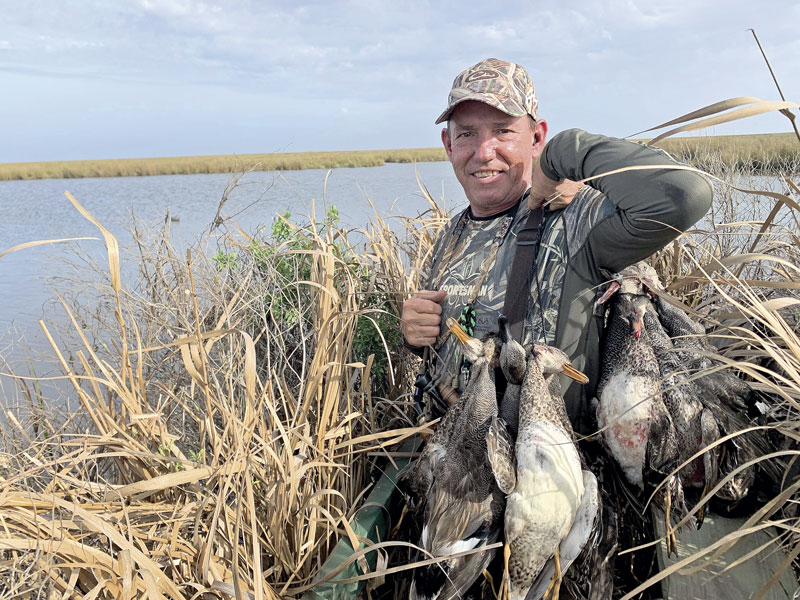 For as long as hunters have been chasing the annual waterfowl migration in our coastal marshes, they’ve been dealing with nearly annual frustrations that come along with the territory.

As a coastal hunter, you’ve not really earned your stripes until showing up to brush a favorite blind only to find that a summer storm hauled it off to who knows where.

However, a bit more forethought can go a long way in adding resilience to your next marsh blind to prevent a rebuild year after year. As a consulting engineer and passionate waterfowl hunter with deep roots in our coastal marshes, my two worlds collide when it comes to building duck blinds. That’s not to say that it’s been without failure, but I hope a few tips here may save fellow hunters along the coast some time, money and headache.

For the securing duties, I opt for 3 – 3½-inch screws, preferably deck style screws with the star drive tops. Such screws are designed for service in harsh environments and the star drive makes working in difficult areas easier with less stripping from the drill. Using quality screws also affords a measure of portability in that they usually can be disassembled should the location go cold in favor of a new build elsewhere.

Even when securely constructed, however, it’s the design that often makes the difference in a blind riding out the next storm or being a casualty of that storm. Solid paneling for walls is a recipe for catching as much wind and/or moving water as possible, thus putting the whole structure at risk. Instead, take a page from modern flood resistant buildings and include flow-through capabilities, be it wind or tidal surge.

We all prefer some semblance of a wall to offer respite from winds during the season, but that can be achieved with heavy brushing just the same. Intermixing broad leafed vegetation like palmettos within the “walls” can achieve wind blocking for those big northern blows without the use of solid wooden paneling.

With all of the above in mind, what I’ve found to be the most common cause for blind loss has been failing to properly negate the force of lumber’s natural buoyancy on well-assembled structures during storm surges. It’s not that what was built wasn’t strong enough, in fact it was built so strong that it literally acted as a raft and floated away as a single piece when surge waters got high enough.

Our coast is in fact littered with fully assembled blinds having drifted off to points unknown, still fully intact. As a result, just as much attention to detail is warranted for what goes into the ground as what is seen above it.

Sufficiently staking the whole assembly down is critical in preventing the mentioned rafting effect, but simply going straight down a foot or two may not always be enough. Instead, plan for at least three to four feet or more of in-ground staking, depending on the stability of the ground. Not all of our marshes are alike, be it salt marshes of Hopedale to the flotant of Cameron. Adapting efficiently to those unique conditions is critical. 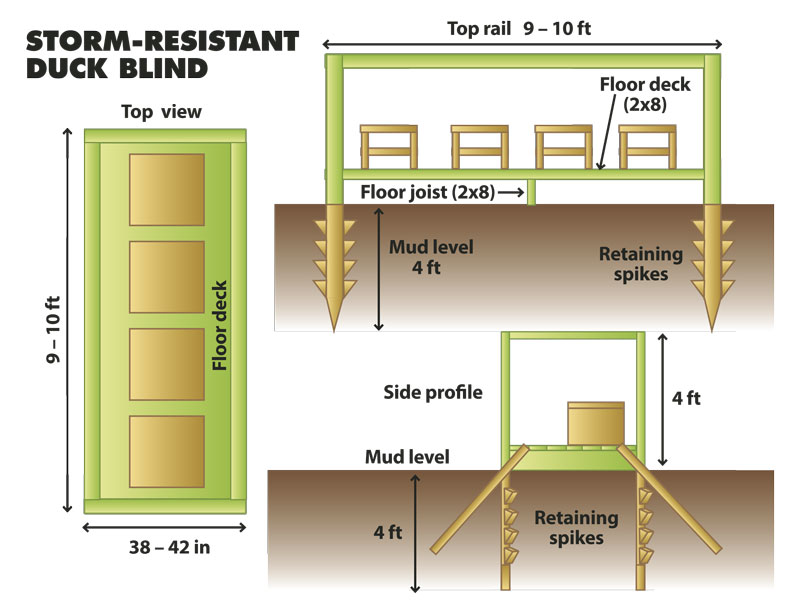 In general, any measures enacted to resist a stake in coming back out the same way it went down will help the cause. Our recent builds feature staking that not only goes deep into the ground, but preferably staking at angles on either side of the structure. The angles provide additional resistance to the vertical lift of buoyancy upon significant surge inundation.

Screws partially drilled into the sides of posts or wedges of wood act as barbs that serve to make installation minimally more difficult, but unplanned removal significantly more difficult as they grab at the mud and roots of the ground. If still in doubt, a bag of ready-mix concrete is one of the few construction materials that’s still fairly cheap these days and can do wonders for post stability just about anywhere.

Of course, utilizing non-buoyant materials would be best, but something like metal brings its own challenges, both in additional costs and being more difficult to transport to the remote location ducks and duck hunters seek.

Before heading out to build this year’s blind at your favorite duck hole, give some additional thought to what you’re planning to install below the ground surface. Properly investing in this aspect could be the difference in whether or not this construction effort is a one-time hassle, or an annual headache.