After a pretty intense game of cat-and-mouse this past weekend, Clint Gray and Eric Templet teamed up and eventually put down a six-bearded gobbler Sunday morning in West Feliciana Parish that, once officially certified by the National Wild Turkey Federation, will become Louisiana’s No. 2-ranked atypical gobbler in the all-time record books.

Gray, from Zachary, was the shooter hunting on property near Spillman, and Templet, who lives in Ethel and co-owns Sheaux Stopper Custom Calls, helped lure the big gobbler into range with his Triple V Cut diaphragm call.

The two have been hunting together for years, and have bagged many gobblers — but none quite like this. 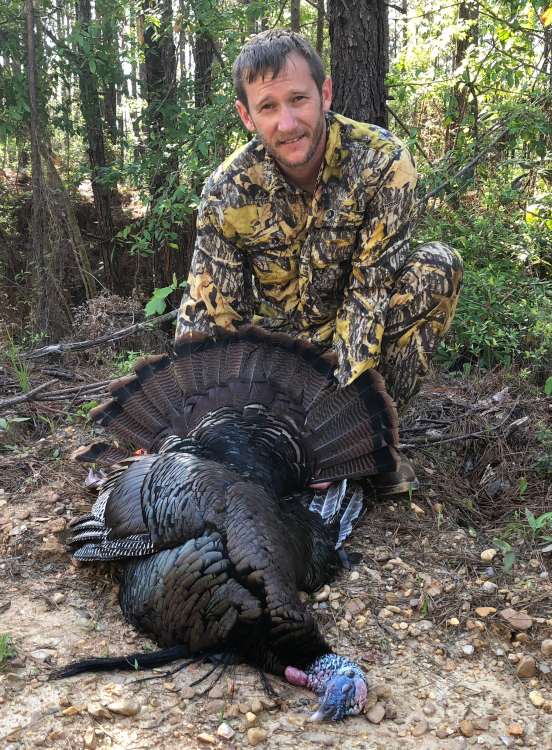 “We had actually went Saturday morning and heard a few turkeys and set up on this one, and got to a place where it was comfortable strutting, and it strutted for an hour or two,” Templet said. “Then a couple hens came in and took it off down the road. We kind of hung tight to see if we could get it to come back, but it didn’t — so we went back that next morning on Sunday.

“We got in the same area it was strutting and set a decoy near the side of the road, and made some soft calls — he was gobbling 80 or 100 yards away and flew down. He came out on the logging road strutting, and he was taking a step about every five minutes. Having to watch him like that seemed like it took forever for him to get to us, gobbling the whole time.

“We were set up perfect where we had a mound of dirt with some pine trees with our backs up against it, and he finally got into a spot in plain view where he was about 25 yards.”

Gray fired and the gobbler went down, but neither man was aware of how special the bird really was — until they approached and noticed the six beards, which totaled 45 ¾ inches. Watch the video to see the kill shot, and the hunters’ reactions when they saw the bird up close.

“When we got to totaling up the numbers and researching the NWTF and Louisiana record books, and started seeing how the point system works with beard lengths, spur lengths and weight … we kind of roughed it to where it would be in the Top 5,” Templet said.

But aside from more than 45 inches of beard, an official scorer also tallied the 1-inch spurs on the bird, which was estimated at 4 years old and weighed more than 16 pounds — coming up with an official score of 127.375 that if approved actually will be the No. 2 atypical turkey in the state.

Templet said Gray is getting the bird mounted, a great keepsake of a rare specimen — and a weekend when their team plan worked to perfection.

“I think with all those other birds in there, and that kind of being his little area where he wanted to be, him knowing a hen was close and other turkeys were gobbling in the area, he had to get into his strut zone to make sure his ladies were taken care of by him and not anybody else,” Templet said. “The call got his attention, but I think all that had a lot to do with it, too.”

Jared Serigné went duck hunting for gadwalls and then Chef Sohail Zandi of Brushland Eating House in Bovina, N.Y., cooked them up. […]

Jared Serigné went to the Ducks Unlimited Roadkill Cookoff in New Orleans to try dishes cooked with meat that could be harvested in the wild. […]