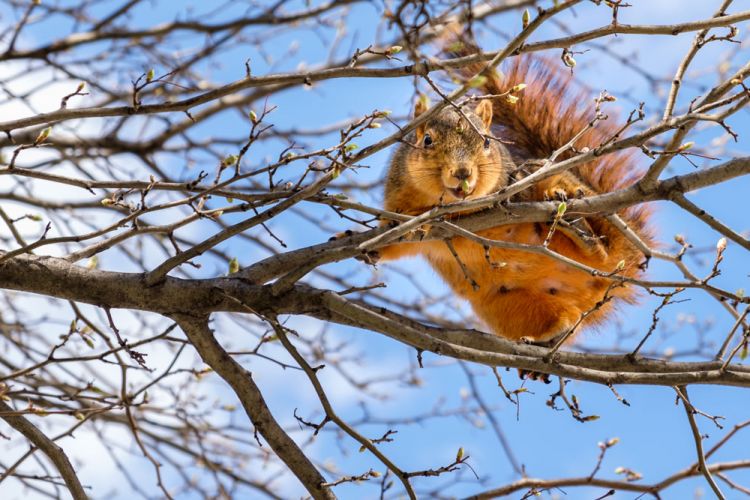 Fall is here. Hunting season is here. It’s the first big weekend at the camp. The list goes on and on, but at the core of it all is this simple fact: For fun and challenging hunting, squirrels are hard to beat.

Historically in Louisiana, as in all the southeastern U. S., squirrel hunting has always been extremely popular. The season typically opened a month in advance of gun seasons for deer, so most hunters focused on bushy tails until then. Where I grew up, everyone hunted squirrels and it was customary for kids to start out on squirrels before being allowed to “graduate” up to deer. For many of us, it just isn’t hunting season without squirrels.

More recently, deer hunting has soared in popularity. Early archery and primitive weapons seasons put hunters in deer stands as early as September, and through the entire month of October. Squirrel hunting was pushed to the back burner, and as a result some of the woods craft and hunting skills it teaches have been lost. That’s a shame and a lost hunting opportunity, since most places with good deer habitat will have some squirrel timber as well.

Anyone who skipped over the basics of squirrel hunting might realize they are missing out on additional hunting opportunities. Do you have children, or know beginning hunters wanting to give squirrels a try? For the beginners and those of us who need a little refresher, let’s take a look at some basic squirrel hunting techniques that are sure to put you on the right track.

Where to find them

Squirrels feed on a wide range of nuts, berries, fruits and grains, and are found near available food sources as the seasons dictate. In the fall their top choices are acorns, pecans, hickory nuts, beech mast and green pine cones, plus a number of other less common seeds and berries. As a rule of thumb, in bottomlands look for oaks and pecans. In mixed pine and hardwoods, focus on creek bottoms and look for hickory, oak and beech.

Pre-scout the hunt area and look for trees bearing acorns or other mast, with fresh squirrel cuttings on the ground. Pay attention to pines where squirrels have cut heavily on green cones. Squirrels start cutting pine cones in mid- to late-summer, and rely heavily on them until acorns and other fall masts have matured. Areas where squirrels have fed on pines that are in close proximity to oaks, hickories or pecans heavily laden with mast are top squirrel producers.

Locate feed trees with nearby or surrounding low growth timber, or trees with abundant vines. Remember those locations and be sure to hunt them. Why? Squirrels are preyed upon by hawks, owls and other predators. They use dense cover such as a low canopy or dense vine growth to travel to and from the feed tree, taking advantage of the protection from hawks and owls while staying out of reach of bobcats, foxes and coyotes.

Good squirrel hunters fall into two categories. Some hunt fast, moving through the woods at a steady pace, letting their eyes do the work of spotting any moving squirrels. When a bushy tail is located they move in, make the shot and spend a little time looking things over thoroughly before moving on to the next squirrel. This method has both advantages and disadvantages.

The upside is if squirrels are widely distributed over the area, the fast mover will encounter and bag more. He also will be dealing with a moving squirrel, which is easier to see and shoot,  plus he’s not wasting time standing around in a spot devoid of action. The downside is if the hunting area is small, he will run out of ground pretty quick. He will also walk past squirrels sitting still while feeding, and those that saw him and hid.

There’s good and bad news for the slow mover, too. If feed is scarce, the slow hunter may find and stick with a good feed tree, which can attract squirrels from a distance. It is not unheard of to sit in one spot on a prime feed tree and take a limit. And when squirrels are not moving much, the slow hunter is apt to see or hear more when the animals finally do decide to move while feeding or changing locations. The bad news is if squirrels are scarce, chances are a slow stalker won’t go far enough to reach a better spot.

Look — but listen, too

It’s easy to spot vigorously moving limbs and leaves when a squirrel shakes things up moving through the trees or hanging out on the end of a branch to reach an acorn. But it gets a whole lot tougher when they are tucked in tight in a big pine tree gnawing on a pine cone, or hiding behind leaves while sawing on a hickory nut.

At those times, the hunter’s ears will often reveal what can’t be seen. Listen for the sound of sprinkling rain. If it sounds like rain, but isn’t raining, start looking for the source. Falling cuttings sound just like rain drops. Find the source, and you’ll find the squirrel. Bushy tails can also easily be heard cutting through the rock-hard shell of a hickory nut.

Additionally, listen for the sound of squirrel claws on tree bark. It is not unusual to find a couple of squirrels playing chase up and down a tree, and it can be heard quite well on quiet mornings. A squirrel’s alarm bark will give it away as well. It’s often confused with bird calls by beginners, so learn the difference — and when it’s heard, start looking. The squirrel is usually in gun range.

The majority of squirrel hunters choose a shotgun. That’s the better way to go in early-season when things are still green, and visibility is no more than a fleeting glimpse through leaves on a running grey squirrel. Choose modified or full choke tubes, and pattern the gun with 6-, 5- and 4-shot to determine which works best. Squirrels are tough, and require a solid hit to avoid crippling. A shotgun is definitely recommended for beginners.

Using a .22- or .17-caliber rifle will certainly make things more interesting — if not more frustrating. My son, brother and I all use .22s almost exclusively for squirrels. We love rifles, and hunting squirrels gives us the opportunity to get a lot more shooting done than we ever will in a deer stand. The .22s also give us much needed practice shooting from improvised field positions in actual hunting situations. So it’s great prep for deer and elk.

Don’t let this October go by without giving squirrel hunting a try. If you haven’t done it in a while ,it’s a great return to the basics. And for first timers, you’ll get to find out what you’ve been missing.