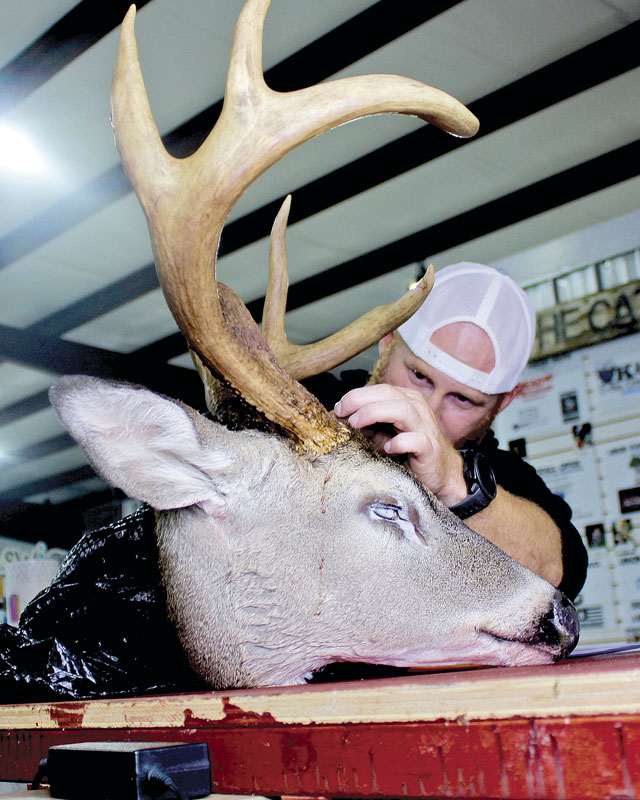 Scoring trophy bucks puts everybody on a level playing field, but scorer Greg Hicks says every deer is special and hunters should enjoy their experience no matter the final numbers.

Hundreds of “140 class bucks” have walked out of a thicket, been harvested by a great shot and taken to town by proud hunters. Then something interesting happens.

Welcome to the world of official deer scoring.

It’s a world Greg Hicks lives in every week during deer season.

Hicks quickly points out two important facts about scoring deer. Every deer is special to the person who killed it. And it’s not all about the score. There’s much more.

“Oh, there’s no doubt that every time I score a deer, there is high anticipation,” Hicks said. “When it comes down to the final and it’s a little bit less than what he or she wanted, I start pointing out the good characteristics of the deer. Every one is unique in tine length, color, shape — it’s all part of the hunt. No matter which way it goes, I always want people to leave my table feeling positive about their deer. The score is just part of the experience that the hunter will remember for a lifetime.”

Sometimes there is even a surprise for a hunter scoring a deer.

“Often somebody will bring one in and say what they expect, but they may have much more,” Hicks said. “I’ve been doing it long enough to have a good idea when I look at it what they’ve got. There’s not much more pleasing than to score a hunter’s deer and them be ecstatic over the results.”

Scoring deer has also taught Hicks a lot about the people who kill big deer. And the main thing he has learned after hundreds of big racks laying on the table in front of him?

“There are times when you can spot a big, healthy buck and watch it grow a few years, then harvest it,” he said. “That’s exciting. But the thing I’ve learned in my nearly 10 years of scoring deer is just go hunting. Just get out there. Find where deer are and hunt hard. And I know this will make some trophy hunters cringe, but when it is your time to kill a monster deer, sometimes it is just your time. I can’t tell you how many people come up and tell me they didn’t know that deer was in the world and ‘Bam’, it just walked right out in front of them. That’s the most important thing I think I can tell people. Just to go out there and hunt. And if it is your time, it’s your time. Always be ready and have hope.”

There are highlights every season for Hicks, who was encouraged by Buckmasters Regional Director Cecil Reddick to get certified and begin scoring deer. Hicks followed up on that. The first local deer he ever scored and turned in was a bow kill by Dan Preaus that measured 150 inches.

Buckmasters scores based on inches of antler, Hicks said. The first thing tallied is the inside spread, then the main beams and the length of each tine. A tine has to be at least one inch to be considered a scoreable point. Lastly, you take the circumference measurements in four spots along the main beam. When you finish, double check the numbers and tally them up, you have the gross score. It’s a process that an official scorer has to make with confidence and concentration much like a major league baseball umpire. You have to do it enough to trust yourself to do it right and make the right call. It means a lot to people and it means a lot to Hicks, too.

Sometimes a hunter may come in with a huge 8-point and another hunter have a smaller 12-point. To the naked eye, the eight looks bigger, but when you go through the process, the 12 may have more inches of antler and score higher. It’s a consistent process that evens the playing field for everybody. The result of scoring a deer is much like putting a big bass on the scales. The numbers don’t lie.

Hicks also points out that not all the racks he scores are recent kills. Sometimes people bring in deer they killed years ago that were never scored just to see how they fare. Recently, two men brought a deer their father had killed 30 years ago that had been in storage most of that time.

Hicks was raised in the rural Salem community near Farmerville and spent his time with his three brothers and grandfather talking about hunting and the outdoors. It’s where he learned to tell stories and to love the outdoors. Today, he’s the Environmental, Health and Safety supervisor at nearby West Fraser and he’s the father of two daughters, Addison and Peyton. They have grown up hunting with him and have both killed deer. That family experience also motivates Hicks to give back to the sport. He has a growing social media presence with his Antlers and Hicks stories, which you can follow on Facebook.

“There is no doubt about it,” he said. “When a young boy or girl comes up to the table with a nice set of antlers, it’s exciting to me because you know it is exciting to them. I usually talk through what I’m doing with them and want them to know exactly how we do this. I also love to talk to them about their hunt and how they killed the deer.”

Recently Hicks was able to score a deer of a lifetime for local 9-year-old Abram Riser of Downsville. The buck was estimated at 4 ½ years old and scored a whopping 150 3/8”. While the process of scoring deer and tallying the results is complicated, the tools of the trade are simple. Hicks starts with a wooden Mason’s folding ruler to measure the inside spread. It goes straight across between the beams and is super accurate. He uses a regular soft measuring tape for the circumference of the beams and a regular retractable tape for the tines. Measuring the beams length can be done with a string from the lowest base of the antler, up the back side and right along the antler. Hicks puts an alligator clip at the end of the tallest point and then measures the cable with the Mason’s tape. He always does the main beams twice just to double check. He then records the numbers on an official scoring sheet, signs it and has the hunter put his or her information on the official sheet.

Hicks said he could spend all day talking about the bucks he’s scored and not even get close to covering all the stories. But three deer stick out more than any others since he began scoring deer. Lets call them his non-typical scrapbook deer.

First of all, the “Broadhead Buck.”

“Several years ago a guy brought in a big rack and said ‘ya’ll be careful with this one’ and he pointed down to the main beam,” Hicks said. “There was an expandable broadhead from an arrow stuck in the main beam. A bowhunter had apparently been looking at the rack when he shot and the arrow hit dead center in the main beam on the inside part. It was still pretty sharp and a little bit tricky to handle.”

Hicks also treasures the first buck he ever scored and posted to social media in 2014, a 194 class buck taken by a hunter in Mississippi. And the largest free-range deer he ever put a tape to was entered in the Big Buck contest at Simmons Sporting Goods. It was a 231 3/8 buck harvested from Kansas. In between, he’s lost count of how many bucks he has scored.

For the love of the game

Greg Hicks is always prepared for the question and he never wavers on the answer: “How much do I owe you for scoring my deer?” The answer is nothing. He does it for the love of the game.

“People try to pay me all the time and I don’t like taking it. Heck one man wanted to give me something so bad one time because I wouldn’t take his money, so he reached in his truck and gave me a big bag they put cotton in. I still have it today as a reminder of good people in the world. Too many people today are using hunting and fishing as a way to promote themselves. We need more people doing things strictly to promote hunting and fishing. That’s my whole thing with scoring. It’s why I do it. To promote the lifestyle I love.”