It was five seasons ago when Daniel Sharkey had his first encounter with his buck of a lifetime. He and his son, Rilee, were in a stand on property they hunt in Tangipahoa Parish when they noticed a cedar sapling being shaken as a big buck was rubbing on it. They weren’t able to get a shot at the buck, but five years later on Dec. 12 it all came together and Sharkey was standing over the form of the biggest buck he had ever seen.

“I live in Kentwood and hunt on some 1,000 acres of land in Tangipahoa Parish, some of which I own and some I have leased,” Sharkey, age 41, explained. “The land features a mixture of pines and hardwoods with thickets of yaupon giving deer a good place to hide and hang out.”

The buck had been given the name “Ghost” because it was so elusive. In fact, except for the sighting he had five years ago, a few trail cam photos were the only evidence that the buck was still hanging around. Sharkey, a Lieutenant with the Tangipahoa Parish Sheriffs Office had been running trail cameras for the past few years hoping to be able to nail down where the buck was hanging out.

“We would get pictures three or four days in a row and then he’d be gone for up to two weeks before he’d show up again,” Sharkey said. “On Dec. 4, he started showing up again on my camera.”

Sharkey was on his tripod stand Saturday, Dec. 11, and an hour later, a doe came rushing out of the woods. He felt like maybe it was about to happen.

Sharkey had a feeling that with the estrus doe in the neighborhood, there was the chance that the big one might show himself. He decided to be in his stand the next morning, Sunday, Dec. 12, with the plan of sitting until 8 a.m. which would give him time to go home and go to church with his family.

“I was on my stand that morning and I could hear a lot of running and grunting as I knew the rut was on,” Sharkey said. “My buddy, Seth, was hunting a nearby stand. We were texting back and forth and I told him I was going to get down at 8:00 to head for church. At 7:47, I collected my gear preparing to get down when I looked to my left and saw a deer standing there. I picked up my gun, got the scope on it and could tell it was a good deer. A bush obscured most of the rack so I couldn’t tell what it was except it was a good one and I decided I was not letting it walk.

“I knew there was a big 8-point in there and it could have been him. When it stepped into an opening quartering a little toward me, I took the shot and it took off.”

Texting his buddy with a BBD (big buck down) message, Seth came to help Sharkey and they noticed that the buck had run through, not over nor under, a 5 strand barbed wire fence, actually breaking two of the wires. This was evidence, he felt, that the buck was hit good since it didn’t jump the fence.

“Seth and his brother Dale came to help me look and we could find no blood or any evidence of a hit,” Sharkey said. “We decided to spread out, I took a trail to the left, Seth took the middle and Dale to the right. In a minute, Dale called out he had found blood. Seth joined him and then they hollered back at me, ‘here’s your deer and it’s the big one’. I thought they were kidding me but when I walked over there and saw him, I knew it was the big one and the five year quest was over.” 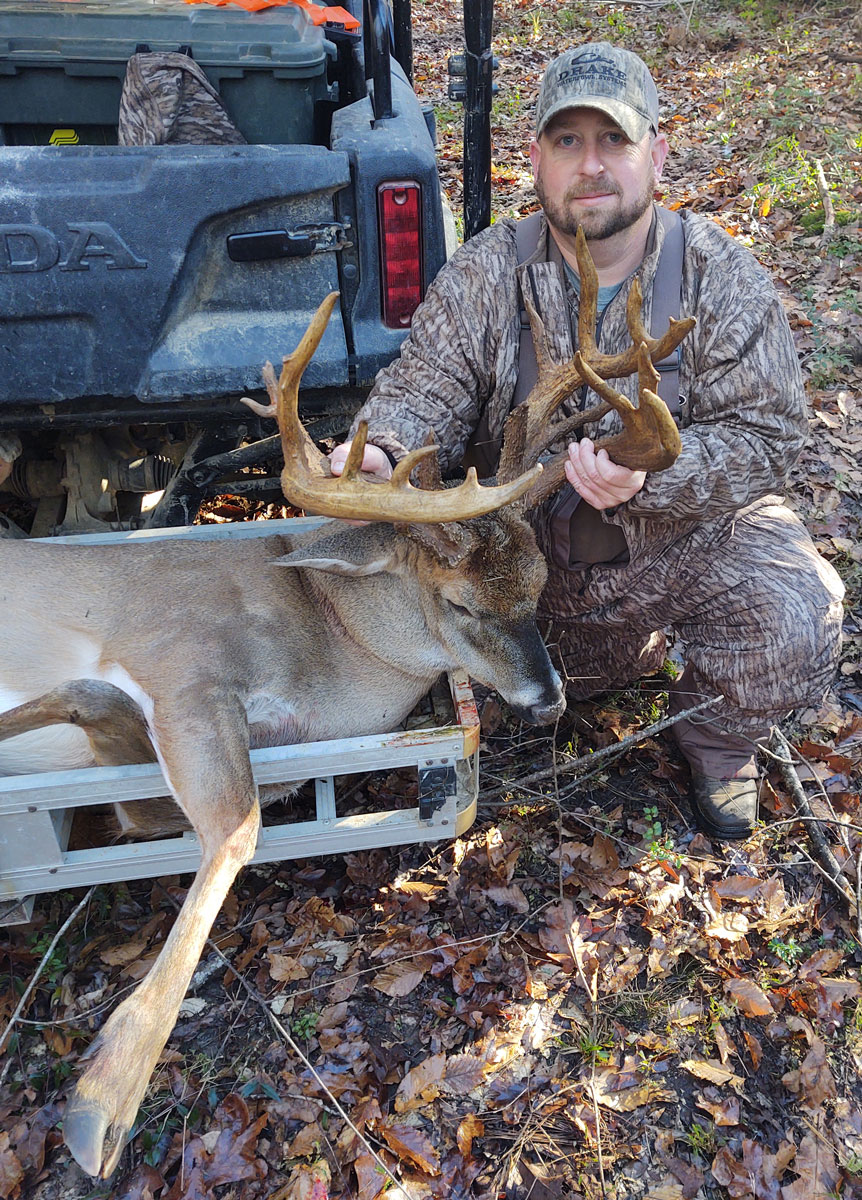 The rack almost defies description with 20 points, 18 of which were scorable. There was an extra main beam with the inside spread being 16 6/8 inches. Weighing in at 242 pounds, the buck was aged at 7 or 8 years old and perhaps 9.

“I called Wildlife and Fisheries to validate my tag and by the time we got the buck loaded and out of the woods, my phone was exploding as the word had gotten around about the buck,” he said. “It was crazy.”

The buck was taken to a big buck contest in the area where the rack was measured at 193 5/8 inches.

“You think Kansas, Iowa or some of those other states that produce big bucks, but Tangipahoa Parish, Louisiana? That,” he said, “is unheard of.”