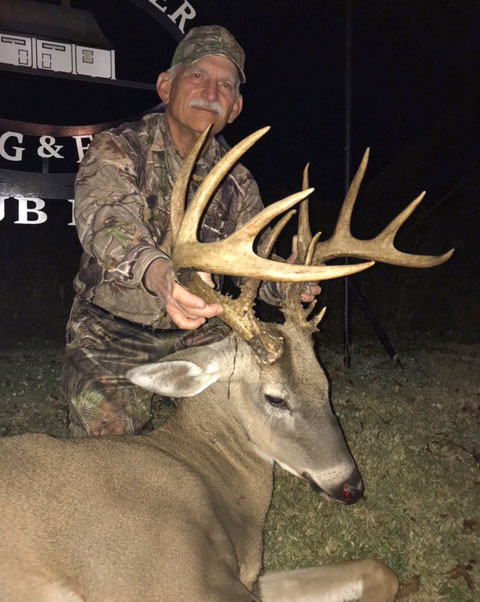 Dr. Jack Cox, a retired anesthesiologist from Ruston, had a “gut feeling” that he needed to be on his deer stand at Winter Quarters in Tensas Parish the afternoon of opening day of gun season, Nov. 20. Following his hunch, he was able to connect with a big 14-point buck, a deer that had earned the nickname of ‘Brows” because of extra long brow tines.

“We had been getting trail cam photos of this particular buck for the past three years when he was at least three years old at the time,” said Cox. “Several of us, including my nephew, Lane Cox, had ‘Brows’ on our hit list and it was just a matter of which one of us would have the chance at him. Fortunately, I was at the right place at the right time when he came out.”

Cox had determined that the buck was hanging out in a 350 acre block of woods that had been cut-over six or seven years ago creating ideal habitat for the buck to feel safe. 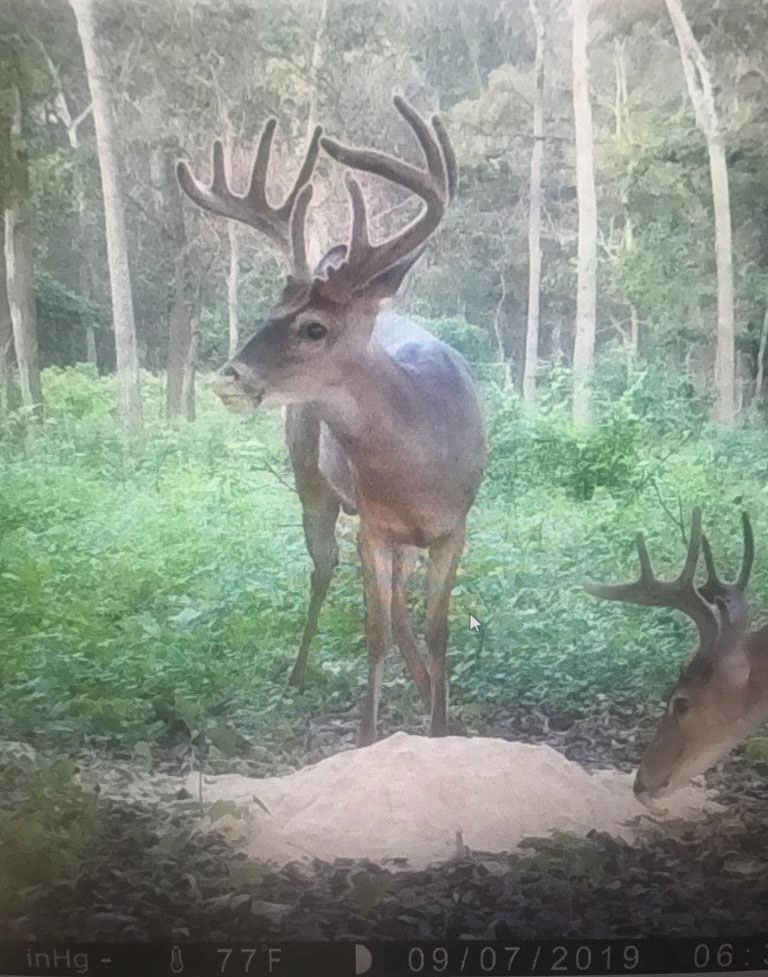 “I had erected stands around that block, one set for a north wind and the other for a south wind,” Cox said. “My cousin and I hunted that morning of opening day without success. My cousin said he was headed back home after the morning hunt and I decided I may as well do the same.”

However, Cox had what he called a ‘gut feeling’ that he needed to be on his stand that afternoon so instead of heading home, he decided to get on his stand.

“The weather was quite warm and clear when I got on the stand favoring the south wind as the wind was out of the south that afternoon and I got in the stand around 2:45,” he said.

The stand sat on the corner of a big wheat field that was lined on the west side with a 30 yard wide strip of cockleburs. A single shooting lane had been cut through the thick cockleburs giving the only view of the woods on the other side.

“It was so hot and I was facing west into the bright sun so I decided to turn my back to the sun and face the east, occasionally looking over my shoulder,” Cox said. “Some deer had started to come out of the woods the way I was facing and when I turned around to look over my shoulder, there stood ‘Brows’. I couldn’t believe it with all the night time photos of him and now he’s here at 3:25 in the afternoon.”

Two years ago Cox, who shoots from his right shoulder, had an event he thought might have been a mini-stroke that left him with blurred vision in his right eye. Therefore, he learned to shoot left-handed and killed a few deer from the left side.

“When I spotted the buck that had started walked toward the cocklebur thicket, I momentarily forgot about the need to shoot left handed and I put the gun on my right shoulder, got a quick sight picture and shot,” he said. “The deer was knocked back into the thicket and that’s the last I saw of him.”

Winter Quarters has a rule that if you’re on a stand, nobody can leave a stand between 3:00 and dark to avoid disturbing other hunters.

“I texted the caretaker, told him what happened and got permission to climb down and check for sign,” Cox said. “I got down, found a pool of blood in the cockleburs and saw where he crossed the shooting lane. Since I didn’t see him cross, I must have pushed him out as I went into the other side of the patch.”

After texting and calling Josh Cook, who has a blood trailing dog, Cook and another friend with a dog got on the trail and found the buck that had expired some 400 yards from where it had been shot. Cox’s shot had hit him far back in the ham which allowed the buck to travel that far. 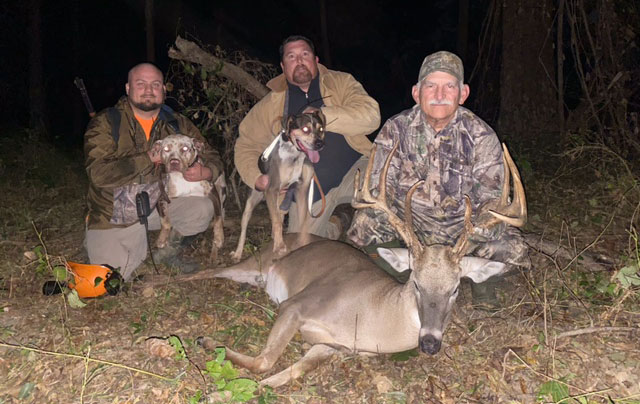 The buck was a dandy sporting a main frame 10-point rack with four sticker points for a total of 14 points. The 6 ½-year- old buck weighed 204 pounds, had an inside spread of 18 4/8 inches. Bases were 6 inches each with the last measurement being over four inches. The rack was measured at 167 6/8 inches.