Chris Temple of Vidalia has been hunting deer since he was 10 years old. He has killed multiple big deer and seen even more over the years in his long hours working outdoors as a farmer in Catahoula Parish.

But when a monster buck that hadn’t been seen for two years by his hunting partners stepped out in daylight for the first time, the deer’s rack was so impressive it even gave him the shakes. It should have. The 12-point deer weighed almost 300 pounds and the rack was officially scored at 190 7/8. That gross score is higher than the Louisiana State record for gun hunting in the Typical category. That is before deductions that could possibly be taken and the antlers have to dry out for 60 days and be remeasured to determine its place in the standings.

In the meantime, the deer is causing quite a stir among hunters and those who keep the record book. The Louisiana record is currently 186 6/8 held by Marshall McKay and killed in Madison Parish in 1939.

“We saw this deer on camera two years ago and he was big then, but then he just disappeared,” said the 46-year-old Temple. “We thought maybe he had been killed. Apparently he moved off our area to another and hadn’t come back until I saw him and shot him on Tuesday, Dec. 7.”

Temple had been in the stand overlooking a food plot for a while when deer started to gather in the plot. He had counted 13 deer in the food plot including some smaller bucks that were grunting and running around fooling with the does. He was checking his watch and knew shooting time would be over fairly soon when something strange happened.

“All those deer, every one of them, threw their heads up and looked straight into the woods,” Temple said. “Then they threw up their tails and ran off as fast as they could in every direction into the woods. I’d never seen anything like that before.”

He looked around a little bit, then suddenly noticed the big bruiser had stepped out about 10 yards out in the field with his head down. Then Temple knew what was going on.

“All I saw was horns. Oh my gosh, I knew it was him,” Temple said. “By the response of those other deer. He was King of the Woods.”

Getting over the nerves

Temple raised his Ruger 270 armed with reloads by a friend, Larry Roark. He looked at the big deer through his scope about 170 yards away. But he couldn’t shoot.  He was shaking. Who wouldn’t have been.

“I took a deep breath and told myself to settle down, but it didn’t work,” the veteran hunter said. “A couple of minutes passed and I took another deep breath and another. Finally I got a grip and told myself I had to do it. I had to make the shot. Time was running out. So I got him in the scope and pulled the trigger. He disappeared from the scope when I shot. I looked around but couldn’t see him, but when I put the scope back on the spot he was standing in, there he was, laying on the ground right where I shot him.”

Temple called his son and then some other friends and said he needed some help, he had killed the biggest buck in the woods. He went back to the camp to meet them, but they weren’t real serious about it.

“I’ve played some tricks on them before and they were like ‘we know better’ but this time it was real,” he said. “When we walked up to that big deer and the lights shone on his antlers, everybody was just stunned. They couldn’t believe it.”

Temple has been back in the stand a couple of times since then, but he told his son he didn’t know if he could ever shoot another buck because it would be hard to top that one from the Cash Bayou area of Catahoula. And while he waits for the mandatory drying time and to see how many deductions there are before the final official scoring, he said sleep may be a hard thing to come by, too. 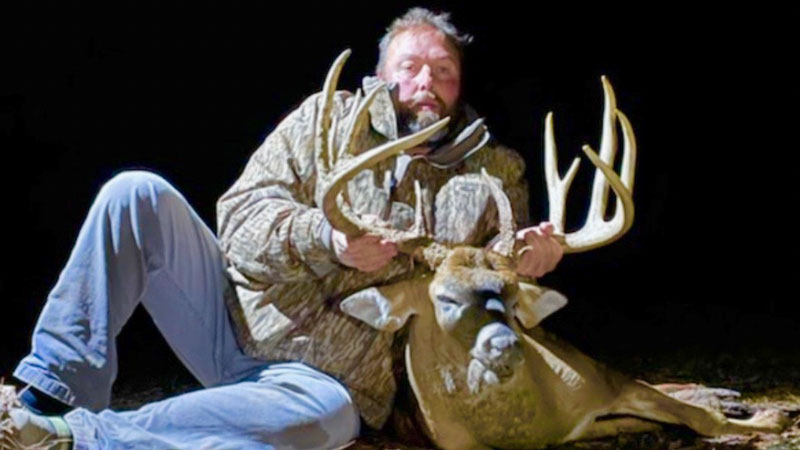 “I’m still in awe of its characteristics,” said Greg Hicks, who scored the deer first. “Chris Temple’s deer has a 20 4/8” inside spread, beams over 25” (one was over 26”), four tines over 11”, and over 5” bases. The non-typical or irregular points total just a little over 7” together.