Well, it is now December here in the Deep South, and as far as patterning mature bucks this is the time when the rubber meets the road.

As a trail camera user, you might have already had a few cameras out, starting in the pre-season “velvet period,” and captured pictures of some interesting bucks.

And you might be considering pulling your cameras and concentrating on hunting for the remainder of the season.

If so, stop and consider the fact that when you are trying to camera-track bucks there really is no off-season. Continued creative camera deployment can provide tremendous insight on bucks.

Unless you have installed GPS collars on all of the bucks that cycle onto and through your property, trail cameras are the very best tool you have in order to identify and determine behavior of big bucks you would like to hunt.

Buck behavior is a very fluid thing, especially leading up to and during the rut. The most consistent thing you can say about mature bucks this time of year is that they are consistently inconsistent.

And buck behavior can change dramatically on a seasonal basis, with a buck’s core and home area expanding or shifting.

This is exactly why you should keep your cameras in operation, with no downtime — especially if one of your goals is to consistently harvest mature bucks.

Over the years, my trail camera trap line has revealed that many mature bucks have one core/home range for summer and one for the breeding season.

It’s great to get photos of good bucks during late summer and into early fall, but due to seasonal shifts where will they be December and early January?

During the pre-season and early season time frames, I keep a web of cameras posted on food sources and known travel ways, but at the first sign of scraping activity I shift things around a bit.

Even as I shift focus to scrape locations, I leave a handful of cameras on known hotspots, such as pinch-points, field corners and the like.

When I take my male Pomeranian out for a short “potty” walk before bedtime, he knows where all the hot spots are and he leaves his own calling card at each, whether it is a particular shrub, tree, or fire hydrant.

Bucks also develop regular circuits of scrape locations they often return to on a regular basis.

So the sudden appearance of heavy scraping activity, changes the game plan for me. Most scrapes are visited and utilized by multiple bucks of all ages. You absolutely could not find a better place to identify and monitor bucks during the month of December.

Unless this is your initial hunting season on a given hunting property, you probably already know of specific scrapes that reappear in the same locations year after year. These perennial scrape locations can be worth their weight in gold, if you stealthily move cameras into place to monitor the comings and goings of the bucks that are using them. 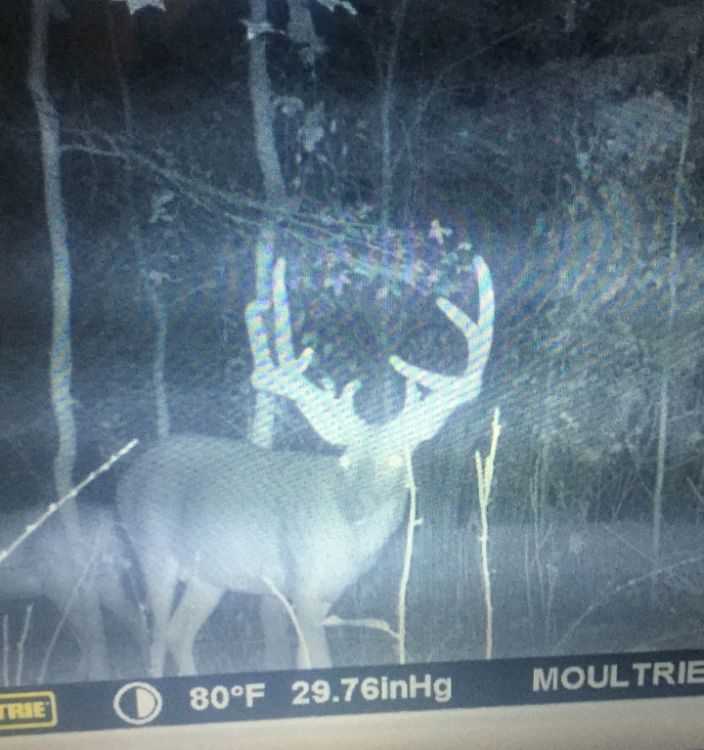 You might want to keep a few idle cameras on hand in order to take advantage of scrapes that suddenly pop up. During the early part of the scrapping season, I often keep an extra camera in my hunting fanny pack so that if I see a new scrape on the way to and from the stand, I can waste no time in getting surveillance set up.

Over time, as you observe and experiment with various locations and setups, you will establish a short list of camera scrape locations that consistently produce photos of mature bucks.

Be prepared for some after-hunt argument around the campfire that getting a few photos of a particular buck at a scrape doesn’t amount to much or that they only visit scrapes at night. When I hear this sort of jabber, it just indicates to me that the naysayer does not have much experience hunting mature bucks.

Developing fresh intel on mature bucks is a guaranteed way to improve your hunting odds.

In my experience, the absolute best time to utilize what you glean from scrape surveillance and to score in the vicinity of hot scrape lines is during the roughly week-long period that straddles the seeking and chasing phases of the rut. This dynamite window of opportunity starts about a week and a half before breeding crests for your specific local.

During this short window, bucks are on their feet — often during daylight — making and checking scrapes, and patrolling for estrus does. This is when mature bucks are the most predictable and vulnerable, which increases your odds of success considerably.