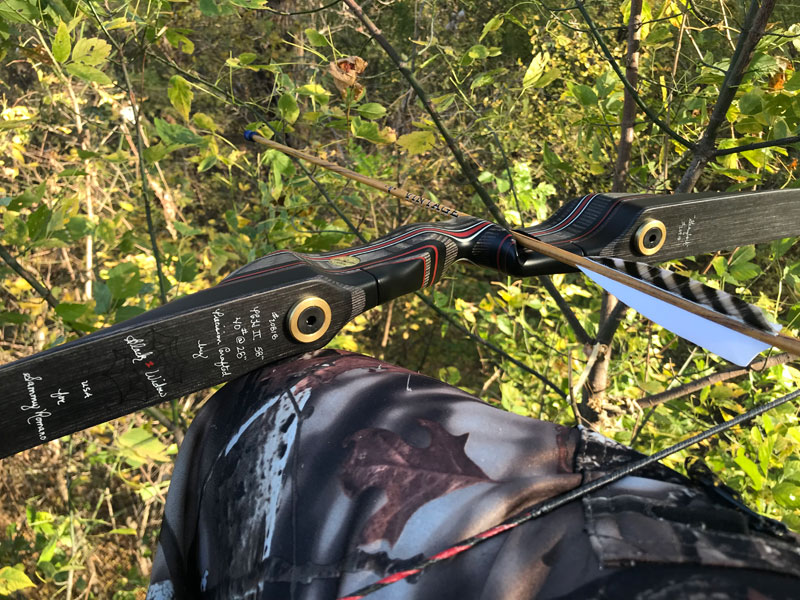 I remember when I first started bow hunting over thirty years ago like it was yesterday. Deer were scarce, and compound bows didn’t have near the technology that they do today. It was difficult enough to take a deer with a compound bow, and I scoffed at the thought of going into the woods carrying only a bare wooden bow and a few arrows. It has been said that time changes everything, and that is certainly true in this case. Over the last thirty years, not only have deer populations increased significantly, but I’ve been blessed to take many animals with my compound bow, including some nice bucks.

The next step was that I found myself wanting to increase the challenge again and tip the odds more in favor of my quarry. Regular readers of this column know that in an effort to do so, a little over a year ago I picked a recurve bow up with the goal of taking a deer with it. This is the story of my journey down that rabbit hole, or should I say deer trail. Hopefully it will inspire some of you to do the same, as well as shorten your learning curve compared to mine.

Working in the archery industry afforded me the opportunity to meet many incredible people and be invited to hunt some amazing places. Many of my closest friendships have been formed through archery. Two years ago, my buddy Scott had me order him a recurve bow and, in the process of setting this bow up, I rediscovered how much fun they are to shoot. In fact, I enjoyed the simplicity so much, that I purchased one of my own and began playing around shooting it in our range. Scott dug in and got it done on a nice 10-point buck at his place up in Arkansas later that year from the same stand that I killed a beautiful 9-point buck out of with my Mathews bow in that November. This was when I made up my mind that I was going to do this thing! Although I shot that bow fairly well, I just wasn’t consistent enough to feel confident taking it into the woods.

One Saturday in August of 2020, a friend brought a Black Widow bow in and I was able to try it out. The following Monday I was on the phone with the factory ordering one of my own.

My new Black Widow bow arrived in January of 2021. I was able to become accurate with this bow very quickly, and in early February I made a quick evening hunt in the marsh close to home. I saw several deer, but the only one in range was a young buck that I elected to pass. Even though I was accurate most of the time, I still would have the occasional “Where the hell did that go?” flyer. Scott and my other friends were having similar problems, and none of us could explain these misses. This led us to search for answers, and the solution was a weekend archery clinic in March with Rod Jenkins, a three time world champion and world class coach. Rod was quickly able to put us on the path to proper form and increased accuracy, probably saving us years of struggling. In late spring I buckled down and put in my time doing drills and then practicing each morning for at least 30 minutes. Traditional archery requires you to put in the time almost daily to maintain both the strength and form required for consistent accuracy.

A great way to keep out of the woods is to run an archery shop, and this fall was no exception. Early bow season was even busier than usual, and it was looking like I wouldn’t have the opportunity to hunt until late in the year again. A last minute invite to Scott’s property in Arkansas was extended, and I jumped at the opportunity. It was going to mean a lot of driving for only three sits in the stand, but I didn’t mind at all. The first evening, I only had a cull buck come in and I elected to pass him hoping one of the younger hunters would get an opportunity at him. The next morning I saw several bucks and does, but the only deer I had a shot on was a young spike buck. I practiced hard the entire morning and early afternoon, as it was all coming down to this last evening hunt.

We went into our stands early because many of us bumped deer on the way in the evening before that were on their feet early due to the full moon. I was hunting from a ladder stand on the edge of a 15 acre wheat field. As soon as I settled into the stand, deer began popping out into the field. Although I saw a bunch of deer including two really nice bucks, at 5:15 p.m. none of them had been within range yet. I was thinking my hunt was over and reflecting on how great both my time in the tree and camp had been when I spotted a lone doe standing 40 yards down the field edge.

Things quickly shifted into overdrive as she started to walk my way. I readied myself for the shot and everything was going smoothly until she spotted a rice bran pile put out earlier that afternoon. She immediately stomped and began to “stiff leg” away. I was able to quickly crouch and find a hole in the limbs on a branch in front of me. I drew back, focused on her quartered away vitals and let the string slip smoothly off of my fingertips. As soon as the arrow left the string, I knew it was a perfect shot.

I heard that satisfying “whack” sound, and as the doe wheeled around to run off, I could see my turkey feathers sticking out of the back of her ribs. She made a mad dash across the wheat field and into the woods where I heard her pile up! After a bit of blood trailing we recovered a beautiful doe. All of my hard work over the past year had paid off when it counted most. Because of this, this deer was one of my most satisfying bow kills ever! If you enjoy the process and challenge of bow hunting, traditional archery enhances both of these elements.

You owe it to yourself to give it a try.

The post “My first recurve deer: The culmination of one year’s hard work” first appeared on MS-Sportsman.com.