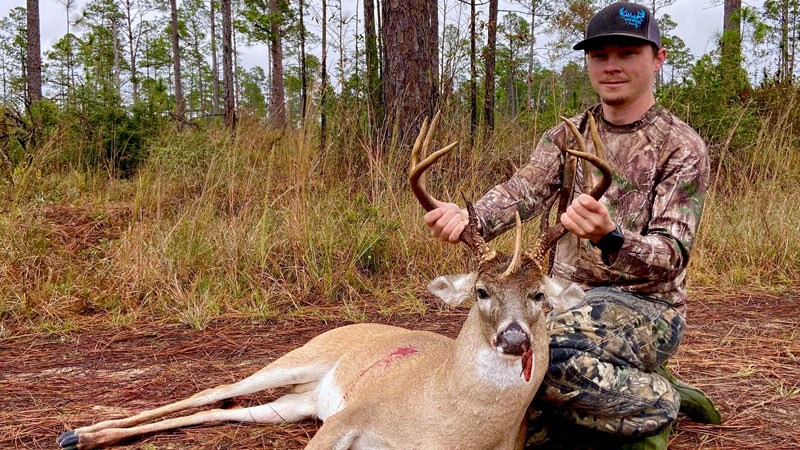 Is there a unicorn in your deer woods?  Well, probably not. But for a short while last week, Louisiana hunter Jared Phillips of Leesville thought he’d bagged one of the mythical creature’s descendants on his hunting club in Vernon Parish.

From C.S. Lewis novels like The Lion, the Witch and the Wardrobe to My Little Pony toys, these mythical creatures have floated around our culture since the Ancient Greeks. And now, Phillips killed a big mainframe 8-point with a perfect 8-inch “unicorn” antler right in the center of its forehead.

“You know, I told myself before the season this year this was going to be my year,” the 27-year old instrumentation tech for Valiant Integrated Services at Fort Polk said. “I couldn’t believe it when I walked up and started to pull this big buck out of the bushes where he’d fallen. I didn’t see the extra antler until then. I had never seen the deer before and nobody on our club had either. Nobody’s even had a picture of him on a deer camera.”

The deer must have been exceptionally wise, because it was a very old deer. It could not even be aged because it had no teeth,” Phillips said. “The deer weighed 186 pounds and was healthy.”

Phillips got to his stand Thursday, Nov. 4 an hour before daylight as he usually does. He was thinking to himself that everybody else was seeing a lot of big deer and he wasn’t. He started praying that he’d at least see one and he picked up his grunt call and gave three soft grunts. He then picked up his bleat can and shook it a couple of times.

“It wasn’t 30 seconds later and I heard a soft grunt off to my right,” he said. “I thought this might be my chance. And then he busted out of the thick bushes off in front of me like he was parting the Red Sea. I saw horns and could see the hair bristled up on his neck.  He stopped and hooked a bush real, real hard. Then he stood up high and gave a loud snort wheeze. That was so cool. As he stepped out from behind the cover looking for that deer he thought he heard, I got an opening. I squeezed off the trigger and he tucked his tail and ran.”

Phillips sat for about 15 minutes and wanted to get down, but decided to wait a while longer because he knew that is what he needed to do. The deer had been last seen about 125 yards away.

“I walked to where the deer was standing and I couldn’t even find a spot of blood,” he recalls. “Then I walked to a big pine tree where I last saw him and picked up a blood trail. I went through the bushes and he was piled up in the brush. I didn’t know how big he was, or about the unicorn horn until I pulled on his rack to get him in the open. I was shaking like a leaf.”

We mentioned Phillips thought this would be his year. Four days after taking the unusual deer, he also killed a big 10-point in the same woods that is his biggest deer ever. Sounds like he was right on his prediction. And he’s heading back to the woods for more.

According to game biologists, antler oddities in whitetail deer aren’t that unusual. Unicorn deer are, however, pretty scarce. Hunters have bagged some pretty unusual racks over the years. These strange antler formations are labeled “non-typical”  and consist of drop or forked tines, palmated beams, sticker points or point clusters. They are usually caused by some sort of injury, disease or a genetic abnormality, especially in older deer.