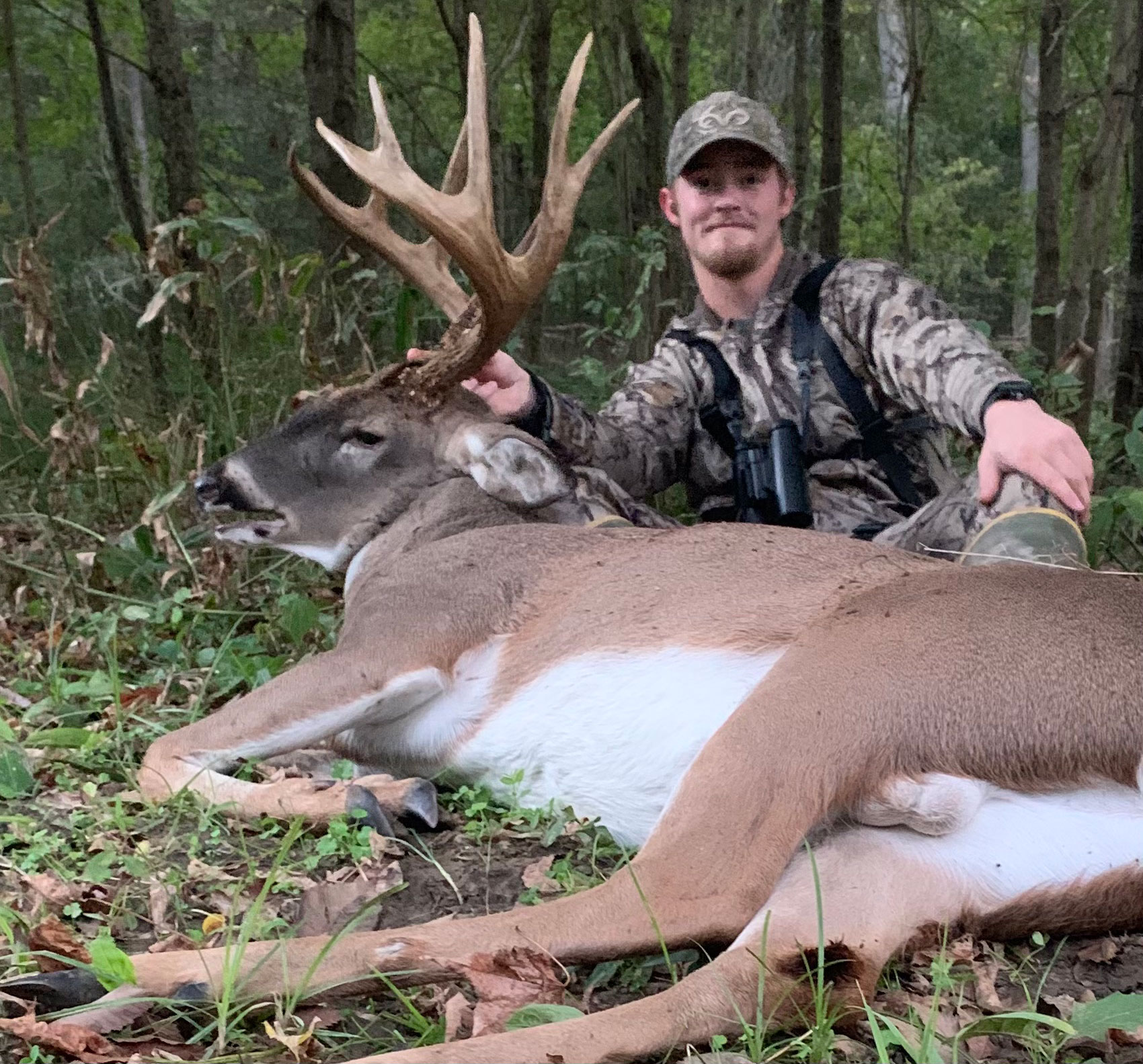 It all started for Zach Jones of Sterlington 8 seasons ago, when at 12, he downed a trophy buck. We wrote about it for Louisiana Sportsman. Almost every year since, Jones’s name comes up, as he has laid another big buck on the ground. (Check out his bucks from 2018 and 2020.)

So it was no surprise when a photo appeared on Facebook in early November with Jones, now 20, posing with another wall-hanger, a 160-inch, main-frame 10-pointer with a characteristic split brow tine.

Jones’ s success has resulted, in part, by the area he hunts. He and his father are members of Ashbrook Island Hunting Club on the Mississippi River, an area that is managed for trophy deer. In addition, Jones puts in the time locating and zeroing in on the big bucks in the area.

Jones has laid his rifle aside and hunts exclusively with archery equipment.

“I hunt with a Hoyt Defiance bow, Easton Full Metal Jacket arrows and Rage Hypodermic broadheads,” Jones said. “This is the same equipment I have used the past three seasons.”

Jones, a student at Delta Community College, will transfer after one more semester to Louisiana-Monroe, where he will major in construction management with a minor in Insurance.

“I have had trail-camera photos of a particular big buck since 2016,” Jones said. “In his first pictures, I saw that he had a split G2, and that’s the way I could keep up with him each year. We didn’t run cameras in 2019, but I have had him on camera every other year. I got my first photo of him this year the day before bow season opened.”

The area where the buck had been hanging out featured a big thicket that bordered a 500-acre bottomland. The deer like to hang out and feed on numerous pecan trees and briars in the area. On the afternoon of Nov. 5, Jones mounted his Millennium lock-on stand around 2:45.

“I was on one side of a ridge where it meets the hardwood bottom in a briar thicket next to an L-shaped food plot; my dad was in a ground blind along the other leg of the food plot,” Jones said. “Around 4, a big doe and her two yearlings came out and were feeding on the pecans that were dropping. Then suddenly, a big hog came up the ridge in a full run, ran out in front of me, and my dad texted me moments later that the hog had run by him at 15 yards.”

Jones’ confidence level dropped after the hog had run through, assuming that the hunt had been spoiled. Two minutes later, however, he looked up to see a big buck 65 yards away on the food plot. It looked like the same buck he had seen three weeks before at 25 yards that he passed on because he wasn’t sure it met the strict criteria that club has in force.

“I think the hog running through probably pushed him out of the thicket, because he stepped out only a few minutes after the hog ran through,” Jones said. “When I saw the split G2 on the antler, I knew it was the one I was targeting. The buck worked his way in behind me and was feeding on pecans. I had to get down on one knee to shoot around a sapling blocking the way. I got on him and released my arrow at 36 yards. The buck ran about 25 yard and fell.” 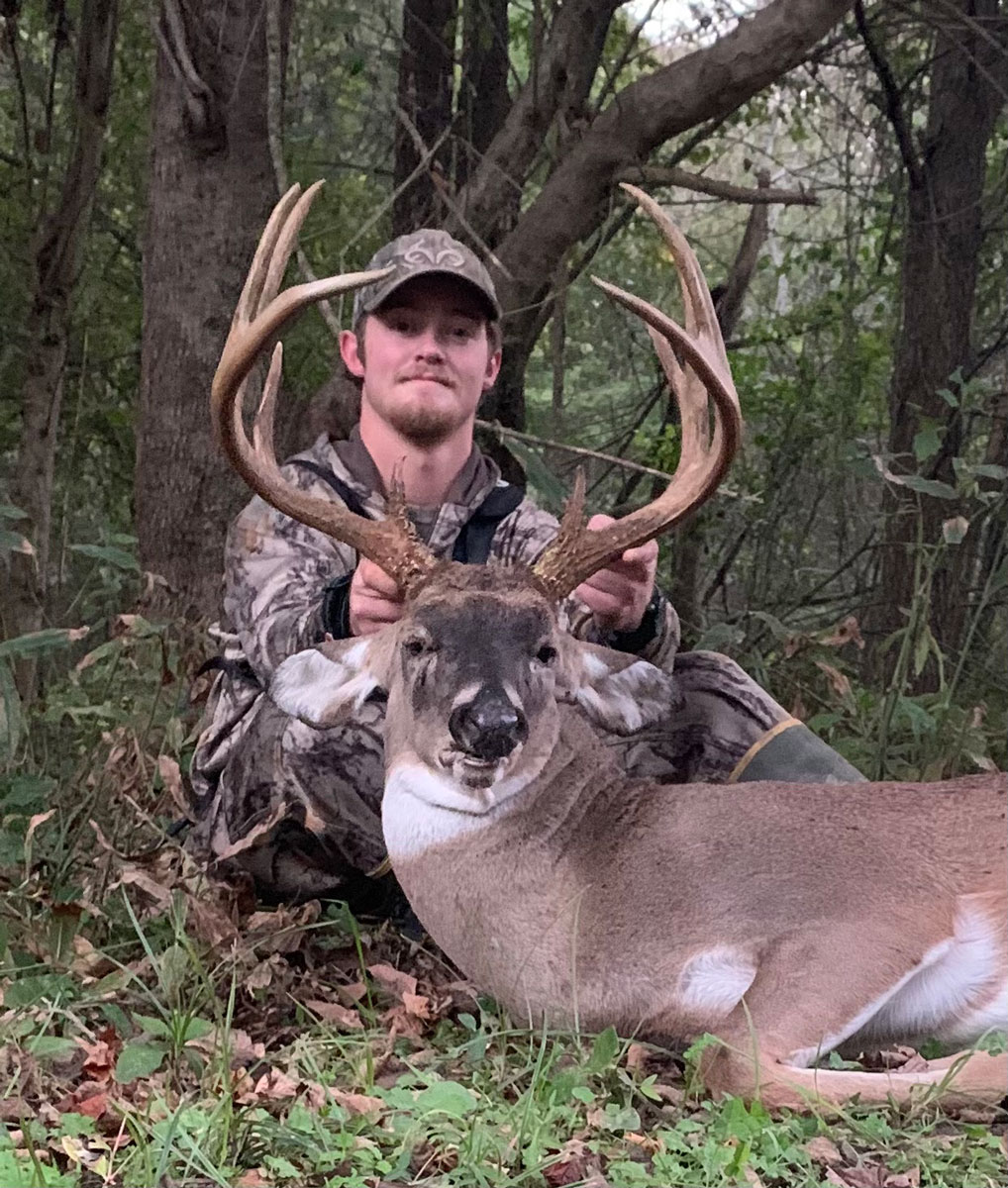