Dedria Brashear, who lives south of Ruston, is a serious deer hunter. Her husband hunts ducks; she concentrates on big bucks.

On Oct. 12, Brashear had a hair-raising experience when she attempted to recover a big 12-point buck she shot in late afternoon when a big bear beat her to her trophy.

Brashear, who works as a relief pharmacist for several pharmacies around the area, hunts on a 1500 acre hunting club in Madison Parish. A 500 acre tract within the club is restricted to bow hunting only.

“I have hunted only with my bow for the past 15 years because I love the challenge of getting a deer close to my stand,” Brashear said. “I hunt with a Matthews Triax bow, use Carbon Express arrows tipped with Rage Tripan broadheads.” 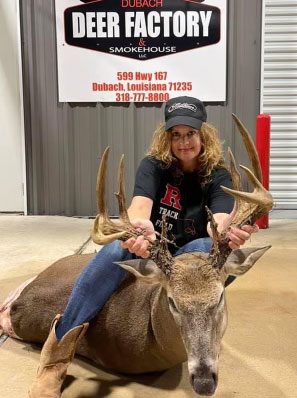 The area she chose to hunt is a prime spot inside a large food plot. Brashear had found trails leading through the area, so she hung her stand 30 yards off a main trail realizing that deer stage in the thicket before coming out on the food plot to feed.

“The weather was warm with daytime temperatures approaching 90 degrees,” she said. “On Oct. 11, I hunted both morning and evening and only saw a few young deer. The next morning was about the same as the warm temperatures kept the deer from really moving.

“I rely on the Moon Guide, which lets me know when wildlife is more likely to be moving. The Guide indicated that the peak times for movement would be afternoons for the next three days, so I was somewhat optimistic as I climbed into my stand that afternoon.”

Squirrel gives hunter a heads up

Sitting in her stand as the afternoon wore on, Brashear watched some does, fawns and small bucks venture out onto the food plot. Then with 15-20 minutes of shooting light left, a squirrel began barking excitedly.

“I have always found that when something disturbs a squirrel like that it is often a mature buck so I began to search the woods, and in a small opening I caught a glimpse of antlers,” she said. “Light was fading fast when the buck stepped into an opening at 25 yards. I released an arrow, knowing I had made a good shot when I heard him crash at 75 yards.”

Brashear went back to camp to give the buck time to expire. Informing friends about her shot, she was offered help but, in her words, “I hate to be a burden to other hunters and felt like I could handle it myself.”

Driving back in an ATV to where she had shot the deer, her flashlight shined on a white belly and she was preparing to use the hoist on the machine to lift the buck and transport it to the camp.

“As I walked around the deer to admire what I had shot, I saw that a goodly portion of one of the hindquarters had been eaten; I assumed that coyotes had beat me to it,” she said. “Then I heard movement in the nearby thicket and realized it was not coyotes; it was a big bear. Here I was by myself in the dark with a big bear nearby, one that was upset because I had interrupted his meal. I waved my arms and shouted and when the bear ran away, it sounded like a big bulldozer crashing through the woods.” 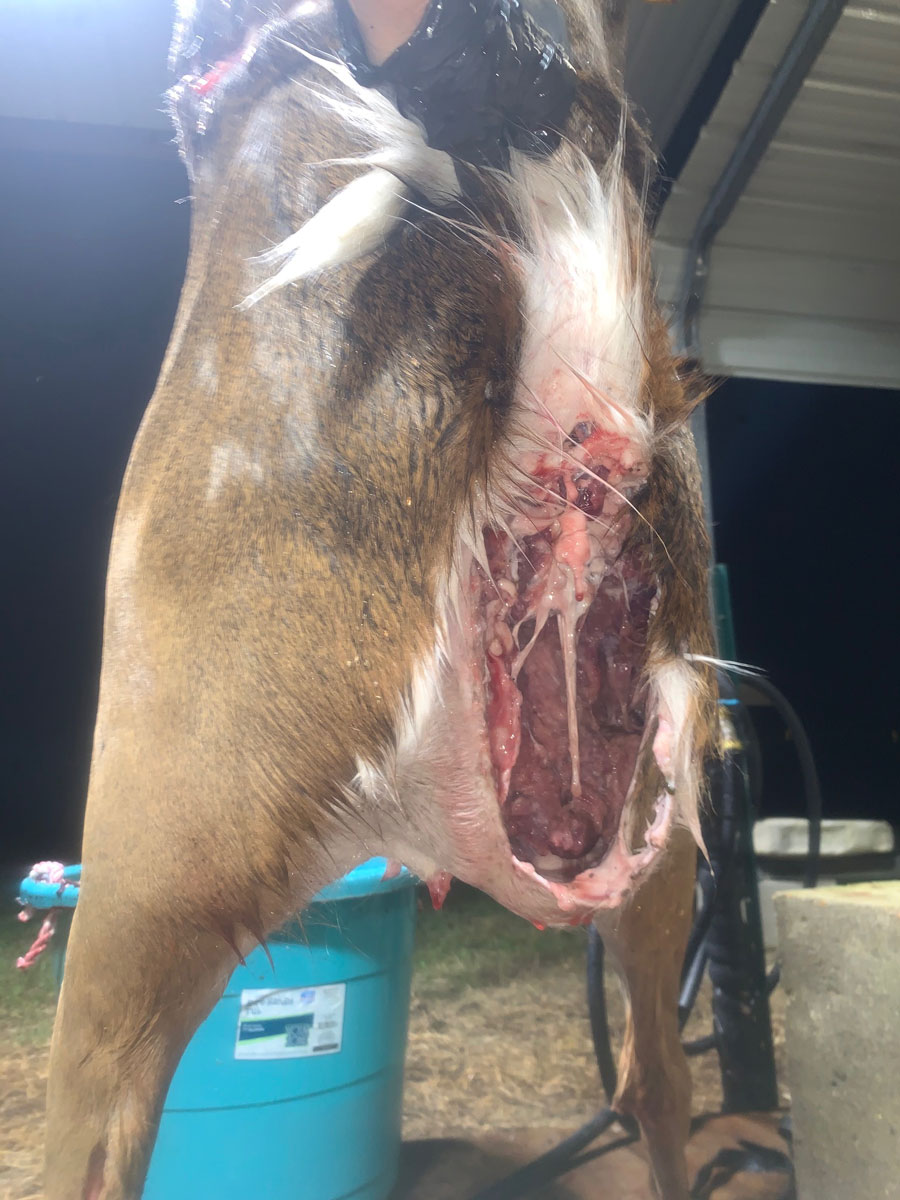 A big job for one person

Brashear was finally able to get the big bodied buck, which weighed 265 pounds, field dressed and in a cooler and she did it all by herself.

“When I got it all done, it was breaking daylight; I worked on the buck all night before finally getting it in the cooler,” she said.

The buck was a main frame 10 point with two kickers giving the rack 12 points total. Inside spread was 15 4/8 inches, bases were huge with mass that carried throughout the rack. The buck, aged at 6-plus years old, was green scored at 145 1/8 inches.

“I made a vow to never hunt alone this late in the day especially in this kind of heat. Obviously,” she said, “I forgot my vow because I was back there hunting alone a week later with temperatures once again quite warm.”