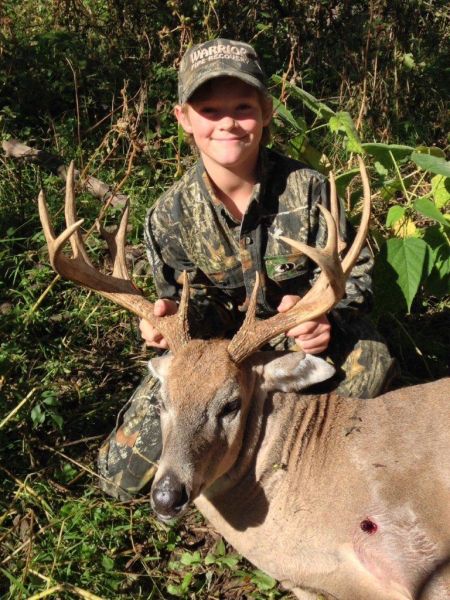 Twelve-year-old Zach Jones has only taken four shots with his Parker Thunderhawk crossbow.

The first three bolts were released on a target, and the fourth smacked into the shoulder of a big 11-point buck.

Hunting on Ashbrook Island, a 6,000-acre private hunting club that bumps up against three states – Louisiana, Arkansas and Mississippi – it is physically located in Washington County, Miss.

“We leave home in Sterlington, get on a barge in southeast Arkansas and wind up on the island in Mississippi,” Zach said.

The youngster and his dad share a policy of only hunting one specific buck over the course of the season, and it’s the only buck they target unless a larger one happens along.

“We had seen this buck on our trail cameras and this is the one we decided we’d hunt this season,” he said.

Zach and his dad, James Jones, got settled into their ground blind before daylight on November 3 in an area where deer had been feeding on native pecans.

“We felt like the buck might possibly show because we’d seen him the day before,” Zach said. “However, he was too far for a shot, so we held off and hoped he’d be in the same area the next day.”

Shortly after daybreak, deer began moving in the area and the first deer the duo saw was a nice 8-point buck that showed up to feed on the pecans. Right behind him was the 11-point they were after.

“The bigger buck chased the 8-point right toward us, and the smaller buck stopped 5 yards from our blind. Right behind him came the one we wanted,” Zach said.

The targeted buck walked behind a tree at 12 steps, and when he moved clear, Zach’s dad gave the go-ahead for the shot.

On impact, the buck stumbled, then bolted and left in a hurry.

“We waited about 15 minutes, got on his trail but when we started getting close, we heard the deer get up and run. We went back to camp and waited to give the deer time to expire,” he said.

After lunch, the pair went back to the area, got on the trail again and after a search that covered some 300 yards, they found the buck that had made its way into a cocklebur patch and died.

The buck was indeed a dandy, a main-frame 10-point with one kicker point and evidence that a couple more points had been broken off, apparently from fighting other bucks.

The deer tipped the scales at 210 pounds and what the beams and individual tines lacked in length was made up in mass that carried throughout the rack. The buck was estimated to be 4 ½ years old, and he green scored 140 7/8 inches.

Incidentally, Zach won the youth division at Simmons Sporting Goods in Bastrop last season with a buck that scored in the 170-inch range.

“It was neat to get that deer last year with my rifle but I may be more excited to have gotten my very first deer with a bow,” Zach said. “Especially with only my fourth shot.”

Read other stories about big bucks killed this season by clicking here.

Sign Up Now
About Glynn Harris 441 Articles
Glynn Harris is a long-time outdoor writer from Ruston. He writes weekly outdoor columns for several north Louisiana newspapers, has magazine credits in a number of state and national magazines and broadcasts four outdoor radio broadcasts each week. He has won more than 50 writing and broadcasting awards during his 47 year career.