Deer hunting for 52-year-old Doug Jones is an all year proposition. He is not a law breaker who hunts all year long, but he works all year in order to keep deer fed as well as keeping up with their activities. Once deer season opens, Jones has a distinct advantage and improves his chances at downing big bucks. His diligence paid off for him on the afternoon of Nov. 2 when he came to terms with a 6-year-old 10-point buck.

“I work for the railroad and I always plan my vacation for the period when the rut begins in Area 3,” Jones said. “I have a camp on my lease in Beauregard Parish and I spend the time staying at the camp and seriously deer hunting.”

Jones hunts on the 2500 acre Bear Head Hunting Club and he concentrates on a 900 acre portion of the club where he has his stands and keeps out feed all year long.

“I feed persimmon-flavored rice bran and a product called Big Bucks,” he said. “I keep feed out throughout the year and keep cameras on the area to keep tabs on what the deer are doing in the area.”

For the past four years, Jones has been getting photos of a variety of bucks, while one in particular has captivated his attention. It’s a buck Jones calls “Junior.” 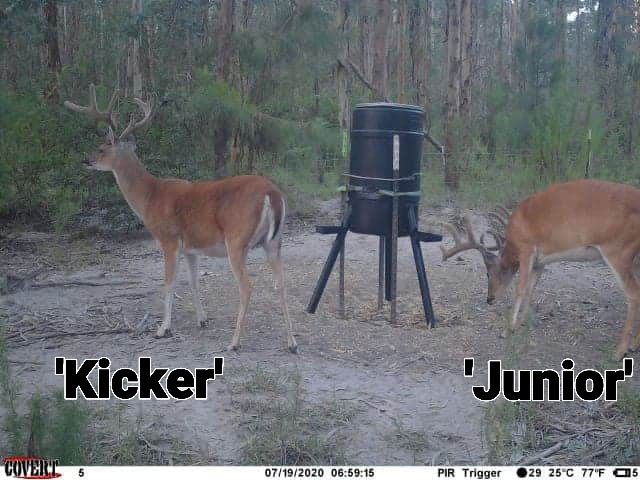 “I started getting this buck’s pictures and knew he had potential to be a real trophy, so I’ve watched him and kept up with him for the past four years,” he said.

Jones has access to box stands around the lease but his preference is to hunt from ground blinds, believing it gives him an advantage at being more at eye-level with the deer. On the afternoon of Nov. 2, he crawled into a ground blind around 4:00, a blind that over-looked food plots and a feeder.

“Not long after getting into my blind, two does came to the feeder and began feeding,” Jones said. “I just watched them because I don’t shoot does in this area; I’m only after ‘horns.’

In a moment a spike appeared from the woods and came to feed. After a few minutes, he continued on off the food plot.

“The next visitors to the feed were a group of four does that were bunched up and were acting somewhat nervous,” Jones said. “I have studied deer behavior for a long time and when I saw them together and acting strange, I knew that a big buck had probably herded them up together now that the rut was kicking in and would likely make an appearance shortly. Then Junior stepped out.

“The big buck came out of the woods, looked down the lane and started walking toward the does. At 125 yards, he stopped and turned broadside and I hit the trigger on my Ruger .308 and he dropped in his tracks.”

The buck estimated to be 6 ½ years old sported a symmetrical rack of 10 points with one small sticker too short to measure. Inside spread was 19 1/8 inches wide, the tines were all lengthy and circumference at the base of each antler was impressive and ran throughout the rack. Taking the buck to K&K Taxidermy in Reeves, the rack was green scored at 156 6/8.