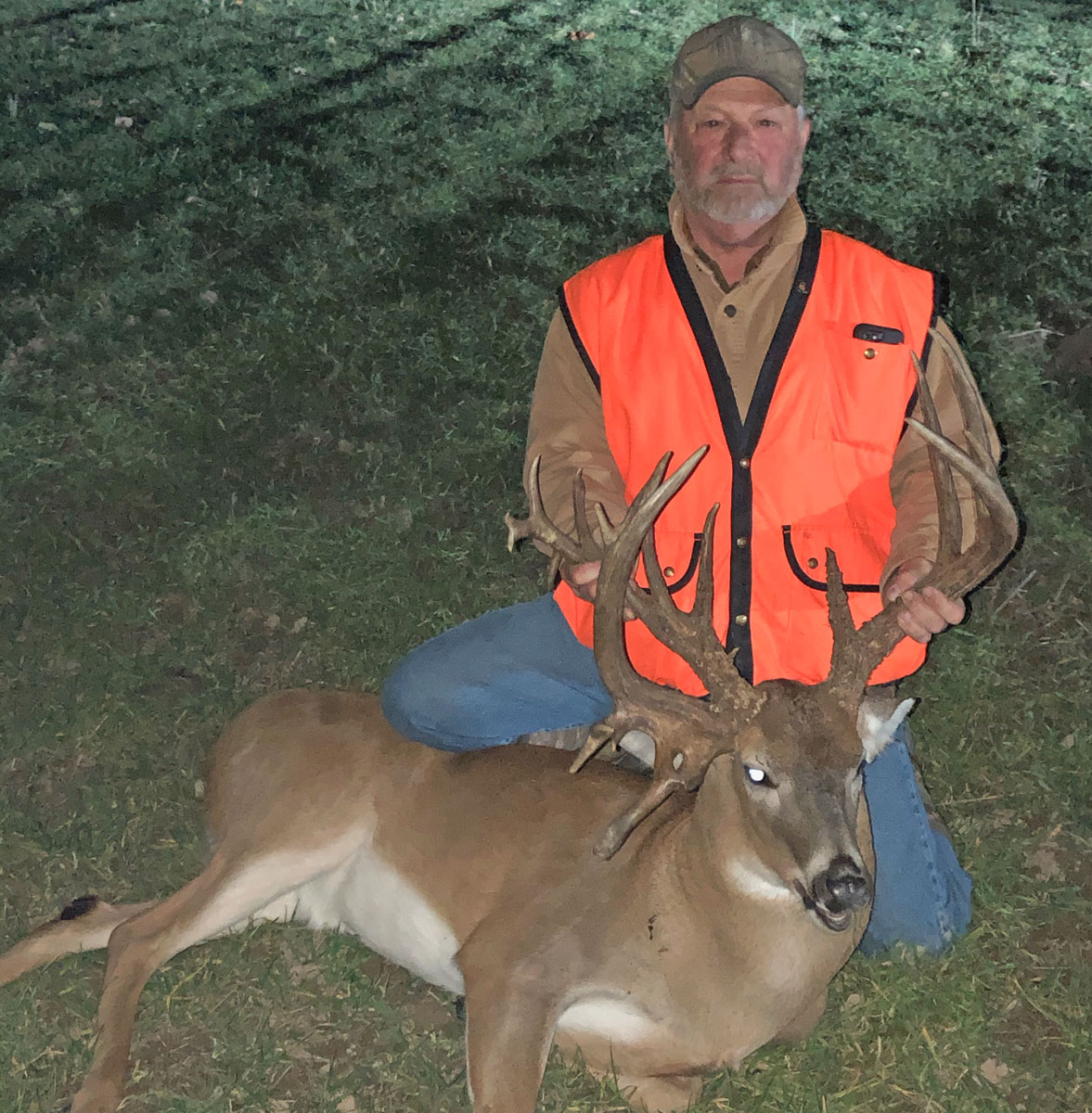 On Dec. 11, Robin Prince of Labadieville, La., went to his deer stand in Humphreys County in the Mississippi Delta with the intent of killing a doe.

“That was the plan; I was going to take a doe,” said Prince, 69. “And after a couple of hours of seeing nothing, a doe finally walked out into the far corner of the food plot about 125 yards away.

“But I looked around and thought I had a good bit of sunshine left, and I said, ‘No, I’m not going to shoot her just yet. This looks too right, too good.’ I decided I was going to wait and see what happened.”

In the history of deer hunting, few people have ever made a more fortunate decision. Moments later, Prince was squeezing the trigger on one of the biggest and oddest bucks ever taken in Mississippi — gross scoring 215 7/8 inches as a 24-point. If it holds that score for 60 days, it will be the 13th biggest non-typical listed in Magnolia Records.

“It wasn’t but a minute or two later, a buck walked out on the same trail and was following that doe,” Prince said. “I had never seen this buck before, but one look in the corner of the field, I could tell he was a shooter, and we don’t shoot anything less than 140 inches up there. We’re on a good management plan.

“I could see his left side and could tell through the scope he had five points, and it was impressive. Then he turned and when I saw what was going on (the right side), I didn’t need to see anything else. I didn’t bother picking up the binoculars. I didn’t need them. I said to myself, ‘You just need to get him in the scope and shoot.’”

Which he did, with his new 6.5 PRC Begara rifle and Swarovski Z8i scope.

“I put it right on the base of his neck and squeezed the trigger, and he went right down, I mean right down,” Prince said. “He didn’t even turn his head. When he went down it was like he was still looking straight ahead. The wind was blowing pretty good, and it was blowing his tail, and I thought he might get up. I tried to chamber another round but honestly, I was shaking too bad and was so nervous I couldn’t have made another shot.”

Instead of going to the buck, Prince climbed down and walked the quarter-mile back to his side-by-side buggy and went to get his wife, Arlene, from her stand a few hundred yards away.

“I didn’t want to take any chances,” he said. “I thought he was done, but I wanted to be sure. I didn’t want to go walking over there and him jump up and start running.”

Upon returning, the Princes discovered this remarkable beast.

“I fell to my knees and started thanking Jesus for sending me this buck,” Prince said. “I’d have never thought I’d see or a chance to kill a deer like that. It was a remarkable day that I will never forget. I couldn’t thank Jesus enough.”

Prince, whose previous best buck was a 120-inch, 10-pointer from the Louisiana marsh where it was a trophy, said the decision to not shoot the doe was based on what he’d seen in the previous few hunts.

“We’d been seeing a lot of smaller bucks, younger bucks pushing does, but none of the big ones we had been getting on camera were involved,” he said. “We had several cameras out all fall and have a lot of deer pictures, but not a single one of this buck. We never knew he was there. Me and some friends lease the 250 acres from the family of one of the friends, and we’ve been there three years and are managing it. We’re trying to do it right. But we had no idea this guy was around. Turns out, one of our neighbors told one of our guys that he had one photo of the deer. That’s it.”

Prince said his lease is mostly in CRP hardwoods, and lots younger than the surrounding landowners who are also mostly CRP.

“Ours is so much younger and thicker, I mean, so thick you can’t walk through it unless you’re on a trail,” he said. “We are their bedding area. That’s why he was there.”

And, probably why nobody had ever seen him.

“The area I was hunting, there wasn’t any kind of rubs or scrapes that would make you think there was a big buck around,” Prince said. “But I knew does would be hitting that food plot, and I was hunting a doe. This doe was the only one that came out, and she brought this buck to me. He wasn’t really pushing her hard, just following her from behind. She just fed across the field and had covered about half of it before he stepped out a couple of minutes or later.

“In recent weeks, we had seen a lot of the younger, smaller bucks following and even pushing the does. That’s one of the reasons I hesitated on shooting the doe. I knew there was a chance.”

The buck’s antlers are incredible and dang near indescribable. He is a main-frame 5 on the left, but a wonderfully disfigured 19 on the right with what can best be described as a double main beam that comes out of the base.

“One antler, the one scored as the main beam by the scorer at the Simmons Sporting Goods Big Buck Contest, goes straight up and branches out,” Prince said. “The other goes straight out to the right and has three drop tines, and one of those drop tines has two more drop tines. The beam that goes up has a lot of other stuff happening, too.”

Prince said the inside spread was about 19 inches but wasn’t sure where it was measured.

His buck is as non-typical as non-typical gets, and one that likely will require a good deal of thought when officially scored by a Boone & Crockett judge. Which is the main beam on the right? Where would the massive right base measurement be taken?

“It’s a weird rack for sure,” he said. “I’d have never thought I’d ever get a chance at a deer like that. I still can’t believe it.”