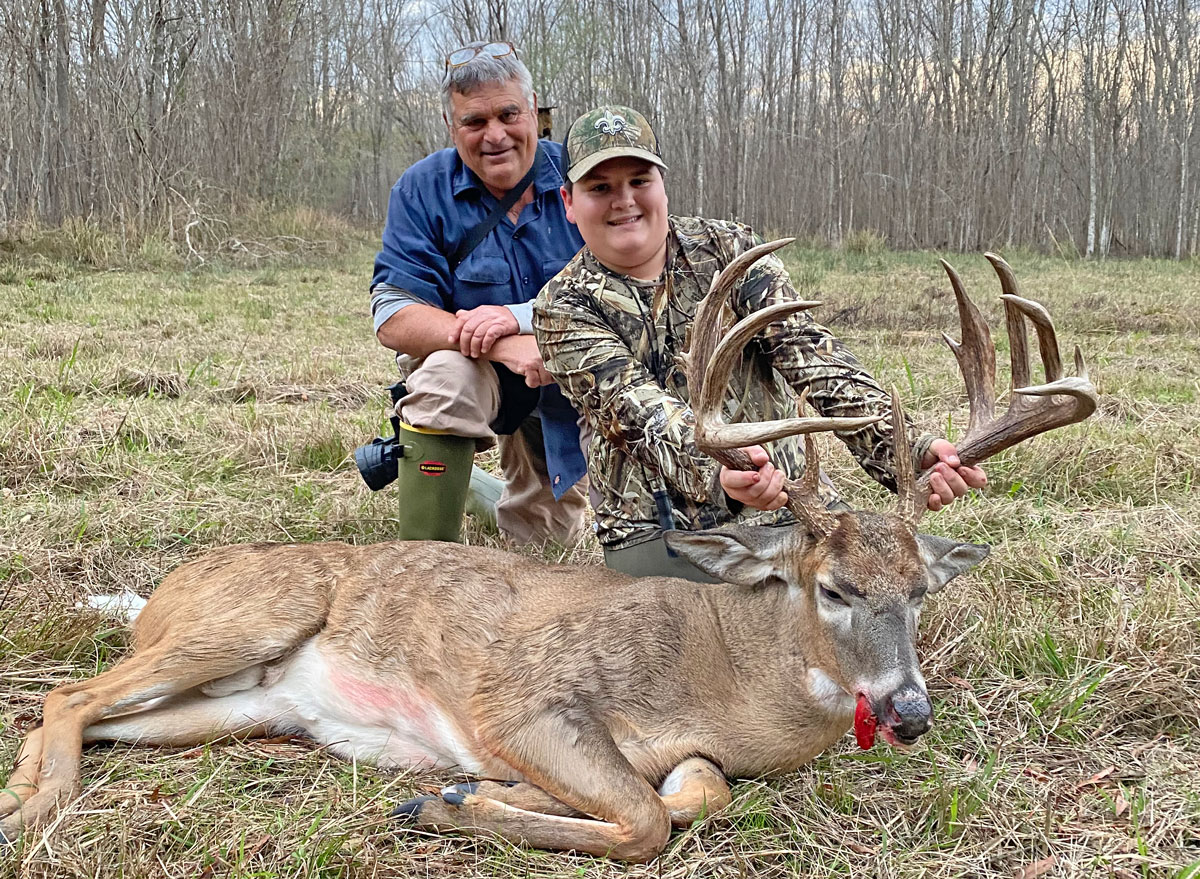 Graham Newton is a seventh grader at Saint Anthony of Padua Catholic School in Bunkie. He is a die-hard LSU sports fan and enjoys playing football, baseball and basketball.

Graham was nicknamed Knuck by his grandfather, Knocker. He also has a love for hunting and fishing. During the summers the two, along with Graham’s younger siblings and cousins, enjoy spending weekends at Southern Comfort in Dulac, La., at Knocker and Big Mama’s fishing camp. But when the weather cools off, Knuck trades in his fishing poles for shotguns and rifles. One of his all time favorites is squirrel hunting with a 22 rifle.

“My dad says it’s one of the best ways to target practice while hunting,” Knuck said.

All that practice paid off for Graham when he would be given the opportunity of a lifetime.

Knuck also deer hunts with his family on 200 acres of private land in Avoyelles Parish, much of which is in the Conservation Reserve Program. Their season started slowly, only seeing target bucks on trail cameras during nighttime hours. The main shooter, named “Boogar,” was taken by one of the neighbors on Dec. 26, so Knuck was already looking forward to next season.

But the club members got a New Year’s surprise that would shake up the season and give everyone some encouragement as the rut was just kicking off. They captured a new deer on camera that was the biggest buck to ever step foot on this property. They named him “Macho Man.”

“I told dad, I’m not going back to school until that deer is dead,” Knuck said. The weather didn’t cooperate. He hunted the next few days without any sign of “Macho Man.” Knuck had to go back to school, which was hard since his Uncle Donnie spotted the big one on camera twice at 9 a.m. and at 4 p.m. He wanted to go to school late, but his parents said no.

What Knuck didn’t know was that Knocker was checking him out of school that next day to bring him hunting. Knocker and Knuck eventually made their way to one of their favorite box stands. Graham decided to spice things up with a loud mature grunt.

“I grunted with my Extinguisher grunt call around 4 p.m. and right after, I heard something walking through the bushes not far from the stand. I really thought it was a raccoon or something but all of a sudden I saw rack. I grabbed my gun and told Knocker it’s him, I know it’s him. “Macho Man” is right there. I got my gun out the window as fast as I could and waited for him to come out of the bushes. The deer’s horns kept getting tangled in the branches. At 4:20 he finally came out into an open square about 35-40 yards in front of the stand and was walking away quartered with his nose on the ground. I kept my crosshairs on him the whole time and asked Knocker, ‘now?’ He said, ‘wait Knuck….'”

When Knocker said “now,” he didn’t even get the “w” out in the word and Knuck had pulled the trigger. The deer jumped up, kicked, and ran in the trees. 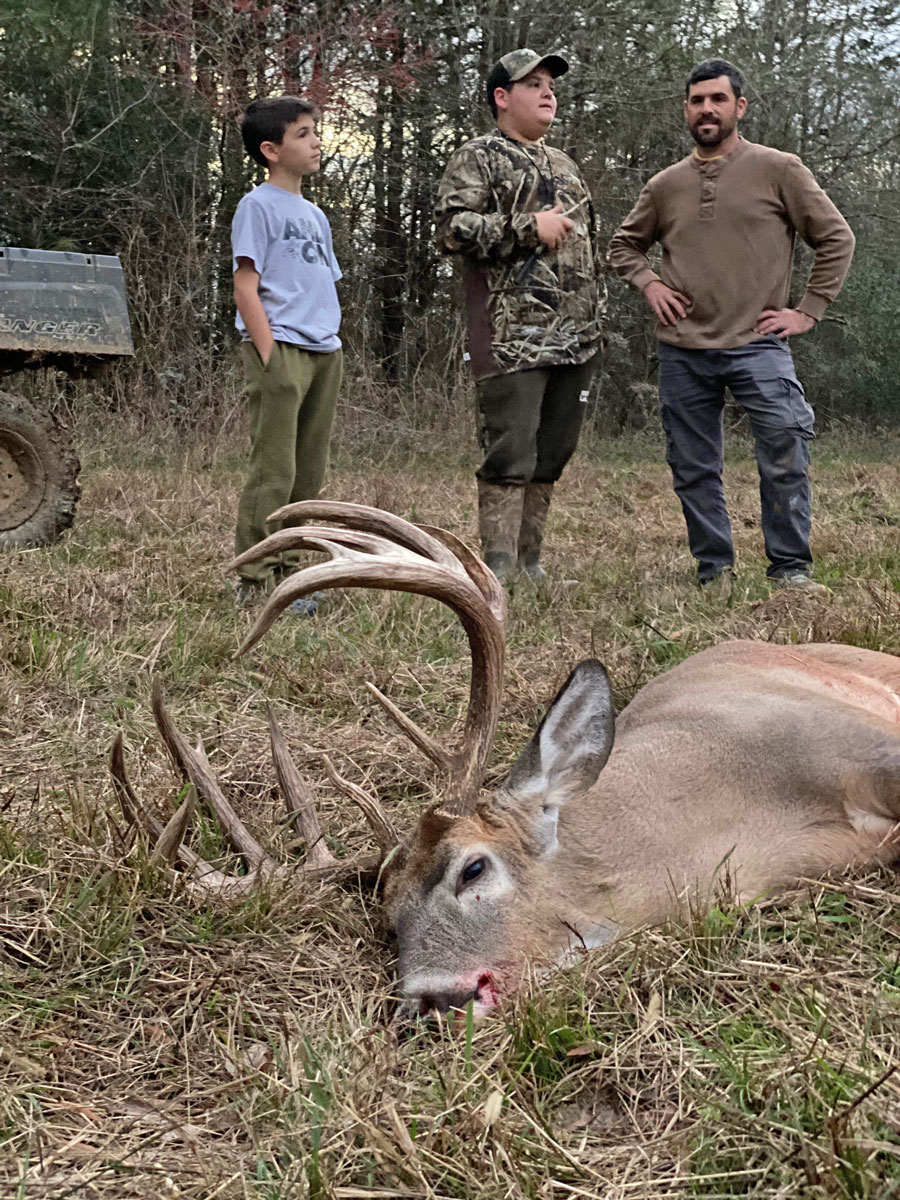 A bucket of ants

“Knuck was as cool as a cucumber before the shot but after, it looked like I poured a bucket of ants on him,” Knocker said.

The two climbed down. His Uncle Paul came to help look and even though he spotted the downed deer, he waited to let Graham find it for himself. He did. Soon after walking a few yards in the direction he last saw the deer, Graham saw “Macho Man” lying motionless on the ground and knew he had killed the biggest buck of his life.

The deer weighed 190 pounds and Louisiana Department of Wildlife and Fisheries Deer Program Manager Johnathan Bordelon officially scored the trophy buck. He had a total of 14 scorable points, an inside spread of 16 1/2 inches, a long main beam 24 1/8 inches and scored a massive 182 4/8 inches.

One characteristic that stands out on this impressive set of antlers is the mass of every tine. He’s thick from start to finish.

I always tell my boys to squeeze slowly and let the gun surprise you, but I know Graham was surprised the second he laid eyes on that deer! I can’t say enough how proud and happy I am for him. To say we expect to hunt a deer like this every year would be unrealistic but it sure has been fun. I’ve told Graham so many times, you and Knocker have the ultimate trophy, the memory of being together for this awesome experience. You are so blessed.

Macho Man was entered in the big buck contest at Simmons Sporting Goods in Bastrop as well as Southern Boyz Outdoors in Hammond.