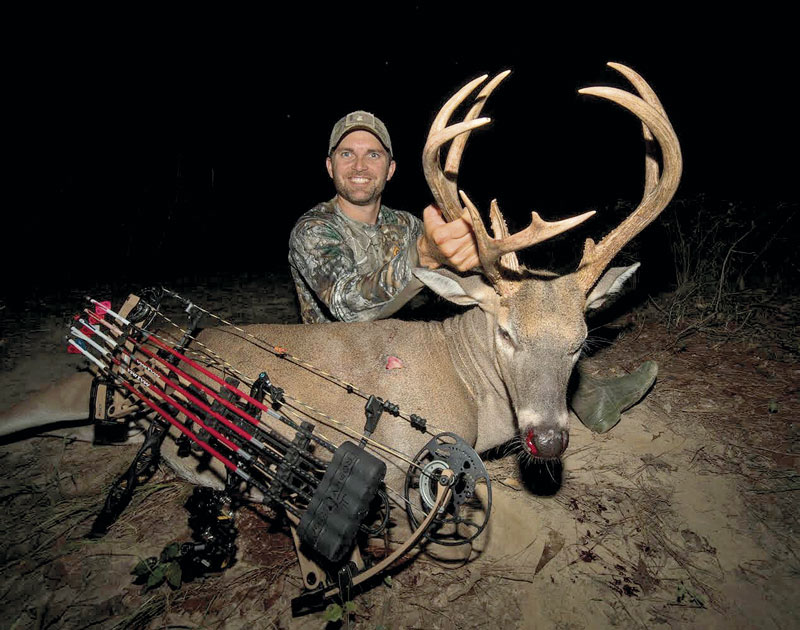 Between the early season and the onset of the rut, deer become harder to predict, especially big bucks. Here are some tips from an expert hunter on avoiding the ‘November lull.’

Hunting white-tailed deer, especially trophy bucks, is never easy. That being said, perhaps the most-difficult time to hunt them is during the transition between the early season and the onset of the rut. In the Midwest, it’s often referred to as the ”October lull,” but across much of Louisiana and Mississippi, this transition period is in November.

In order to formulate a successful hunting strategy during this difficult time, it helps to understand what’s going on in a whitetail’s world. The shortening of days has caused bucks to shed their velvet and disperse from their bachelor groups of summer and early fall. These changes are naturally accompanied by a shift in home range for many bucks, as well as a change to more nocturnal movement.

Hunting pressure in many areas has also begun to affect deer, further changing their routines and making it even more difficult to predict their movements. They are still focused largely on food sources, as they feed heavily to bulk up for the upcoming rut and winter, but these food sources are changing rapidly because acorns are falling.

Although this makes it difficult to pattern deer, by no means is it impossible. You just have to adapt your tactics. One hunter who understands is Slade Priest of Centreville, Miss., a veteran host of outdoors television shows and a licensed realtor who sells plenty of hunting properties for Realtree United Country Southern States Realty.

Priest has learned what it takes to be successful during this frustrating period of deer season. Although he exclusively bowhunts, his tactics can be applied to gun hunting as well.

He said he does things differently when hunting public land, where baiting is not allowed, and private land, where deer can be fed supplementally.

For the public-land hunter, Priest said nothing replaces what he calls “butt time” — time spent in a stand in the woods. When hunting public land, many factors are beyond a hunter’s control, especially hunting pressure.  This makes it much more difficult to pattern deer and predict when they will move. The public-land hunter needs to spend every possible moment in the woods to increase the chance of being there when a buck is on his feet during daylight hours.

With so many people on public lands, a hunter can bump a buck from his bed at any time, causing him to wander past your stand and offer a shot opportunity. Priest also stressed the need to take care of smaller details, including scent control — scent-free soaps and odor killers — both before and during the hunt —and playing the wind.

Hunters not hunting over bait, especially on public land, should rely on information they can gather and past history, if they have any.  With deer focused heavily on mast, particularly acorns, food sources change rapidly during November.

“Red oak acorns are often gone by now, and the deer have shifted their focus to white oak and water oak acorns,” he said, noting that nothing replaces “boots on the ground” when it comes to finding the oak tree favored by deer that day. If you are fortunate enough to be hunting a piece of land where you have past experience, you can use it to shorten the learning curve by knowing which mast trees often produce and which are usually favored by local deer.  Nothing beats finding a “hot tree” with lots of fresh droppings and the leaves “powdered underneath it.”

Priest said to maintain scent-control discipline and minimize noise while scouting to avoid spooking deer and changing their patterns. He also advised to “hunt from the outside in” meaning to hunt from the edge of an oak flat first — observing which trees the deer favor — only then moving your stand in for the kill.

“This way you avoid tipping your hand and spooking deer unnecessarily,” he said.

According to Priest, the private-land hunter should do just the opposite, minimizing his or her time on stand and limiting it to the time when they feel they have the best opportunity to be successful, especially if hunting over bait or a food plot.

“Hunt smart, not hard,” he said. “I always say it only takes one day to kill him or one day to spook him. Limit your stand sits to times when you feel the buck you are hunting will be on his feet feeding. Other than that, you are just educating him and making him nearly impossible to kill.

“The passing of a big, November cold front is a prime time to hunt, because the rapidly rising barometer and the cooler temperatures often get bucks on their feet during shooting hours. You might only get one opportunity at a mature buck, and if you spook him, it’s over until the rut. The best time to kill a big buck is the first sit in a stand. If you just have to get in the woods any other time, hunt somewhere else for a doe; don’t cost yourself a future chance at a trophy by forcing the issue.

“Almost everyone is using scouting cameras and hunting apps these days; use them to your advantage. You can bet if you see me headed to the woods with a bow in my hand during November in southwest Mississippi or Louisiana, that I have a big buck on camera during daylight hours or I have a huge hunch that he will move.”

Regardless of where and how you hunt, Priest stressed the need to minimize hunting pressure in order to be successful on big bucks.

“It all goes back to the offseason preparations you have made,” he said.  “You can’t show up the week before the season and start cutting shooting lanes and not expect the deer to notice and change their patterns accordingly. Deer are creatures of habit, and there are only a few things that these habits revolve around: food, water, weather, and hunting pressure. Hunting pressure is one thing that can often be controlled.”

Priest has lately become a huge fan of bowhunting from box blinds.

“These boxes really help to minimize your exposure and therefore, the hunting pressure that you apply,” he said. “I don’t think you can ever be 100% scent-free, but if you follow a scent-free routine, use an ozone generator and hunt from a box blind, paying attention to the wind and only opening one window, you can get close. If you can access and exit the stand without spooking deer, every day is like opening day all over again.”

“I have the box blind positioned where I can easily access the stand without spooking any deer,” he said. “The nearby feeder goes off at 4 p.m., bringing deer close to the stand, but by dark, they have usually fed to the other end of this large food plot. That way, I can exit the stand undetected.

“(Also), we have a lot of wild hogs in the area I hunt, and I have a hog sound app on my cell phone. Deer often avoid hogs, and by playing hog noises, I can usually get them to leave. Then, I climb down and make noise like a sounder (group) of hogs rooting around. This eases the deer off without panicking them.”

Priest also said a “drive-by” — having someone drive past or up to the field — is huge and is much better than climbing down in front of deer at a food source.

Although November can be a trying time when it comes to white-tailed deer hunting in much of the south, it is possible to have success.  Attention to small details, patience, prior knowledge, and hard work all are keys to a successful outcome this month.

About Sammy Romano 55 Articles
Sammy Romano is a lifelong hunter who has worked in the archery industry for more than 24 years. His expertise includes compounds and crossbows.