Shawn Hall and his wife have two daughters, Kaylee and Kayslyn, who have a few things in common. They both attend school in Many; both are attractive young ladies; both own their own deer rifles and both took trophy bucks this season.

Here’s a bit of background information. The family hunts on 200 acres of family land around Marthaville in Natchitoches Parish. The sisters have had plenty of exposure to hunting as their father and grandfather and other family members enjoy deer hunting on the property. Each sister has her own rifle, matching .243 Browning A-bolt short mags.

On the afternoon of Oct. 11, Kayslyn, 13, took advantage of youth season and was joined by her grandfather, Danny Hall, in a box stand on the property.

Shawn Hall, Kayslyn’s dad, shares what happened that afternoon when a buck appeared, disappeared and finally appeared again giving her a crack at him.

“As she sat on the stand with my dad that evening, a big 10-point buck walked out into the clearing at about 50 yards but went back in the thicket before she could get a shot,” Hall said.

Soon thereafter, a doe stepped out of the thicket, turned and went back into the woods. Moments later, the 10-point buck came out where the doe had departed but returned to the woods giving the obviously nervous 13-year-old the serious jitters.

“Ten minutes later, the buck appeared again and stood directly facing Kayslyn for at least five minutes,” Hall said. “He walked back into the woods but reappeared several minutes later at 200 yards. He was casually crossing the clearing she was watching but just before he left the clearing to enter the thicket, he paused just long enough for her to get a bead on him and make a perfect shot behind the shoulder and he ran maybe 50 yards before piling up.” 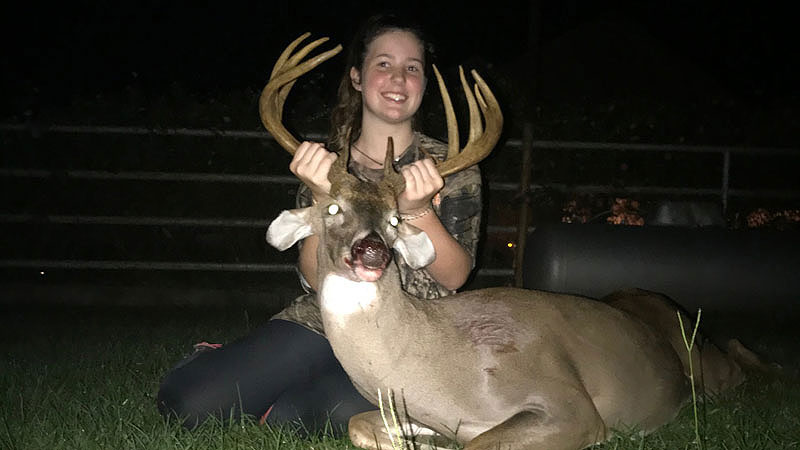 The buck sported 10 points with a 16-inch inside spread, 5-inch bases with over 4 inches between the G2 and G3. The buck was judged to be 3 ½ years old and was measured at some 140 inches of antler.

Next, it’s big sister, 17-year-old Kaylee’s turn. The date of this high school senior’s good fortune with a big buck on the property was Nov. 5.

“Since the biggest buck Kaylee ever got was an 8-point, she was out for revenge to at least match her little sister’s 10-point,” Hall said. “We had a nice 13-point on camera and this is the buck she was targeting.”

Kaylee wanted to hunt a different stand from the one her dad suggested she hunt because trail cam photos had shown the buck hanging out in the area. She finally relented and followed her dad’s suggestions, climbing into a box stand situated along a pipeline right of way.

“She had hunted this buck all week without success and on this afternoon, she crawled on the 4-wheeler and drove herself to the stand I suggested,” Hall said. “Parking the bike, getting situated in the stand with her equipment, she was still in the process of getting ready when five minutes after she got in the stand, she looked up and there was the buck she was after standing broadside on the pipeline at 100 yards.

“Grabbing her gun and resting it on the window, she tried to settle her nerves. After a few seconds she was able to gather her composure enough to put the crosshairs on the buck, hit the trigger and he dropped on the spot.” 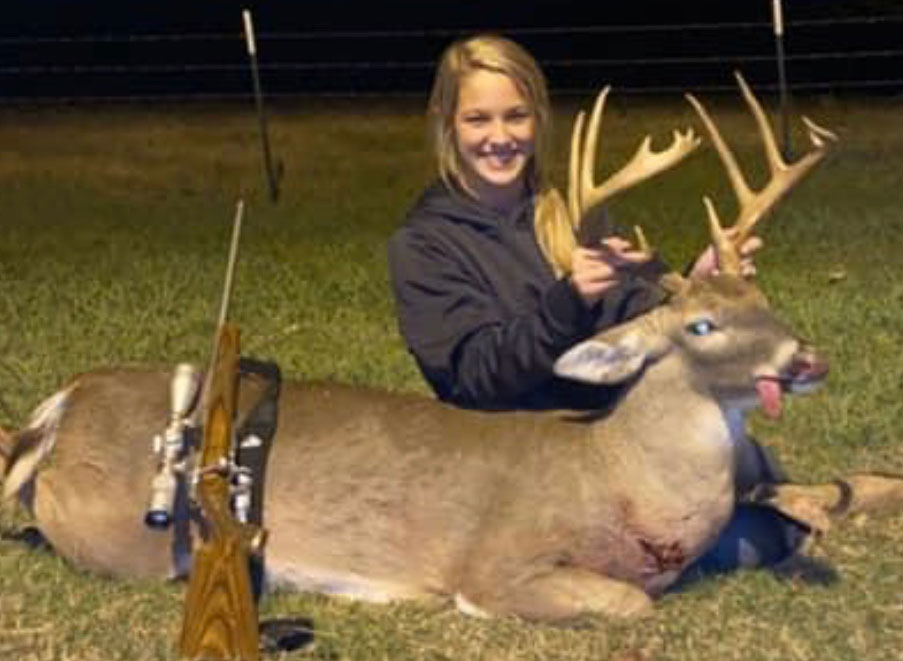 The buck, a main-frame 10 point, carried 13 points with some palmation on one beam, had bases of 4 inches each with an inside spread of 15 ½ inches and 20 ½ inch main beams. The buck was 3 ½ years old and weighed 180 pounds. The rough score on the rack was just over 140 inches.

Sisters support each other

Although there had to be some sibling rivalry between the sisters, according to their dad they were both proud of what the other had accomplished. I suppose a combined 280 inches of antler between the two sisters might have something to do with that.

Sign Up Now
About Glynn Harris 406 Articles
Glynn Harris is a long-time outdoor writer from Ruston. He writes weekly outdoor columns for several north Louisiana newspapers, has magazine credits in a number of state and national magazines and broadcasts four outdoor radio broadcasts each week. He has won more than 50 writing and broadcasting awards during his 47 year career.