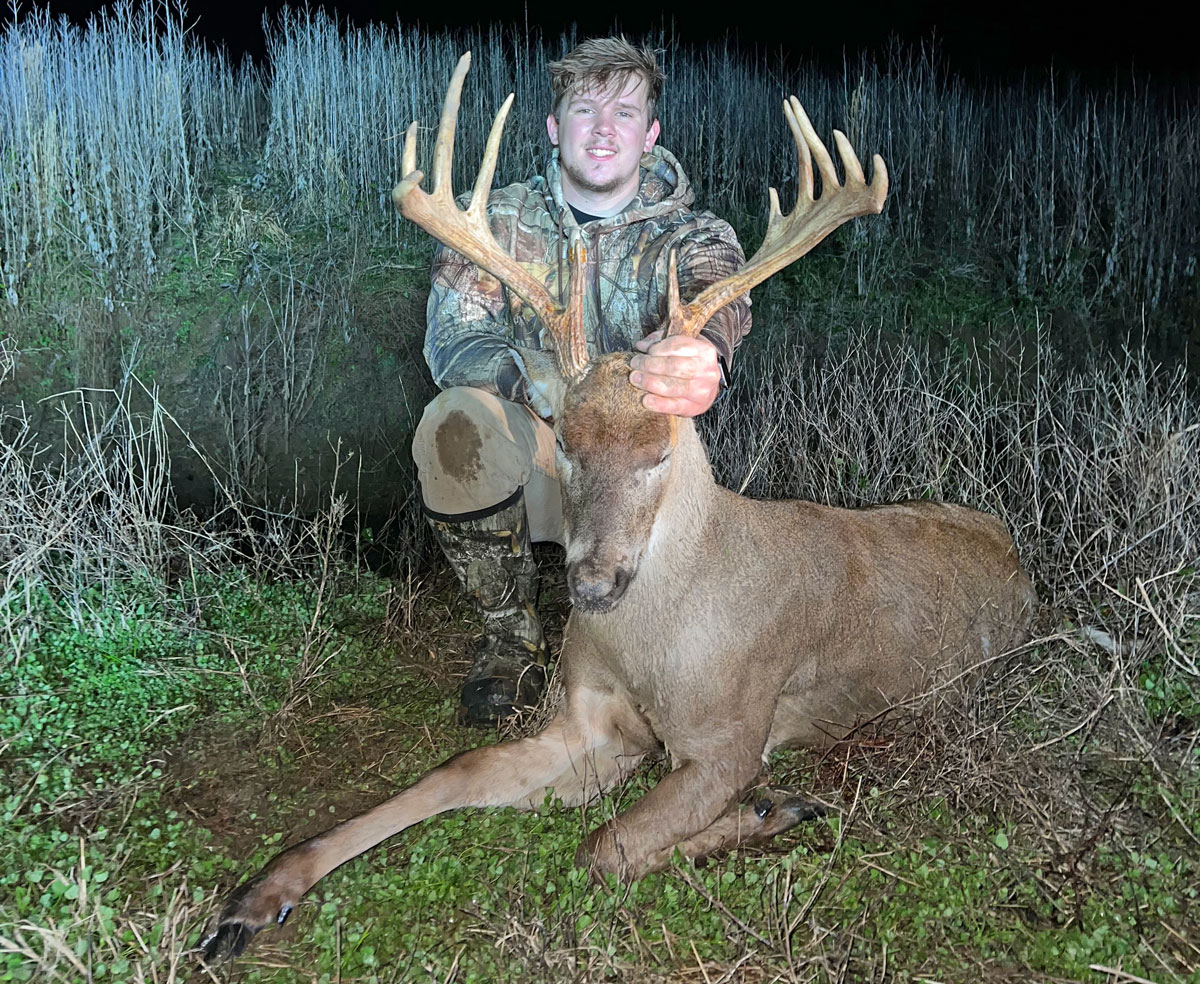 Hunters know all too well the roller coaster of emotions that come with pursuing a single animal. In fact, it’s easy to become obsessed when the animal happens to be a mature whitetail buck. For 21-year-old Davis Oates of Pineville, one buck in particular had punched the young hunter’s ticket on that roller coaster.

Early in the season, Oates had identified a mature buck on some private farm ground in Natchitoches Parish that he and his family hunt.

“I had several pictures of a really nice buck early on, but my brother killed that deer,” Oates said.

Fortunately, the heartbreak didn’t last long, when yet another, even larger buck showed up in front of one of his trail cameras.

And this is where the coaster ride really begins.

Over a period of 45 days, Oates would pursue the buck all but three without making eye contact with the deer. To make matters worse, the three days he failed to hunt, the buck made appearances on camera, only a few yards from his stand. Now fully obsessed, and with Christmas approaching, Oates made a tough decision to miss the annual family get together which takes place a few days prior to Christmas.

When Oates shared the news with his father, he was told to be sure and make his mother aware of his plans. Oates was happily surprised when his mother told him, “you better kill that deer if you’re going to miss Christmas with your family.”

But there would be no Christmas miracle, as the big deer failed to show.

A change in tactics

By now, Oates was beginning to question his approach to hunting the buck.

He began driving his ATV in to a certain spot, then riding his electric bike closer before walking the final stretch, trying to not spook the deer.

By now Oates had spent hundreds of hours in pursuit of the buck, and was yet to lay eyes on him while on his stand. On Dec. 21, that was all about to change.

Oates was able to get off work early, and even though it was pouring rain, he headed straight to his stand in hopes the rain would slack off before dark.

“I sat for a long time without seeing a single deer, but eventually a deer stepped out at over 400 yards,” he said.

Oates knew it was the buck, even without his binoculars. He could tell by the size of his body, even at that distance.  Slowly, the buck began to make his way towards the food plot Oates’ stand overlooks.

“I knew at the pace he was moving, it was going to be close to the end of legal shooting hours by the time he made it to a distance I was comfortable with,” he said.

While Oates said a quick prayer, three more bucks stepped into the food plot, prompting the big whitetail to move a little closer. For over an hour, Oates watched, fighting off the shakes and hoping the buck would come closer. Eventually, the deer would come to a distance Oates was comfortable taking a shot.

The 30-06 rifle Oates was about to take his shot of a lifetime with is a family heirloom, passed down through several generations.

“That gun has survived two house fires but still gets the job done,” he said. “My grandpa had told me it was all I needed to kill deer with.”

Oates got set and pulled the trigger. At the shot, the buck would wheel, making a large circle in the field before exiting into a small patch of woods. Oates would shoot three more times at the fleeing buck but didn’t feel particularly good about any of the shots he took at the fleeing deer.

He walked to exactly where the buck stood, but couldn’t find blood or hair. He began tracking with no luck, then called for help. Scott and Brandy Lewis own Gator, a blood trailing dog with quite a reputation. Scott was working, but Brandy brought Gator out.

“I’d never been around a tracking dog before, and honestly I was pretty nervous when Gator starting running in the opposite direction of where the buck ran, he said.”

But Gator knew exactly what he was doing, and in a few short minutes he was headed in the direction the buck had run.

“We were tracking Gator on Brandy’s Garmin and all of a sudden she said, ‘I think he’s found your deer.’” Sure enough, Gator had done his job and Davis Oates had killed the largest whitetail of his young hunting career.

The deer scored 149 2/8 and Oates had finally gotten off the roller coaster.