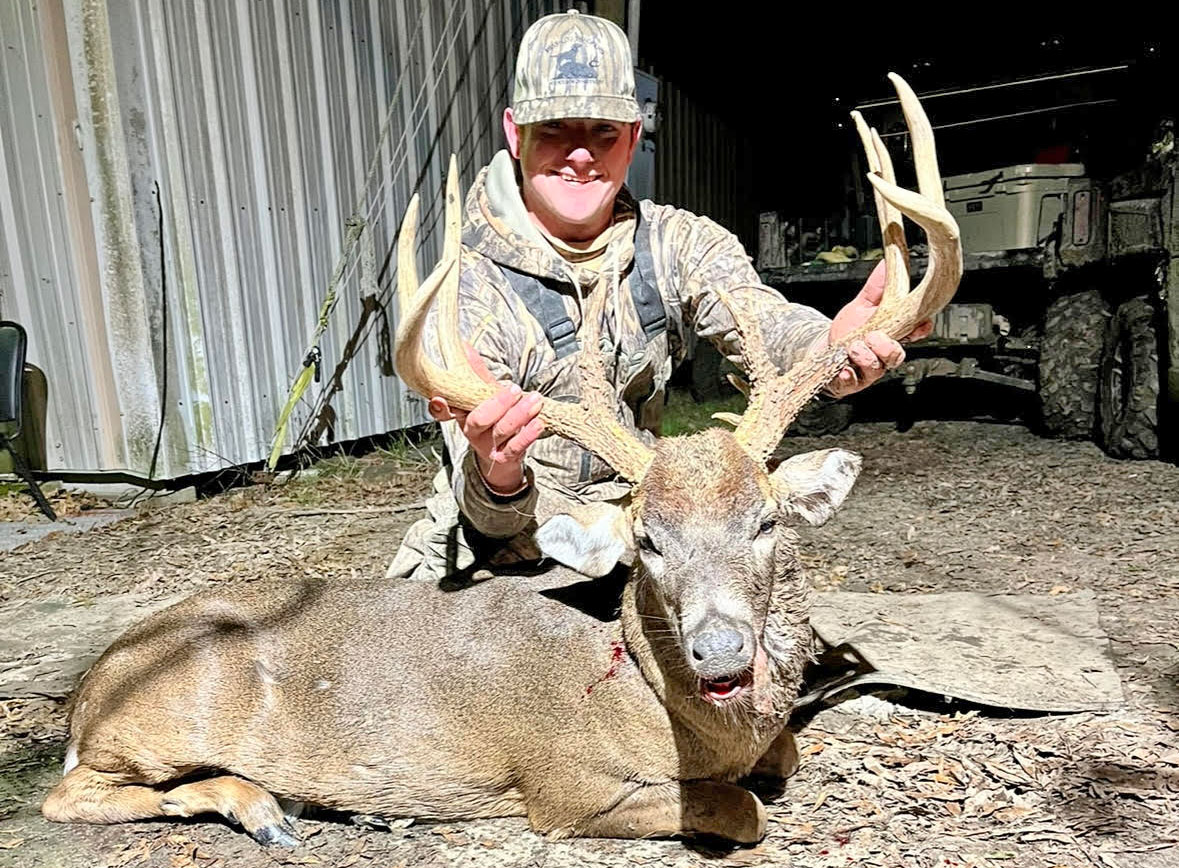 Sean Habetz, 28, a plant worker who lives in Ragley, had the surprise of his life when he went to check on the buck he had just shot. The buck, an 11-point with a score of over 158 inches, had never shown up on trail cameras and no member of the club had ever seen him.

Habetz hunts on property his grandfather purchased in 1978, a 680 acre tract in Concordia Parish that butts up to the Cocodrie National Wildlife Refuge near Monterey. The land was farmland until 2000 when it was placed in CRP.

On the morning of Saturday, Jan. 14, Habetz and other club members had hunted the property.

“I saw some does and small bucks and other club members had about the same success, except for on member who downed a nice 7-point buck,” Habetz said.

After the morning hunt concluded around 10:00, Habetz went back to the camp for lunch and was back on his stand around 3:30.

The stand, a box stand, overlooks a low-lying area and is subject to flooding during winter.

“By the end of December, I’m usually looking at 300 yards of water,” Habetz said. “That afternoon, I put out some rice bran about 100 yards from my stand. I began seeing a few does and yearlings and I hadn’t seen anything between 5:00 and 5:30 when three does and three yearlings came out and began feeding on the rice bran.”

The stand is next to the property line that adjoins the refuge to the left and Habetz said there is no window on the left side, only out front and to the right.

“I don’t want to be tempted should a deer show up on the refuge so I’m not looking that direction when I’m in the stand,” he said. “I was watching the does and yearlings and noticed that the does seemed really nervous so I put my rifle, a Remington .270 bolt action, on the shooting rail.”

A good buck came out of the refuge and came across the CRP, across the lane and into the brush before turning around and came back toward the does.

“The buck was pushing one doe around and then he turned broadside at 100 yards,” Habetz said. “I had no idea just what he was but knew he was a good buck I wanted to shoot, so I did. When I shot, he hit the ground, spun around and disappeared.”

Habetz waited until the conclusion of shooting time before climbing down, contacted his brother and others telling them what he had shot. His brother, brother-in-law, his fiancé and a friend came riding up on a side-by-side.

“They asked if I wanted to ride down to where I had shot the deer but I decided to walk,” he said. “When they got there they started whooping and yelling as they found the buck that only traveled maybe 5 yards before falling. They shined a light on his rack as I walked up and I couldn’t believe what I was looking at; I had no idea the buck was that big. I became emotional and the tears flowed as I hugged them all.”

A buck to be proud of

The buck sported a main frame 9 point rack with two kickers giving it a total of 11 points. Inside spread was 19 6/8 inches, main beams were over 23 with bases over 5 inches each. The buck was estimated to be at least 6 ½ years old and weighed 205 pounds. Taking the buck to K&K Taxidermy, the rack was green scored at 158 7/8 inches.

“I want to dedicate this buck to my papaw, Bill Habetz, who passed away in 2011 and on whose property I was able to down this magnificent buck,” Habetz said.