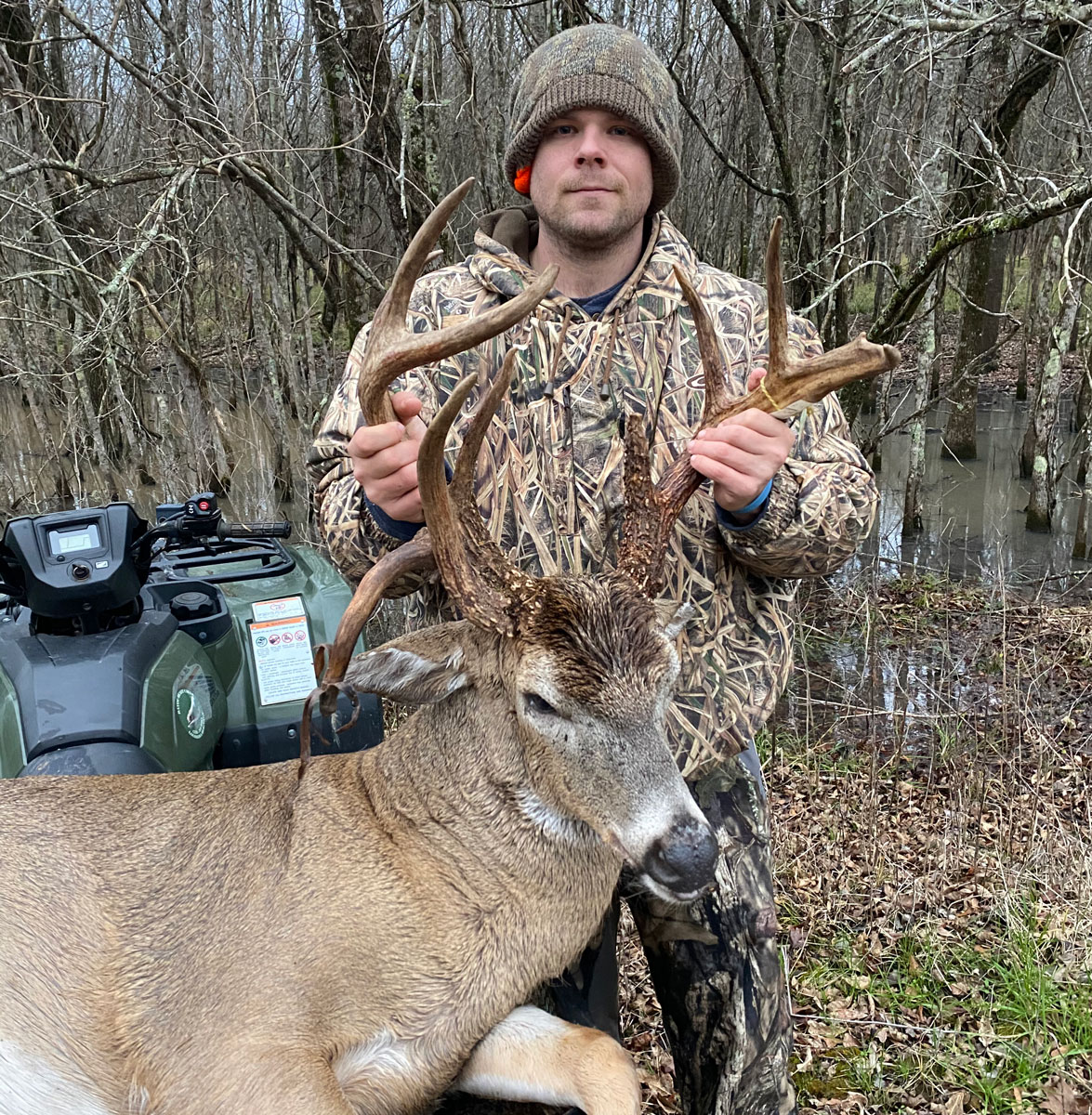 Dale Bordelon sat his son, 13-year-old Hunter, on a deer stand on his property in Avoyelles Parish in 2005, Hunter did what his dad hoped he’d do. A big buck walked out at 372 yards and Hunter shot him.

The buck was taken to TP Outdoors sporting goods store in West Monroe to be entered in that store’s big buck contest. After some 250 entries were judged, Hunter walked away with first place prize, a free mount of his 175 5/8-inch 14-point buck, a deer mount that today hangs on his wall.

Fast forward fifteen years to Jan. 11, 2021, when sitting on the exact same box stand overlooking the same field fifteen years later, Hunter had a similar experience. A big buck he had never seen walked out and Hunter downed him.

Hunter Bordelon, 28, lives in the village of Effie where he works with his dad in Dale’s duck call manufacturing company, Bayou Beast Duck Calls.

“I had hunted all weekend without success, and when Monday rolled around I was in no mood to go back to my deer stand,” Bordelon said. “However, my mom talked me into it. Plus the fact that some bucks had been moving around, indicating that the rut was about to kick in, so I decided to go.”

The family owns some 1200 acres in Avoyelles Parish located roughly 40 minutes away from their home. Hunter drove to the property, shouldered his Remington 7 mm mag rifle and climbed into the stand around 3:10 that afternoon.

“I hadn’t been in my stand long at all when at 3:30 four does appeared and headed for the feeder,” Bordelon said. “I was watching them when a bunch of crows sitting in trees down the way all took off suddenly like something had spooked them. I looked up and this big buck, a deer I had never seen, walked out and headed to the feeder; he didn’t seem to be interested in the does.”

After feeding along with the does for a few minutes, the buck made a move in Bordelon’s direction.

“When he got to about 320 yards he reached a point in the field, a big wide open field, and I got the crosshairs of my scope on him,” he said. “My rifle is sighted in at 350 yards and I felt comfortable with the shot, so I squeezed the trigger and he hit the ground. I called my dad and told him I had a big buck down but then the buck got back up, so I got another round into him and watched him take off dragging a leg.”

Getting down from his stand, Bordelon headed to where the deer was standing when he shot, followed the trail and found the buck, still alive, some 40 yards away. A final shot completed the deal and Bordelon was standing over a buck he had never seen.

“He was lying there with only the left side of his rack showing, and I was a little disappointed at first because he didn’t look as big as when I first saw him,” Bordelon said. “Then I turned him over revealing the right side and I thought, man, that was a lot better deer than I thought it was.”

The buck sported a 12-point rack, which featured a long drop tine. The inside spread was 17 inches with impressive bases, one 7 5/8 inches and the other 5 ½ inches. The heavy-bodied buck weighed in at 270 pounds. The buck was old with teeth practically all worn down. The taxidermist who measured the rack determined the buck was at least 8 ½ years old with a rack which measured 174 3/8 inches.

Two trophy bucks taken fifteen years apart from the same stand by the same hunter is a memory maker for sure.

About Glynn Harris 460 Articles
Glynn Harris is a long-time outdoor writer from Ruston. He writes weekly outdoor columns for several north Louisiana newspapers, has magazine credits in a number of state and national magazines and broadcasts four outdoor radio broadcasts each week. He has won more than 50 writing and broadcasting awards during his 47 year career.