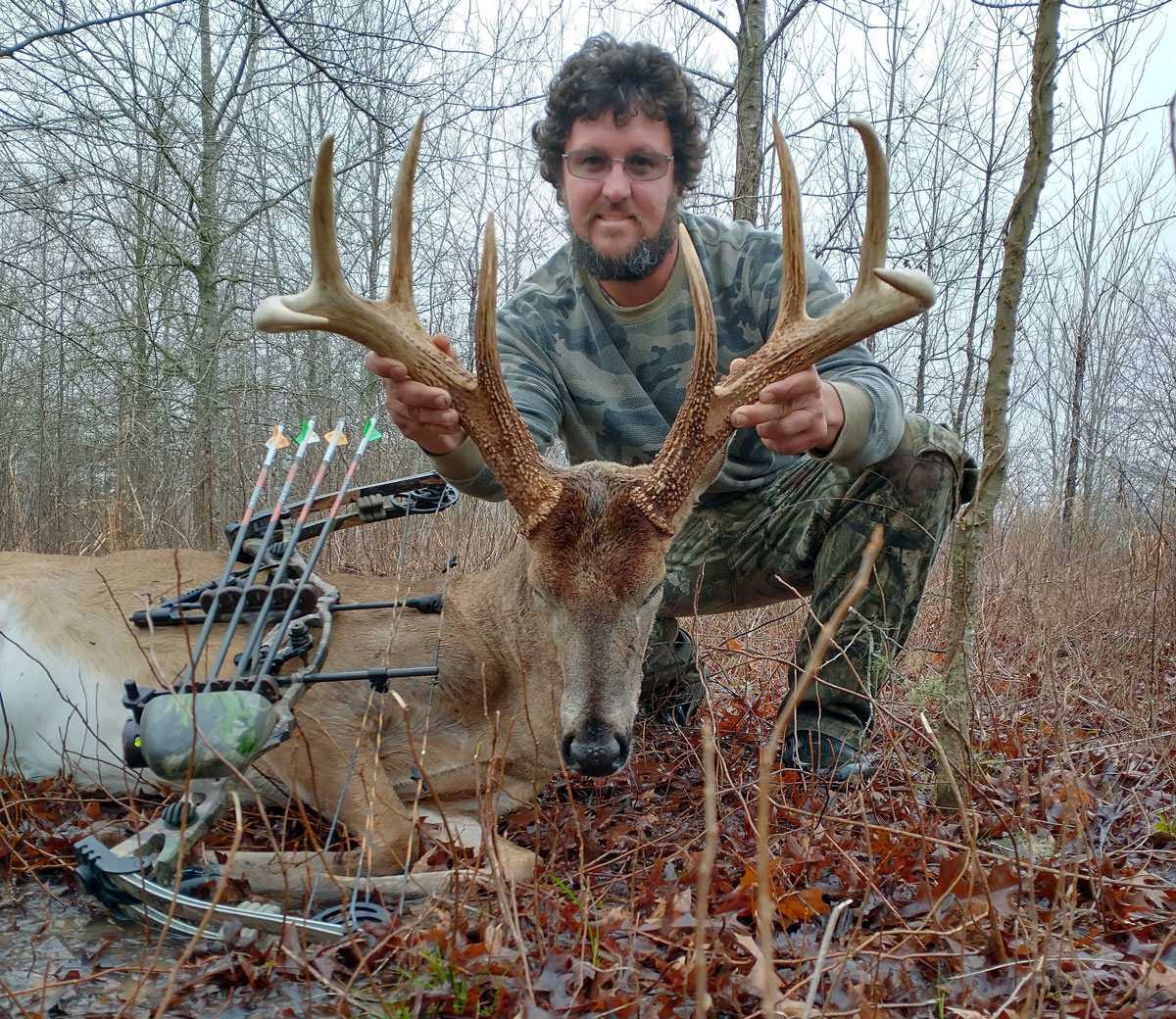 When 43-year-old Joey Woodard walked up to his downed buck, he got a surprise. Thinking he had arrowed a big 10-point he had been after, he found a huge 8-point instead, a buck that measured more than 160 inches of antler.

Woodard, who lives in Rosepine, is the owner of an electrical company and an avid bowhunter who does some serious scouting. On the day he downed the big buck, his GPS revealed that prior to getting on his stand the afternoon of Jan. 22, he had walked 9 ½ miles over the area he has permission to hunt in Natchitoches Parish.

“After walking the woods all day looking for likely bedding areas, I decided my best bet was to set up in an area where I had spooked a buck and doe a couple of weeks earlier,” Woodard said. “I wasn’t able to see the buck well enough to know what it was but I knew a big 10-point was hanging out and probably bedding in the area.”

With thick brush and low hanging limbs preventing Woodard from using his climbing stand, he decided his best bet would be to back up against a tree, which would give him an opening in case the buck made an appearance.

“I decided this was my best chance to see a buck if it moved from the thick tall patch of grass where I suspected he might be bedded,” he said. “So I hung my bow on a limb and just backed up against a small tree and waited it out.”

Woodard settled down for what would be a rather brief hunt as the hour was getting late. Also, it was cloudy with intermittent rain showers darkened the area even more.

“Because of the showers off and on all day, there was a good bit of water on the ground. In fact,” he said, “I was standing in shallow water. Around 5:15, I heard footsteps in the water in the bedding area. I watched a spike walk out of the area and move on through.”

A few minutes later, Woodard heard a slight noise that he thought could have been another deer walking in the water some 50 yards away. A few seconds later, more footsteps in the water let him know something was approaching.

“I didn’t know if it was another deer or maybe a hog but as the steps became more steady and regular, I saw movement and then I saw antlers,” he said. “I was certain I was looking at the rack of the big 10-point I knew liked to bed in that area. My heart started beating a little faster and I asked the Lord to calm me down and not mess up.”

The deer was getting closer and easing his bow from the overhanging branch, Woodard came to full draw and pointed his arrow at a small opening where the buck was headed. Woodard shoots a Hoyt Vectrix XL bow with a Grizzly Stick Samurai broadhead.

“The buck stopped to work an overhanging branch and I’m at full draw,” he said. “Because of a branch just over my head, my bow hit it just enough to cause the branch to move. I had to get into a slight crouched position and started to wonder if maybe I’d drawn my bow too soon.”

The buck finally stepped into the small clearing at 15 yards slightly quartering toward Woodard. Placing the pin on the buck’s shoulder, he released the arrow.

“I could tell I hit him as he whirled around to the right and bounced 30 yards into the thicket,” Woodard said. “Then he just stopped and stood for what seemed like 10 minutes looking around. Then he started slowly walking off.”

Waiting awhile, Woodard used the light on his cell phone to walk over to where the deer was standing when he shot. Finding no blood nor his arrow, he backed out knowing the temperature would be low that night and the meat wouldn’t spoil.

Going back the next morning, he recovered his arrow. Walking in the direction he had last seen the deer walking away, Woodard found the buck piled up. When he saw the rack, he was surprised to see it was not the 10-point but a big 8-point.

It’s for certain he wasn’t disappointed because the heavy symmetrical rack carried a 23-inch inside spread with bases some 7 inches each. The 200-pound buck, estimated to be 4 ½ years old, was unofficially scored at 162 3/8 inches.

About Glynn Harris 460 Articles
Glynn Harris is a long-time outdoor writer from Ruston. He writes weekly outdoor columns for several north Louisiana newspapers, has magazine credits in a number of state and national magazines and broadcasts four outdoor radio broadcasts each week. He has won more than 50 writing and broadcasting awards during his 47 year career.