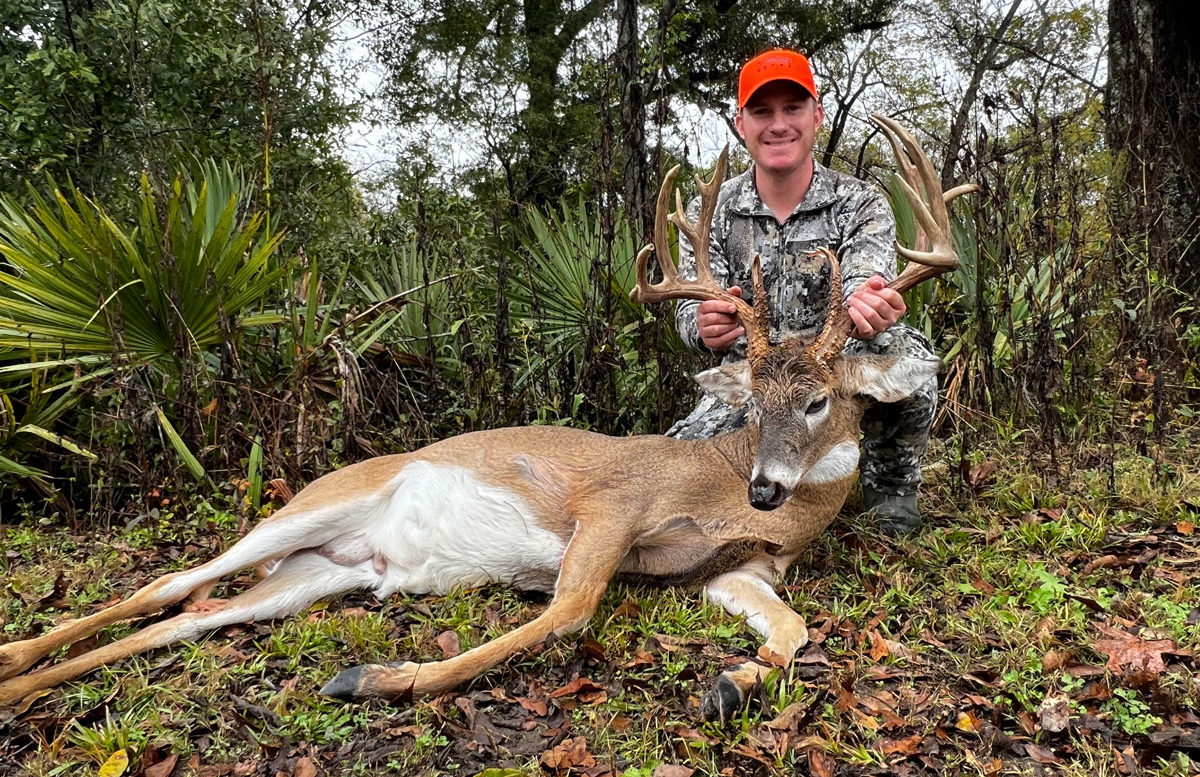 When Ben White, 30, an employee of the LA Sheriff’s Association who lives in Lake Charles, checked his trail camera on public land in Madison Parish, he was disappointed at not finding anything but does and small bucks. However, when he turned and looked behind the camera, he found a huge fresh rub on a 12-inch sapling that totally changed his game plan.

“I have hunted this area for the past several years and knew there were some good bucks in there,” White said. “I was discouraged to not find anything on my camera to get excited about when I knew there were good bucks around. But then, when I saw that huge rub, things started looking up for me.”

White started scouting in the direction the buck had to have come from to make that big rub. He didn’t find any other rubs or scrapes but he did find something that created interest.

“There was a thicket on the edge of a ridge with honey locust trees that were dropping beans, there were some oaks where acorns were falling and I found some fresh buck droppings,” he said. “I spent an hour trying to figure out the best way to hunt this super thick area.”

White found a tree he thought might work, one where he could hang his climbing stand. But climbing it for a look-see, he could only climb about 8 feet high because of the thick canopy higher than that.

“When I got in my stand to check it out, I could see no further than 20 yards and there were two small holes, one to the right and one to the left at about 12 yards,” White said. “I knew I would be quite limited in having openings for a shot.”

The following morning, Friday, Nov. 25, White awoke at his camp in the area on property he owns and saw that the rain that had continued all night had slowed to a drizzle. He decided to hunt the trail where his camera was located, but should there be nothing of interest on the camera he might try the thicket he had found the day before.

“When I got there and checked the camera, there was not a single picture on it and I decided this may be a good sign for me to hunt the thicket,” he said. “I knew I wouldn’t have a shot further than 20 yards at the most so I decided to take my CVA 350 Legend primitive firearm that packs a wallop at close range.”

Quietly slipping into his climber 8 feet up a tree, he watched a doe feeding along a trail shortly after daylight. He texted a friend and while texting, he saw movement in the thicket to the left.

“All I could see was brown 12 yards away,” White said. “He moved and I could see the tips of antlers. I watched for a few seconds, as he was not alarmed with me being so close; rain water dripping from leaves created sort of a cover for me as I saw him nibble on briars. He moved again, I could tell it was a good buck so I laid the phone aside and eased my rifle up and looked through the scope.

“I decided not to risk being detected and wait for him to step into the small hole there in the foliage. The only thing between me and his vitals was palmetto so I squeezed off a shot. He took off running, stopped at 20 yards and went down on his knees and rolled over. I got another round into my rifle and decided if he moved any like he was trying to get up, I’d put another round in him.”

White had lost a good buck in the past when bow hunting that he thought was down but managed to get up and run, and he vowed to never let that happen again.

“The buck picked his head up and tried to stand and I shot again, putting him down for good,” he said.

The buck was a healthy 4 ½-year-old weighing only 165 pounds. He made up for it, however, by sporting a rack of 15 points with 23 and 24 inch main beams, bases near five inches each and a 19 2/8 inside spread. Taking the buck to Simmons Sporting Goods in Bastrop, the score was an astounding 177 inches. The buck currently sits atop the primitive firearms category in the Simmons Big Buck Contest.