Jason Campbell admitted that all of his hunting efforts the past two seasons, every single day he went to a 160-acre tract he hunts in Webster Parish, were all about one big, 8-point buck, a nocturnal creature he told his buddies he should start calling “Dracula” because “he was allergic to daylight.”

Those efforts finally paid off the afternoon of Nov. 14, when Campbell put a single shot from his .280 TC through the buck’s shoulders at 100 yards, effectively driving a silver spike through Dracula’s heart.

“This is the only buck I had on my hit-list this season and last season,” said Campbell, 45, who lives in Shongaloo. “He was in the same place this year that he was last year. He showed up on my (trail) camera the second week of October.

But a week ago, Campbell noticed that those nighttime photos were getting closer and closer to daylight hours.

“The last four or five days, he was slipping up, coming in closer to daylight hours: right after dark, right before daylight,” he said. “Saturday afternoon, the rut in my area was in full swing, and I saw every buck I had on my cameras that afternoon — except him. He showed up (on camera) at 1:30 on Sunday morning; he had his nose right on a doe’s trail. I knew he was close and wouldn’t leave the area if she didn’t.”

Campbell was back in his box stand on Sunday afternoon, looking over a shooting lane in which he had some corn and Nut Grub.

“About 10 minutes to five, I had four or five does out in the lane,” he said. “Another doe came out, and he appeared about 200 yards away. He was making a scrape when I first saw him. I had to watch him for 15 minutes before I shot him. 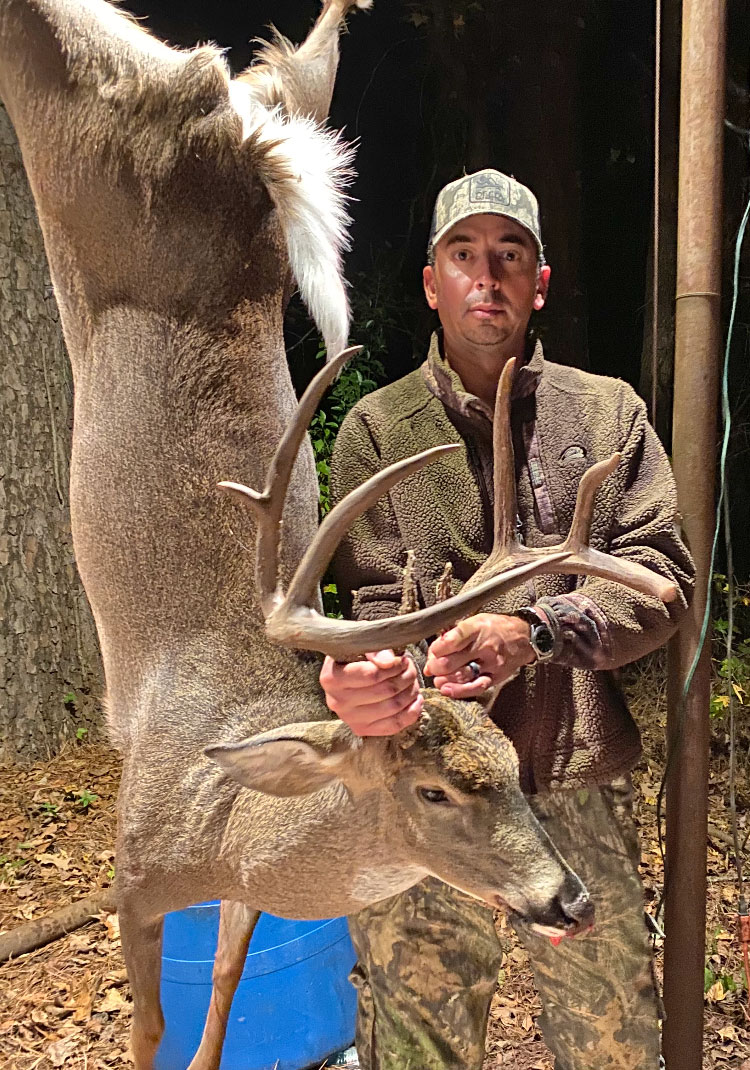 “He was on the other side of a fence, on my neighbor’s property, but when he saw that doe, he jumped the fence. He worked four scrapes and ran her off twice. All the time, he was getting closer, but he was still facing me.

“Then, a big 6-pointer came out — he had his ears laid back — and he bowed up and had to show him who was boss. When he turned to run that 6-pointer off, he turned broadside, and I shot him.

“He jumped. When I looked up, he was on his hind legs. He lunged out of the lane, but I heard him crash — of course, there were deer crashing everywhere. He fell right there. When I walked up to him, he grew. He was way bigger than I thought he was from the game-cam pix.”

Sullivan has five bucks mounted, all in the 140-class, including an 8-point, 148-inch buck he killed from the same stand 5 years earlier.

“I have never killed a 150-inch buck; that’s always been my goal,” he said. “I guess that doe and the 6-point buck killed him.”