Jeremy Martinez of Prairieville was hunting in Concordia Parish on Jan. 10 when he killed a huge buck. The 14-pointer has been green-scored at 162 inches and estimated to be more than 7 years old. But it almost didn’t happen.

A major storm was rolling through the area, and along with the unseasonably warm, 75-degree temperature, swirling winds were gusting at up to 30 miles an hour. And it was raining.

Martinez and his hunting buddies had seen the Concordia Parish buck on trail camera photos. But this was his first time seeing it in person. And because it was raining so hard, he wasn’t even sure it was the same buck until he saw it up close after killing it. 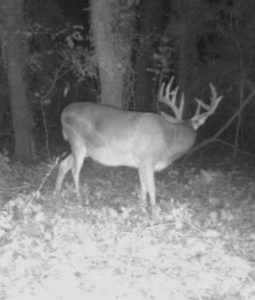 “I almost didn’t go that day because the weather was so bad. It rained, real heavy at times. And it was so warm. But one of my buddies said the deer were moving, so I went,” said Martinez.

Things looked even worse once he got to the stand.

“It was a mini tripod stand, and it didn’t have a seat. So I had to sit on one of the supports for the seat. It was so uncomfortable that I got out of it and hunted from the ground for most of the hunt,” he said.

Uncomfortable stand made the hunt worth it

But as daylight began disappearing, Martinez got back in the stand so he could see better.

“I got back in the stand with about 45 minutes of daylight left. It was so uncomfortable. But within two minutes of getting in the stand, I saw a doe cutting across the field. I took a look through my scope and scanned back, and that’s when I saw the buck. He was moving quickly. He was really trying to get across the field. So I yelled and he stopped. I shot him from about 150 yards away,” he said. 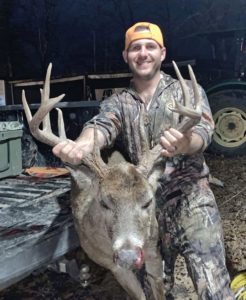 Martinez pulled the trigger on his Remington 700 .270. He felt like he’d made a good shot. But the Concordia Parish buck ran off. Once Martinez got on the ground, he didn’t see any blood.

“I searched for a while and didn’t find blood or any sign that the deer had been hit. Once it got dark, I backed out and called a guy with a dog. The dog found it pretty quickly, about 100 yards from where I’d shot it. It was a perfect shot right in the heart. And I don’t know how the deer made it that far,” he said.